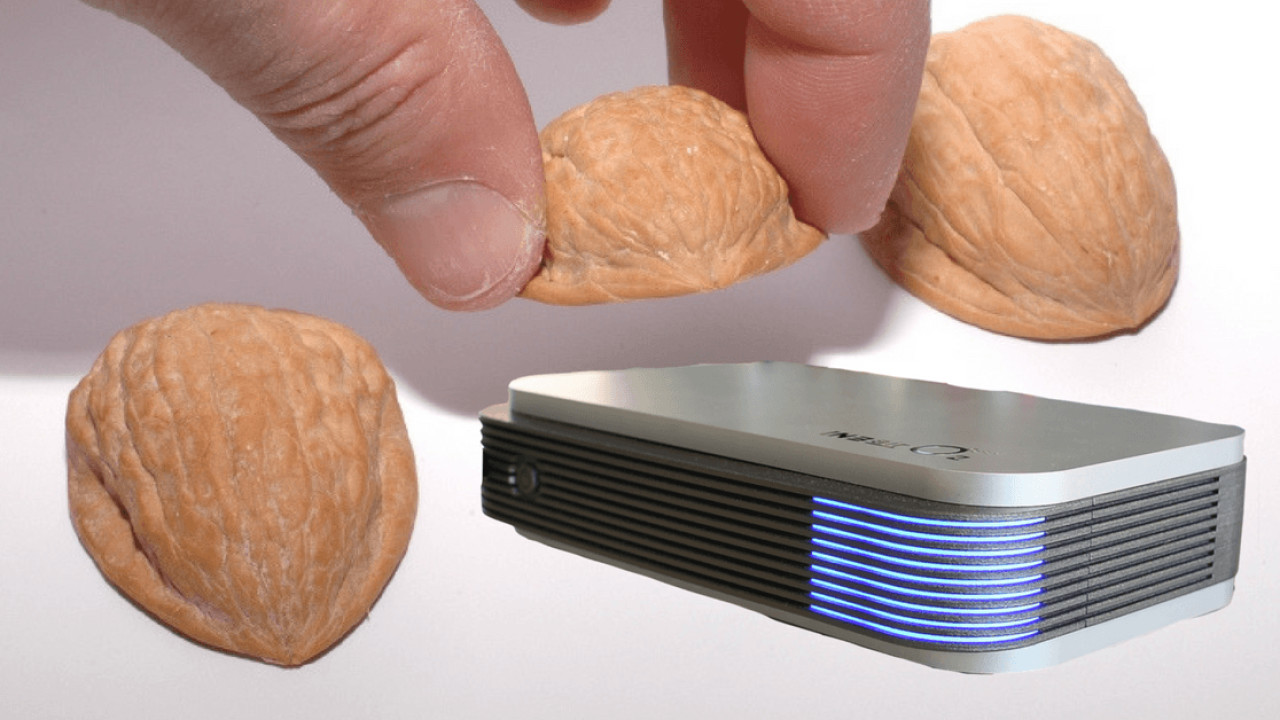 So, I’ve done some research and it turns out – hold onto your hats here – there’s oxygen EVERYWHERE. Someone really should monetize that.

Oh wait, what’s that coming over the hill? It’s the INBair 02!

The device, which has raised $106,868 on Indiegogo, is a portable “oxygen purifier.” You plug it in, slip the attached headset around your neck, and it proceeds to puff purified air in your face.

The idea behind the INBair 02 – and I use that term loosely – is that humans get tired and the reason we get tired is because of a lack of oxygen. I quote from Indiegogo:

“We have all been there… deadlines to meet, a crucial study-session, or an important meeting, and here comes that dreaded feeling of drowsiness. The reason? A lack of oxygen.”

The page goes onto say that oxygen levels around the home and office can dip during the day… and do you know the solution for that? This device!

Thing is though, there’s a lot of shaky logic flying around the description of the INBair 02. For example, the Indiegogo page claims:

Unfortunately, that’s bullshit. In simplistic terms, oxygen is used by cells alongside glucose (which we get from food) to create energy. Oxygen is part of the chemical reaction, not a source of energy itself.

Things are not looking good.

Okay, so everything about this is a heap of crap?

I’m not a scientist and, in the spirit of fairness, the INBair 02 does quote two scientific papers supporting its claims. One is how oxygen can help the brain perform better during demanding cognitive tasks, while the other is about how certain weather in cities can cause a drop in oxygen levels.

So, on the surface at least, there’s a foundation to the company’s claims about the device.

Now, probably the closest thing to the INBair 02 on the market is an oxygen bar, something the company mentions in its copy. There are some differences between the two though. The main difference is that in an oxygen bar, you’re delivered 90-92 percent oxygen, while the concentration from the INBair 02 is far lower (in the region of 40 percent, according to the company).

Well, are there any studies on oxygen bars?

Yes. Yes there are. For example, this one from Kansas University claims the use of oxygen bars “was found not to have an effect on subject’s energy, relaxation or stress levels.” Right then.

The FDA Consumer – the now defunct magazine of the U.S. Food and Drug Administration – also reported on Oxygen bars. In the piece, Mary Purucker, M.D., Ph.D., and a pulmonary specialist in the FDA’s Center for Drug Evaluation and Research (CEDR) said that “we’ve evolved for millions of years in an atmosphere of about 21 percent oxygen.” She went onto say that “people think oxygen is good, but more is not necessarily better.”

Another point we need to consider is how the INBair 02 works. In an oxygen bar, you’re being delivered the gas straight from a vat of the stuff, but the INBair 02 claims to deliver it to the user just by pulling it out of the air.

How does that work then?

I put the question directly to the company:

“There is a zeolite bed inside the unit which attracts nitrogen, lowering the percentage of nitrogen and increasing the percentage of oxygen in the air that passes through it. The nitrogen does not remain on the zeolite bed, but is released back into the ambient air, so INBair O2 does not increase the overall oxygen concentration in the room, only in the stream of air delivered through the headset.”

The device puts out 2L of concentrated air each minute, while the average human breathes in around 8L in the same timeframe. This suggests that you’re not actually getting much more oxygen than you would by, you know, breathing normally. And this also assumes that none of the 2L of concentrated air is lost to the surroundings before you breathe it in.

While it seems clear from the scientific theory that the INBair 02 is a whole load of nonsense, I didn’t go into actually testing it with that attitude. In fact, I’m much like Agent Mulder when it comes to weird gadgets: I want to believe.

Why don’t you try it out then, bud?

I was given a prototype version of the INBair 02 to test, so the unit I had wasn’t final. The device was heftier than I thought it would be and size-wise, it’s similar to your standard home router. Considering portability is one of the device’s selling points, carrying it around is possible, but you’re not going to forget it’s there.

It was easy to set up and put on, I also appreciated the fact that it didn’t get in the way of my headphones. Which is a good thing, because of that noise.

It emits a never-ending Darth Vader-esque exhalation. It has the ominous hiss of hospital machinery. Basically, it sounds a bit creepy.

And, uh, did it work? Did you feel more alert and refreshed?

I tried the INBair 02 on multiple occasions, with the time I spent using it varying between five and 30 minutes. And, well, I didn’t feel much of anything. The little puffs of air in my face were quite pleasant though.

In regards to increased concentration or alertness? Absolutely nothing. The biggest impact it had on me is that I became aware of my breathing.

Still, I’m willing to admit I might just have the perfect amount of oxygen already in my system, so I roped in a couple of other people from TNW’s editorial team to try the INBair 02 out.

The INBair 02 is like having a crack in your motorcycle helmet and being on the freeway. The breeze is sort of refreshing but ultimately it’s really distracting. Did not feel revitalized but my lips did feel considerably colder.

When I was asked to wear the INBair O2, I was at first skeptical. It looks like a cross between one of those tube-y things people wear in hospitals and a Britney Spears mic. And, it had already been worn by many people in the office. Germs.

But when I slipped that cool plastic over my ears, heard the soft whirring of the gadget, and felt the sudden rush of oxygen up my face holes, I knew something magical was happening. My brain suddenly felt like it had been dipped in liquid gold and was capable of literally anything.

You haven’t read the article, have you? So yeah, go buy it. Why the hell not?

No need for that attitude.

Look, the INBair 02 is a device created on shaky science that had no discernible impact on anyone who tried it. If you’re feeling tired and lethargic, try something science has actually backed, like getting more sleep, exercising, or eating better. The INBair 02 is like trying to get healthier by just wishing you are. Oh, there’s a word for that: placebo.

Update: After some maths, we updated a sentence in this piece that stated the INBair 02 doesn’t add any oxygen. Going on information the vendor supplied regarding the output of the device, it adds about four percentage points to the concentration of oxygen around the wearer’s breathing holes.