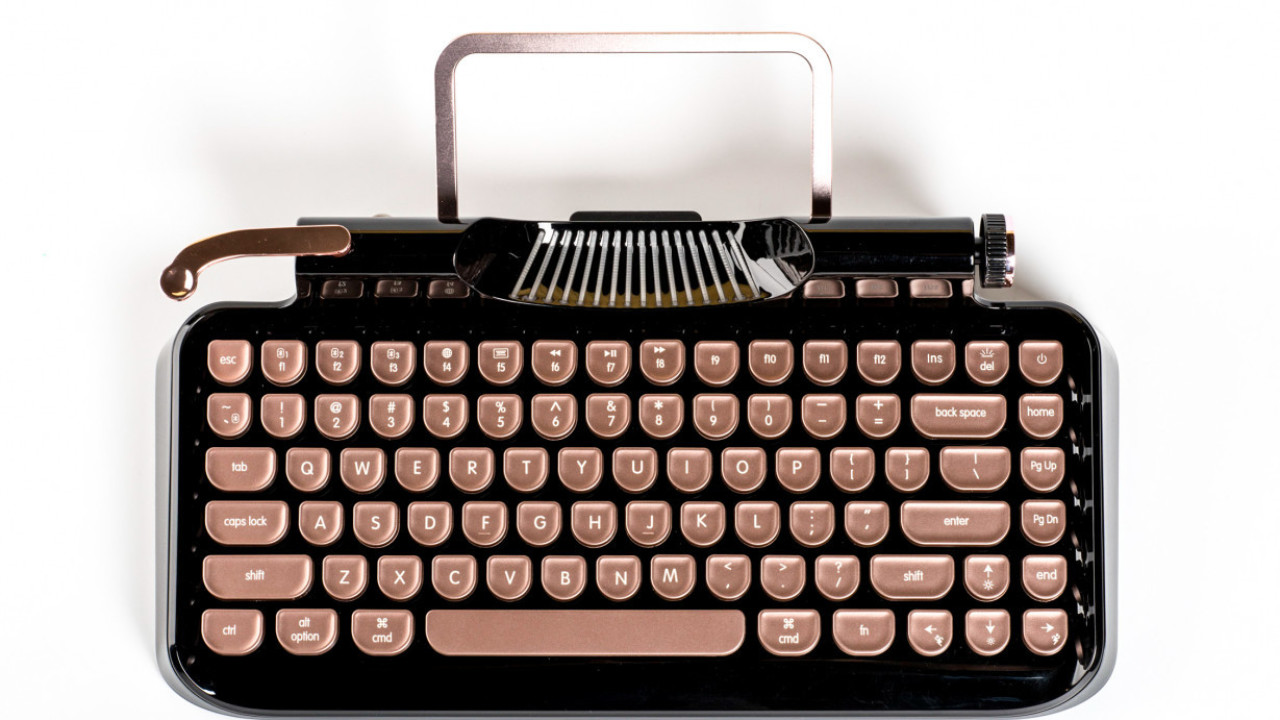 Typewriters are pretty much dead, except to two categories of people: Russian spies, who want to ensure that their kompromat reports don’t fall into the wrong hands, and hipsters, who I think we can all agree, are morally equivalent.

Pandering to the latter audience is the KnewKey Rymek. This mechanical keyboard looks just like a typewriter of yesteryear, but can connect to your laptop via USB, or to your phone over its built-in Bluetooth radio.

KnowKey sent TNW a review unit last week, and we’ve thoroughly put it through its paces. What we’ve found is a compelling mechanical keyboard that looks stylish and endearing, and is an absolute delight to type on.

As a keyboard itself, the Rymek is solid. It’s available with two variants of keyswitches: Cherry MX Blues, and Cherry MX Browns. I opted for the Blue keyswitches, as I prefer clickier keys, and they’re best suited for typing. That said, if you’re a gamer, you might want to give the softer brown keyswitches a try.

I was impressed with the consistency of the typing experience. Across the board, each key felt uniform, and had the same amount of clickiness, travel, and responsiveness. Typing on it was nothing short of delightful.

The review unit provided to TNW came with a US keyboard layout. This wasn’t a massive problem for me, as my menagerie of computers include some purchased in the US.

Weirdly enough, it came with the keycaps for “m” and “,” switched. This, according to KnewKey, was the result of a manufacturing error.

Fortunately, fixing it was easy, and didn’t require any additional tools. I was able to swap the keys simply by pulling them up, and returning them to the correct position.

As an added bonus, the ease in replacing keyswitches means modifying the keyboard layout is trivially easy, which is good news if you’re a fan of the niche DVORAK or Colemak layouts. It also makes it easy to clean the keyboard, should you accidentally spill some crumbs on it.

My biggest complaint was the keycaps felt a little inauthentic, particularly if you’ve used a typewriter before. Unlike the metal-clad typewriters of old, the Rymek’s keycaps are constructed of plastic, which doesn’t feel nearly as sturdy. Indeed, the entire keyboard is constructed out of plastic.

You can’t really do this if you’re slogging around something with the back-breaking weight of an old-school Olivetti, can you?

And it’s clear that portability is a huge emphasis of this device. It comes with an optional clip-in stand, upon which you can rest a smartphone or tablet on in landscape mode, allowing you to do some serious typing on your mobile device.

It also comes with a huge (for a keyboard) 2,000 mAh rechargeable battery, which offers all-week battery life while away from a charger.

Another quirk of the Rymek is that it comes with backlit keys. This isn’t something you often see on retro-styled keyboards (like older models of the Lofree Dot, for example), and is a refreshing change.

Most keyboards with backlighting embed the light within the key itself. The Rymek, however, treads a different path, and has an array of bright LEDs positioned above each keyswitch. This produces a nice sillhouette effect which looks absolutely gorgeous, while ensuring each key is easy to discern during night-time conditions.

KnewKey is currently crowdfunding the Rymek on Indiegogo. The Rymek comes in two different versions: Classy Black (which I reviewed), and Caramel White. The earliest of early birds can grab one for just $99, plus shipping and handling. When it eventually hits retail, it’ll go for $199.

It goes without saying that backing anything on a crowdfunding site comes with an element of risk, but the unit I recieved was a finished product, in commercial packaging. There ain’t no vaporware here, as far as I can see.

That said, if you’re not prepared to wait, there are alternatives. My colleague Abhimanyu raved about the Lofree Dot keyboard, which retails at $149. There’s also the truly stunning Azio Retro Classic keyboard, which goes for $189.