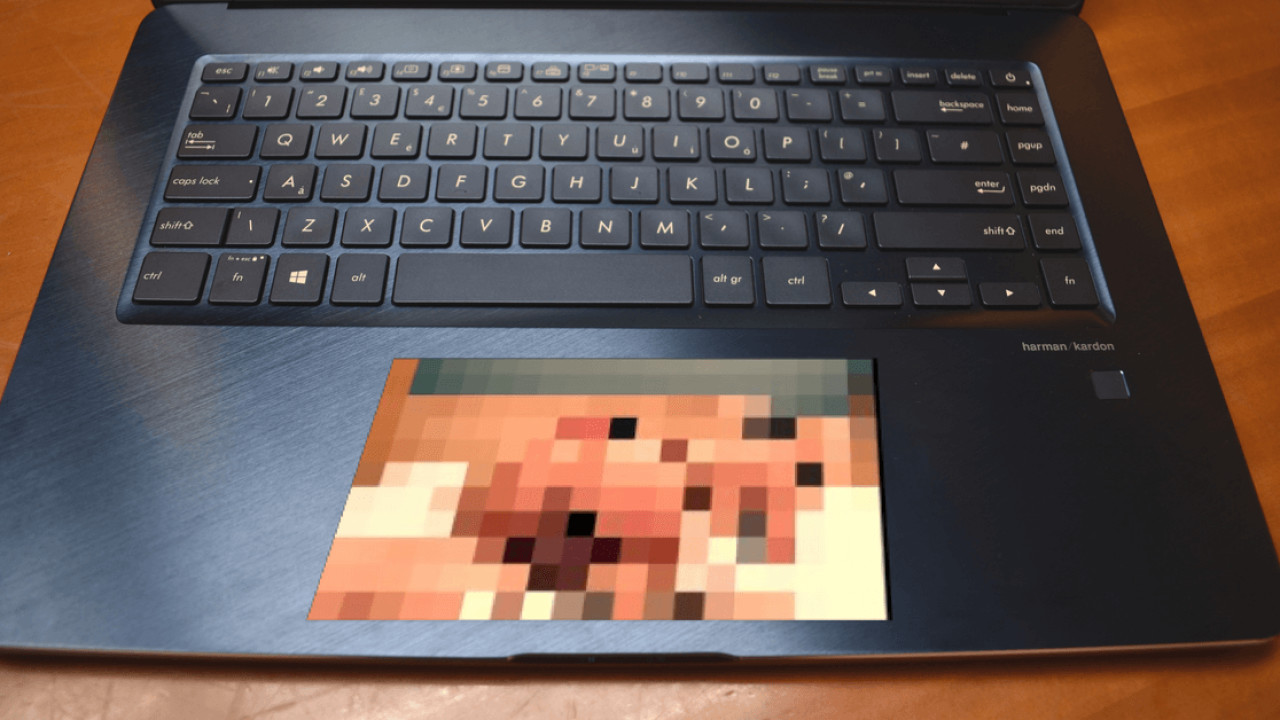 “Oh,” I hear you say, “I appreciate the update, but, Callum, why should I care about that?”

Good point, buddy. There’s something about the tech industry’s constant updates that feels like the equivalent of someone following you down the street, and yelling acronyms and numbers at you. Yes, it might be an interesting for a little bit, but soon you’ll be just wishing it would stop, asking god why you’ve been cursed in this way.

But, and this is why you should be interested, with the new ZenBook Pro, ASUS has done something genuinely different. Hold onto your hats, people, because the touchpad is now a screen.

Here’s a clip of its high techness in action:

A few apps will be integrated into the ScreenPad from launch, including Word, Excel, Powerpoint YouTube, and Spotify. By the end of the year, ASUS will release a ScreenPad SDK with the hope of getting a thriving development community working on the hardware.

On first reflection, it’s a cool idea. But, the more I thought about it, the more issues came up. Firstly, the idea of an extra interactive display on a laptop is reminiscent of Apple’s Touch Bar. This led to the question of whether the ScreenPad is a genuine innovation or just jumping aboard a hype train – something I asked ASUS directly.

Ivilina Boneva, Marketing Manager Systems Benelux, said that since the invention of the touchpad in 1992, little has changed. ASUS though, has been “thinking about how to improve user experience with a touchpad” and “the functionality and potential of the ScreenPad” is different to the Touch Bar.

It’s different enough to the Touch Bar to not be a straight rip-off, but the whole thing screams GIMMICK to me. Will the ScreenPad actually change how people do… anything?

“It has the potential to truly improve multitasking and allow synchronisation across devices in a new way,” Boneva told me when I ran the question past her. “We can only speculate how people will adopt and implement this innovation, but we are certainly excited.”

To translate that, ASUS has no idea.

In my mind, there are two things that will be vital if this sort of tech will be a success: build-quality and a development community.

If the ScreenPad is going to actually grabs people’s attention, it needs to be both as good as a normal touchpad and a phone screen. While the experience I had using the ScreenPad was positive, it didn’t feel quite as good as a normal one. Admittedly, this was a prototype and not the fully released product, so there’s a chance it will improve. The difference between the two was minimal, but these small irritations do tend to add up after a while – especially on parts of a computer in consistent use.

I can see that the ScreenPad might be a useful tool for improving productivity in some instances (quickly tapping out a sum, etc.), but I’m uncertain about what it actually adds beyond that. Watching a video on your touchpad while doing other tasks seems like something that could be better achieved with having an always-on-top video app or resizing some windows. On top of this,  a lot of the other applications – music control and calculator, for example – can be done with a keyboard launcher program like Alfred.

This is where the development community comes in. There’s a lot of potential with the ScreenPad, but this will only be realized if there are creative individuals working to push the boundaries of the tech, delivering apps that the average consumer really values.

If this doesn’t happen? Well, the ScreenPad will be just a novelty.