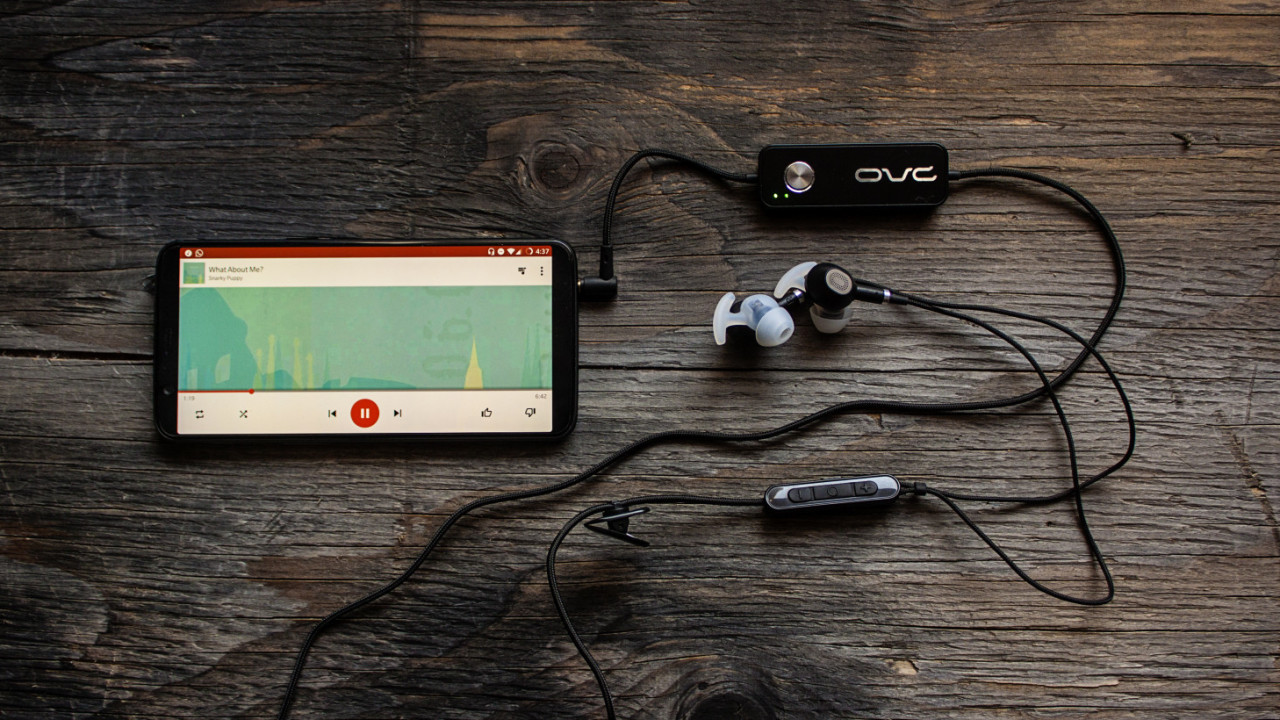 If you’re on the road a lot or often find yourself in crowded spaces, I can’t recommend noise-cancelling audio gear enough. While they’ve previously cost a pretty penny, this feature is now available on a wide range of inexpensive headphones and earphones, and I’ve just come across a pretty nice pair that’s worth checking out.

Chinese hardware maker OVC’s H15 earphones plug into your phone via the 3.5mm audio jack, promise 60 hours of active noise cancelling (ANC) performance, and feature a useful bass boost. They aren’t perfect, but I’ve quickly grown fond of them over the past couple of weeks of testing. Here’s why I’m a fan.

The H15s are largely unremarkable to look at, with simple designs for the earphones, the remote control and the ANC module that’s roughly the size of a flash drive. They come in a simple black finish, and it’s painfully obvious that the various components are all entirely encased in run-of-the-mill plastic. If you’re concerned about how your listening gear looks, you may not find much love in your heart for these.

To add to those woes, the ANC module and remote are separate, which means there’s a higher chance of these snagging on clothing or in your bag – and it also makes them harder to manage than regular earphones when you’re working out. That’s par for the course when it comes to ANC buds, but it would’ve been nice to see some design innovation to alleviate that issue.

ANC earphones work by listening for environmental noise with a mic and then playing an audio signal with an inverse polarity, so you don’t hear much of the sound around you.

Toggle the ANC switch, and you’ll instantly notice most low-frequency sounds around you quieten down, from street traffic to whirring fans, and construction. You will, however, still be aware of higher-pitched sounds, like strains of music, people talking, and some vehicular engine noises.

OVC claims that the H15 can reduce noise by about 30dB on average. I find that hard to believe, because, according to the always-reliable folks at the Wirecutter, Bose’s $350 QC 35 II headphones cut noise by about that amount. Having tried the previous version of those cans, I can tell you that the H15s aren’t nearly as effective. While Bose’s offering can make you forget where you are if you close your eyes, the effect of turning on ANC on the H15s is more akin to rolling up the windows in your car.

That’s not bad at all, given that these are significantly smaller than headphones, and cost far less than premium noise canceling gear. I find them tremendously useful while getting around the bustling streets of my hometown of Bangalore, India, where loud engines and incessant honking harmonize cacophonously to create the worst commuting soundtrack possible. The H15s work well enough to drown out most of the unpleasantness, while still allowing me to remain aware of my surroundings and get around town safely.

OVC claims that the ANC system can work for up to 60 hours on a single charge, which is great. It means that you don’t have to remember to charge your earphones every single time you come indoors, and that you can comfortably use these on long flights or road trips without a fuss.

For a $50 pair of earphones, the H15s are surprisingly good, with a fair amount of detail and a bright sound profile that works well for rock, pop, and other contemporary genres. You will, however, notice a bit of muddying towards the higher frequencies when things get busy, say, during an energetic chorus.

The bass boost has an almost overwhelming effect: it’s almost jarringly obvious when it’s turned on, adding what feels like plenty of headroom across the lower end of the spectrum. It makes for a vastly different listening experience than when you have it turned off; it’d have been nice to have the option to adjust the boost strength rather than toggle a switch.

The boost is less prominent when used with ANC turned on. In that mode, it’s nice to have a bit more low-end to round out the sound after it’s been thinned by the noise cancellation system.

The H15s do fine with breezy pop and soul like Amber Navran’s Speak Up, Toro Y Moi’s Anything in Return, and Dark New Day’s Black Porch Acoustic Sessions. But they’re not my favorite for black metal like Celeste’s Morte(s) nee(s), modern metal like Deftones’ White Pony, or Snarky Puppy’s intensely varied and detailed instrumental cut, We Like It Here.

The buds are comfortable enough going in your ear, but keeping them there can be a challenge, particularly if you’re working out: the ANC module and remote add a fair bit of weight to the cable, and that can cause the buds to fall out every so often. However, they’re fine for simply walking about, provided you snap on the pair of interchangeable buds that fit you best.

OVC’s H15 buds are great for people who are trying out noise-cancelling gear for the first time: they’re cheap, effective, and deliver decent audio performance for their asking price.

If you’re used to premium ANC headphones like those from Bose, Bang & Olufsen, and Bowers & Wilkins, and want an earbud version, these might not be your best choice, as the occasional lack of clarity with higher frequencies can feel like a let-down.

Basically, they’re not my favorite earphones at $50 or less – but they’re great to have around when I’m out and about. India is a noisy place to live in, and I can certainly use more moments of quiet. As such, it’s lovely to be able to whip these out and turn down the volume. Heck, I frequently used these without playing any music or podcasts: every time things got too loud around me, I’d simply hit that ANC button, and all would be right with the world again.

Find OVC’s H15 earphones over at Amazon US. In the event that you don’t care to charge up yet another device, consider Xiaomi’s USB-C ANC earphones, which cost roughly the same amount.