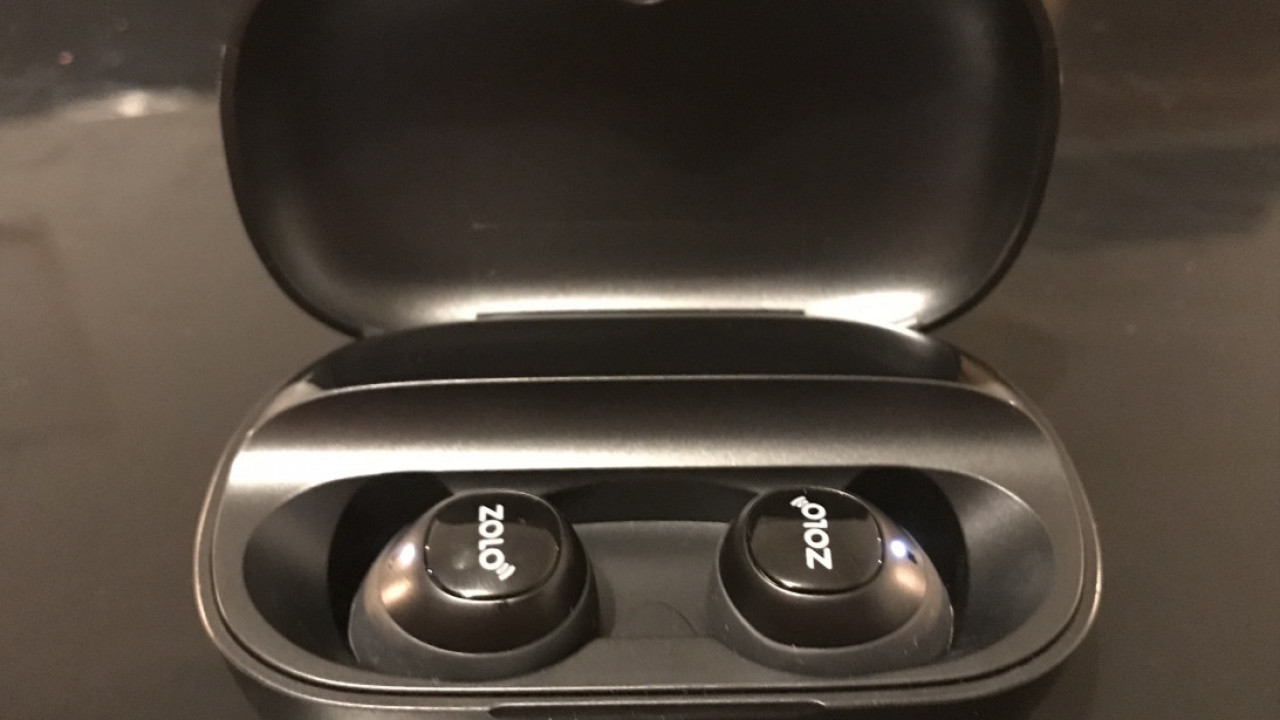 Anker — sorry, Zolo, which is apparently a sub-brand of Anker — has a new pair of totally wireless, in-ear Bluetooth headphones. The Zolo Liberty works much like Apple’s AirPods, but has a much more compelling price tag at $99.99.

Beyond the price-tag, the Zolo Liberty has a lot to shout about. Let’s start with endurance, which is a major area of concern for anyone looking for a new pair of Bluetooth headphones.

The buds have a projected battery life of 3.5 hours, which isn’t far from more expensive AirPods, which get five hours. In my experience, the buds lasted a bit longer than advertised, which was certainly welcome.

When the Zolo runs out of juice, you can drop them into its battery case, which recharges them quickly.

Speaking of which, you can expect to get 24 hours out of the Zolo Liberty’s battery case. That’s enough to get you through the day, although I must admit, it is somewhat annoying having to stop listening to music to recharge the buds. That’s true of every device in its category though, and shouldn’t be interpreted as a criticism of the Zolo Liberty specifically.

A common criticism of totally wireless headphones is that audio quality tends to be mediocre. That’s the trade-off you make in exchange for ditching wires wholesale.

The Zolo Liberty didn’t really blow me away. Audio quality was solid, but that’s about as much as I can say for it. Mids were loud and clear, which was great for voice calls and podcasts. Highs were solid, and didn’t feel shrill or painful.

However, bass felt a little flat. This was particularly noticeable on songs with an unmistakable bassline, like U2’s With Or Without You, or some of the louder tracks from Aussie folk-punk band Camp Cope.

In short, the Zolo Liberty is pretty middle-of-the-road.

Let’s talk about phone calls. You can use the Zolo Liberty like an ordinary Bluetooth headset (although you will look a tad insane, talking to thin air with no phone in sight).

Overall, I was satisfied. Microphone loudness could be better. Although pretty much everyone I called with the buds could make out what I was saying, I had to speak louder than I otherwise would.

Where it really comes into play is in portability and looks. They say beauty is in the eye of the beholder. Personally speaking, I dig the look of the Zolo Liberty more than I do the AirPods.

For starters, there’s no weird dangly bits. The buds fit snugly into the ear, and are barely visible from the outside. This is a stark contrast from the more ostentatious AirPods.

I found them to be comfortable to wear, too. And I say that as someone who doesn’t really enjoy using in-ear headphones.

My biggest bug-bear is reliability. From time to time, the left bud would cut out. In most cases, this is for a few seconds. In that scenario, the Zolo Liberty corrects itself and re-establishes the connection. No big deal.

But sometimes, that doesn’t happen. Fortunately, this is easily fixed by placed the earbuds into the battery case for a few seconds in order to force a restart. It’s still pretty annoying though.

It’s worth mentioning that phone calls go through the right bud, so the device’s occasional reliability issues won’t get in the way of your important conversation.

From what I can tell by Amazon’s customer reviews of the Zolo Liberty, this is an ongoing issue not limited to the review unit provided to me by Anker. This is worth bearing in mind before you drop $100 on them.

Who should buy the Zolo Liberty?

So, the million (er, hundred) dollar question: Should you buy the Zolo Liberty? Or should you fly Zolo? (Sorry.)

Despite the endemic reliability issues to the device, I thought the Zolo Liberty was a solid effort. By the standards of completely-wireless headphones, audio quality was decent, and they were comfortable.

Battery life is decent. With nearly four hours of juice, the Zolo Liberty will cover pretty much everyone’s commutes. However, I wouldn’t depend on them exclusively, and would always have a backup pair of conventional headphones to cover things like listening to music while working, or taking a long flight.

I can see these being favored by fitness fanatics. In addition to being sweatproof, they also tend to stay put, even when doing some pretty vigorous movement.

If you’re looking for something discreet, comfortable, and affordable, the Zolo Liberty is your man. There are some flaws to overlook, sure, but at the price point, you’ll be hard pressed to find something better. You can purchase it on Amazon for $99.99.