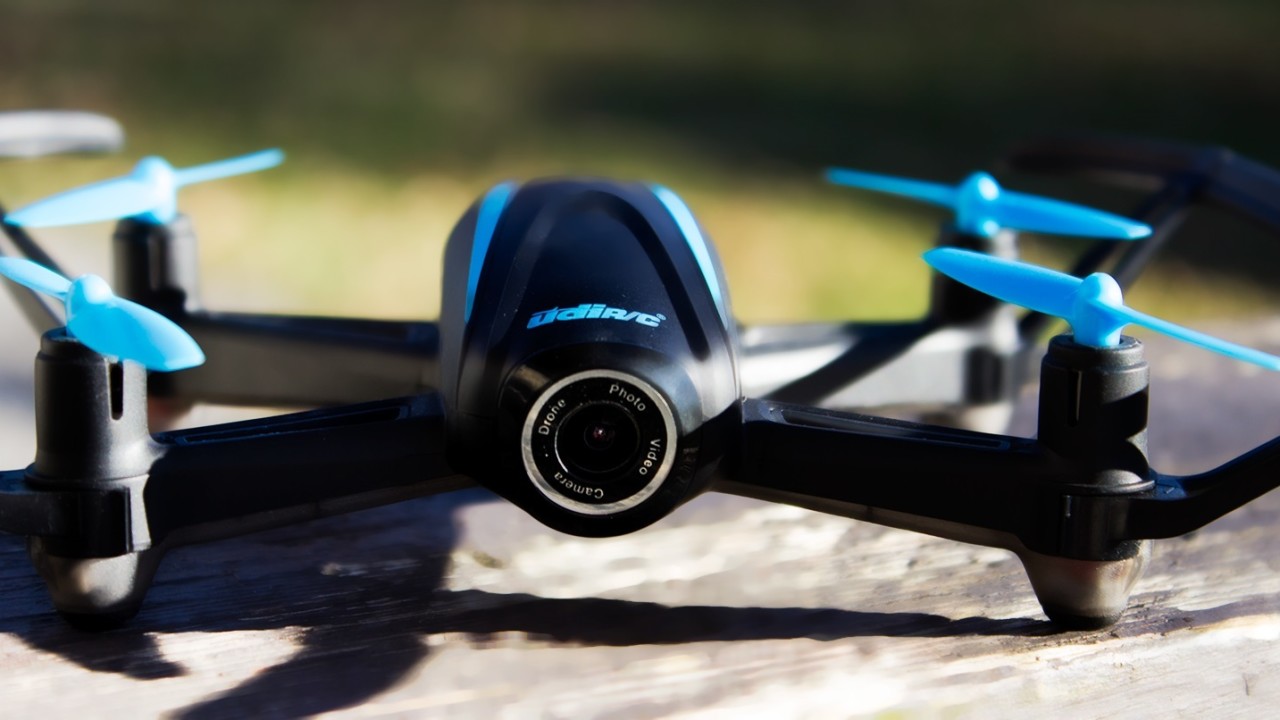 While I’m certainly not a hardcore drone enthusiast, I love toys that get kids interested in technology. Force 1’s U34W Dragonfly is an entry-level drone advertised as being “easy to fly” and “for beginners.” I figured it would be the perfect drone for my family to try out, so we took one to the park.

Right out of the box I was impressed. The Dragonfly is a fairly small drone, at only about 26 cm across, making it nearly palm sized. And the camera’s position gives it a bunch of personality. It ships with extra propellers, two batteries, a charging adapter, and a remote control.

The dragonfly doesn’t require a smart phone to operate or fly, but you won’t be able to take advantage of the camera without one. And in order to record video clips you’ll need to provide a micro SD card.

The controls are simple and, despite the fact it’s an entry-level device, it still has some nice features like headless mode (you can steer it without knowing what direction the ‘front’ is pointing) and one-button takeoff and landing.

It has range and battery alarms, the former I never needed and the latter I always lamented. Not that the battery time is bad; I actually experienced about 10-12 minutes of non-stop flying time on a charge.

Aesthetically it’s a good looking gadget. Black is fine, and at least here they add some bright blue racing stripes and props.

I like the siderails, they look good and they work well. More than a couple of times they were responsible for the drone bouncing off an object and remaining aloft instead of immediately sputtering into a death-spiral.

And it’s a tough drone. Since there were some beginners flying it, at a park in the midwest, it managed to ricochet off of trees, clash with giant slides on the playground, and eat its fair share of turf. None of this was on purpose, but aside from having to snap some propellors back on once, and pop the battery back in another time, our play time was never halted.

Flying the Dragonfly is a breeze. It takes a couple of minutes for a total novice to get the gist and manipulate it with relative ease. Due to its size and relative power it is pretty susceptible to even slight gusts of wind, but by the time we were on our second battery everyone had the hang of it.

I like the way the dragonfly looks and flies, but it’s a noisy little thing. Don’t get me wrong, it’s not unusually noisy, but it does sound like a pack of angry hornets. It’s advertised as an indoor/outdoor drone, but be forewarned it’s not like an RC car. You’ll probably make the kids take it outside.

The camera was fun to play with and I would definitely bring this on a family hiking trip. I’d have no problem letting younger children (supervised of course) fly it around – and while it’s by no means disposable, you won’t lose a paycheck replacing it if the kids fly it into the surf.

With a 720p camera that shoots in 120 degree wide-angle you’re getting pretty good pictures and videos. It was more than I expected from a beginner drone.

The Dragonfly surprised me at nearly every turn. The remote control has a pull-out mount for a smartphone that worked perfectly with my Galaxy S7. The range was more than adequate at every bit of 80 meters, despite the alarm going off at about 60.

And perhaps most surprising was how simple it is to go from unpacking the box to flying like a pro. Setup involves a few steps that, while not intuitive, are simple and easy to perform. Once the device and its remote are synced you’re good to go. Adding a smart phone to the mix is as easy as setting up WiFi (the drone broadcasts its own) and connecting to it. The app is simple to use and makes it easy to share your images and videos.

I was impressed by the Dragonfly and I highly recommend it for beginners and children. With a price tag of $129.98 on Amazon, it makes a great device for any first time quadcopter pilots on your shopping list.