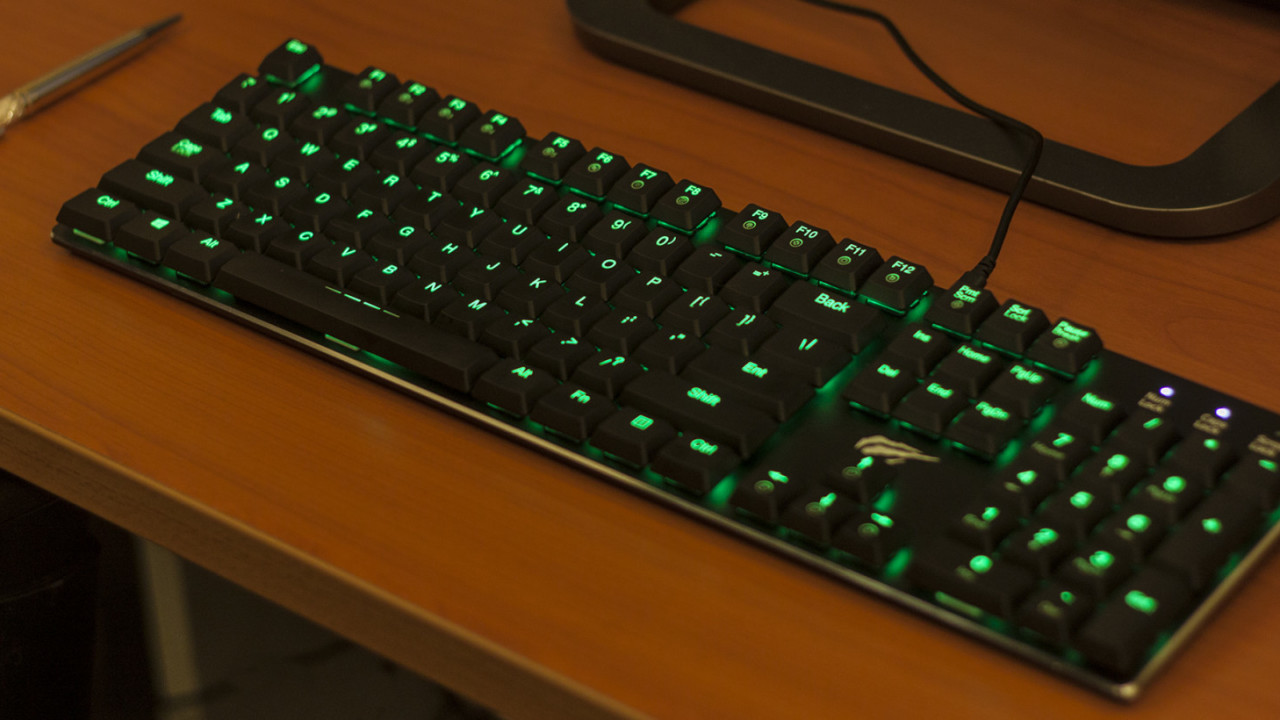 I thoroughly enjoy mechanical keyboards for the tactile feedback they offer as you press down on each key that’s supported by a precisely manufactured switch; I wrote a love letter to these wonderful devices a while ago, and the novelty isn’t likely to wear off anytime soon.

Of course, they can prove to be a bit of an acquired taste. And if you’re a gamer, chances are you’ve been thinking about getting a keyboard with RGB LEDs that changes color either at your command or in a programmed sequence, to help your rig stand out from the crowd.

Havit wants to get everyone in on the fun with its new 395L keyboard, which not only comes with said switches and lighting, but also features a slim build that makes it a fair bit more portable than the competition, and a reasonable price tag to boot. Should it be the next device to grace your desk? I clacked on the 395L all through the past few weeks to find out.

At first glance, the Havit 395L looks like any other 104-key wired keyboard, with a clean layout, legibly printed characters, and a detachable microUSB cable. Plug it in, however, and it comes alive with a riot of colors that dance across the keys in a range of patterns that you can cycle through.

That’s par for the course with most gaming keyboards, of course. But what’s interesting about the 395L’s lighting is that it doesn’t require any drivers to configure; right out of the box, you can set up five always-on lighting schemes, and cycle through six lighting sequences by hitting the Function keys.

While some other gaming keyboards feature futuristic shapes, the 395L keeps things simple and removes all fluff, so as to be as compact as possible while offering a comfortable 104-key layout. At just 22.8mm tall, it has one of the lowest profiles of any mechanical keyboard out there. As such, it takes up less room in your backpack, and also affords 7mm less travel between the resting position of each key and the point where it bottoms out when you press them.

There are just a couple of design flourishes on the 395L: a tattoo-like eye logo above the arrow keys, and chamfered edges along the keyboard’s aluminum alloy frame. Overall, the look is simple and understated, and suited my needs perfectly as I’m a casual gamer who’s more concerned about a comfortable typing experience through the work week.

The 395L lets you set up five different persistent lighting presets to light up only the keys you choose, which are handy for use with different bindings in FPS, strategy and RPG games. I found this useful when playing Cook, Serve, Delicious! 2, a surprisingly challenging cooking game that requires nimble reflexes and a good command over several keys to execute customers’ increasingly complex orders just right.

The other presets cause the keys to light up in various patterns, such as a gentle ‘breathing’ motion, a rainbow ripple that spreads from each key you hit, and a ‘raindrop mode’ where random keys light up in different colors, and a luminous snake that crawls across your keyboard. It’s all pretty fun to play with, though if you just need to type, you’ll be better off using the constant light mode at your desired brightness.

Speaking of which, you can adjust the luminosity and speed of light patterns on the fly, without the need for any software. That’s good, because you don’t need to download and keep another app running, but it also means that you won’t get the flexibility that software like Razer’s allows you, if you want to configure your lighting setup just so. Plus, without on-screen instructions, you’ll have to consult the manual to figure out how to get things to work as you like.

That’s because the 395L uses PG1350 Low Profile Blue Switches from Kalih, a Chinese manufacturer that’s often compared to the more popular Cherry brand because the majority of their offerings share specifications with switches from the German manufacturer.

The 395L’s switches are about 7mm shorter than most other mechanical keys, along with a smaller key stroke distance of 3mm, and a lower operating force of 45±10gf, as compared to the 60±10gf of the Cherry MX Blue.

That means the keys are a lot easier to press down – a plus for both games that require a fair bit of rapid firing, as well as quick typing. Coming off of a Cherry MX Blue-equipped TVS keyboard that’s made here in India, I was delighted to find that the Kalih switches allowed me to type faster and with less effort than before, while also sounding a wee bit quieter.

Beyond those factors, I found the tactile feedback awfully satisfying; of the various switches I’ve tried, I found these to be the most enjoyable to type on.

As for gaming, the 395L holds up pretty well in various circumstances. I’m big on Warframe, a third-person shooter set in space with robot exoskeleton-clad characters that demands quick movement and a mix of melee and ranged attacks. This keyboard offered a much more satisfying experience when mashing buttons to bash aliens with wild abandon, as well as enough control to get my long-range shots in. Unsurprisingly, it also served me well as I used a range of keyboard shortcuts to order around a band of elite ninja warriors in the strategy game Shadow Tactics: Blades of the Shogun.

The downside to these Kalihs is that you won’t be able to easily replace the keys with anything but the company’s low-profile switches. Having said that, the 395L feels pretty durable overall, so I don’t foresee a need to change the switches anytime soon.

The 395L is slated to get a software driver so you can configure the lighting patterns more precisely, and set up media keys for playback and volume control. The app isn’t yet ready and I really miss the latter, so I had to knock off a few points for that. I’d like to be able to use on-screen controls to change up my lighting, and use the Function keys to handle my streaming music and video players.

The 395L is a great starting point for someone who wants in on the world of mechanical keyboards: It’s well priced, the keys feel great without being distractingly different from what you might be used to, it’s lightweight and portable, and comes with a pretty lighting system in a conservative design that’s equally at home at a LAN party or your study.

At its asking price of $80, Havit’s offering is among the cheaper mechanical gaming keyboards you can find in the market. It’s also one of the slimmest and lightest models you’ll find among mechanical keyboards in general, so if you tend to lug your gear around for gaming sessions, this is certainly worth considering. It’s also a good choice for folks who are trying a mechanical keyboard for the first time, as the additional key travel isn’t a huge shift away from standard membrane keyboards.

That being said, there are several options from folks like Logitech and Razer that warrant higher prices, with features like braided cables, additional USB ports and headphone/mic jacks, spill resistance, and wrist rests. But because they’re more expensive, they’re hard to recommend to first-time users of mechanical keyboards or to people who just want a better typing experience (both of which can be had for a lot less money).

Other than that, this is a fantastic keyboard for both gaming and typing. While the feel and feedback from the keys may not be for everybody, you can rest assured that they’re consistent and durable, even if they aren’t from a reputed German brand. The slim design also means that the 395L will fit on just about any desk or keyboard tray. I’m happy to recommend this to anyone who’s looking for a mechanical keyboard with a bit of fun and flair up its sleeve.

Find the 395L on Havit’s site for international shipping, or on Amazon.com if you’re in the US (and use the coupon code N5QSRCYT to get $8 off).