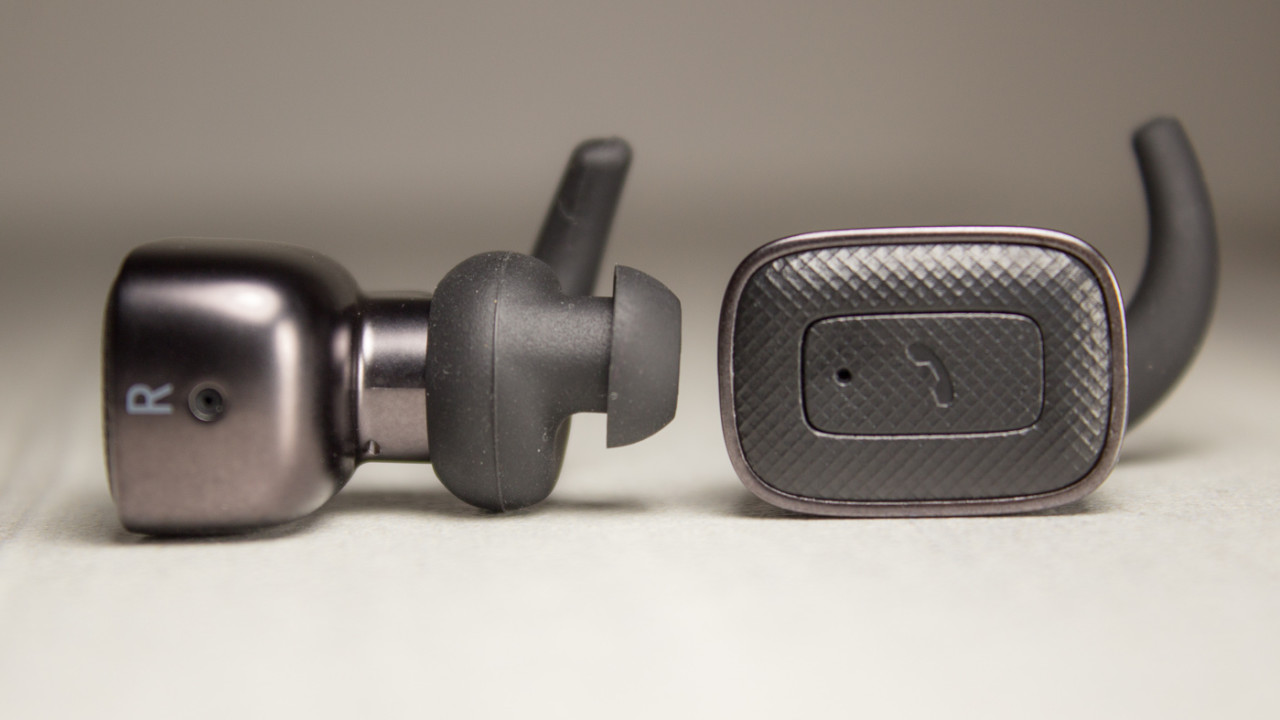 The SmartOmi Q5 truly wireless headphones are priced on the low end, but they pack some pretty decent high notes. They could use a little more “oomph” (read: bass), but otherwise there’s a lot to like.

These earbuds, while small, are not innocuous. They look like James Bond’s cuff-links, which I hold as a point in the Q5’s favor. After a decade of seeing people with giant Bluetooth dongles hanging from their heads it’s easy to forgive the boxy design. The fact they come in both black and white is a good thing, though it would be nice to see manufacturers embrace brighter, bolder colors.

I found the Q5s comfortable, and I’m always surprised when a set of earbuds doesn’t bother me – most do. These did feel a bit heavy, but it wasn’t a problem and I didn’t find myself being unusually fatigued after longer listening sessions.

They’re packaged with extra inserts in different sizes, which is always a nice touch.

For a couple of tiny earbuds they’re surprisingly feature-packed. Both headphones connect via Bluetooth and they come synced right out of the box. I long pressed the right one, then the left. A robot voice informed me which was which and that they were connected. The setup was very easy.

The device features call answering, song control, and muting – it also has a built-in 8mm microphone that worked clear enough for me to use in a Google Hangouts teleconference for work. The Q5 makes a pretty fantastic hands-free headset, but be forewarned calls are handled via the right earpiece only. Both earpieces work together to bring stereo music, however, with mixed results.

The quality wasn’t exactly bad, it just didn’t wow me. They’re pretty tinny and the built-in sound profile tries to compensate for what is, presumably, a very small speaker by hammering on a lot of digital presence, but without any headroom it just makes everything sound like pop music.

This isn’t always a bad thing. Nirvana’s “Very Ape” sounds fantastic through the Q5 thanks to a very punk rock mid-to-high range emphasis. The problem occurs when listening to a song like Jidenna’s “Long Live The Chief.” The entire track sounds slightly ‘off’ because you can’t hear the reverberating bass hits.

It’s a little bit unfair to pick apart the sound quality of a device that costs a fraction of what a pair of Apple’s AirPods or Google’s Pixel Buds do, and in all fairness they hold up okay to similarly priced earbuds that have wires.

Technically, as far as specs go, they’re only interesting for the simultaneous stereo Bluetooth connectivity. The battery failed to impress, I was only able to get about two to three hours on a charge. They did ship with a USB charging cable with two ends, so they can be charged together using only one USB port.

Despite some missing lows, they still sound good enough to recommend as an entry-level headset – especially if you’re looking for a totally wireless experience on the cheap for your next jog. Plus the ease-of-use can’t be overstated.