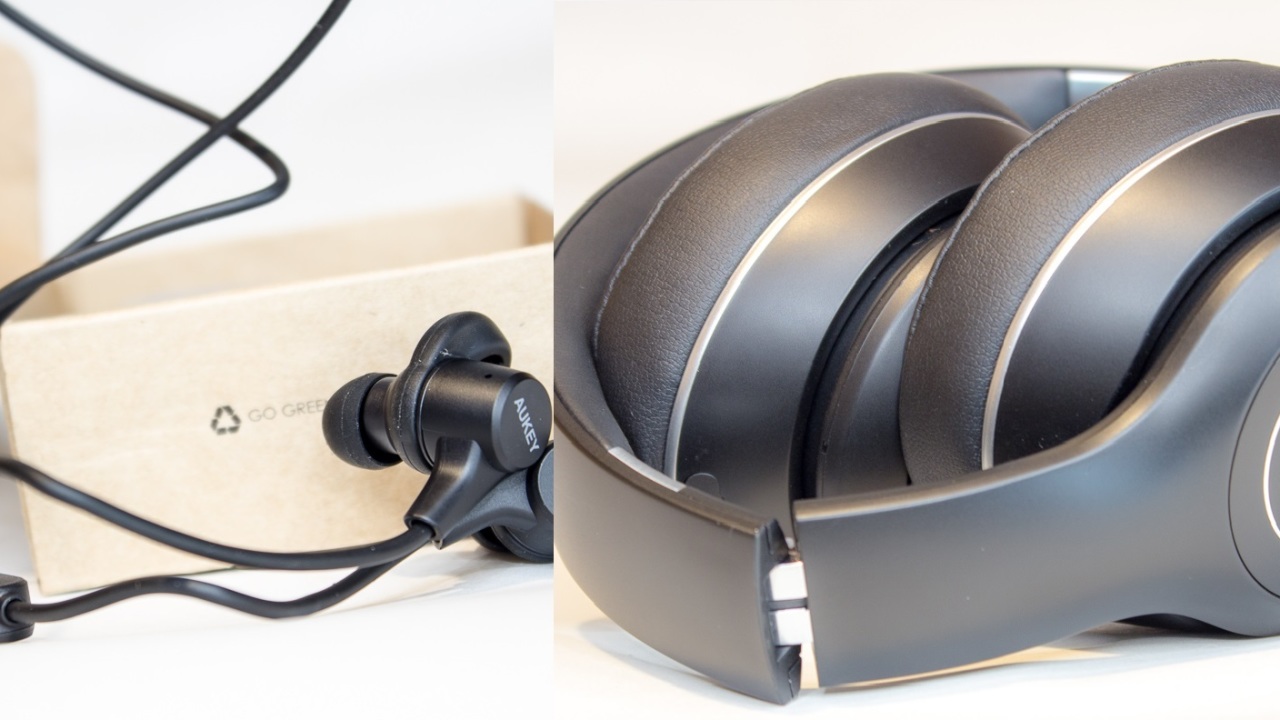 I checked out two sets of headphones manufactured by AUKEY to see if its mid to low-priced offerings could provide an alternative to costlier options without sacrificing the soul of my music. My results were mixed, but I’d still recommend both.

The first set I checked out was the AUKEY EP-B40 Latitude wireless headphones. These earbuds are wireless in the sense that, while they connect to each other via wire, the device uses Bluetooth to connect to your music source in lieu of plugging into a headphone jack.

It features 8mm drivers, 8 hours of playback on a charge, and 3 EQ modes. Aesthetically it’s a modest product, there’s not much to work with so it maintains a low profile in subdued black. It has volume buttons and a center button that serves as the EQ switch and power button. An LED indicator completes the package.

I liked the construction, it’s built well enough to be called “inexpensive” instead of “cheap,” which is an important distinction in consumer products sold at modest prices.

Where it really counts, however, is in the sound. Stevie Wonder’s “Living for the City” has plenty of mid to high-end, and listening to it with the Latitude headphones didn’t seem any different than listening with a pair of similarly priced wired earbuds. I have to say, I was a little impressed, but not blown away. The lows really weren’t there, and the EQ modes didn’t help at all.

That being said, at sufficient volume there’s enough bass to enjoy Jidenna’s “Hail to the Chief” during your workout without wishing you were sweating into more expensive earbuds. And they’re comfortable enough, at only 13 grams, to wear for hours at a time at work or while studying.

I’m a bigger fan of over-the-ear cans though so I was a little more excited to check out AUKEY’s EP-B52 headphones.

Consider me a fan of the design style. The hints of chrome are beautiful, and the faux-leather padding is sufficient enough to provide the same level of comfort you’d expect from slightly more expensive headphones.

This really is an appealing product and, while I’d like to see them in bright colors, the matte black and shiny metal contrast nicely.

My love affair with them doesn’t end with the sound, but loses some of its intensity. The EP-B52 cans have 40mm drivers, weigh 10 oz, and feature an 18 hour playback time on a single charge. They cost twice as much as the in-ear EP-B40 does, but they don’t sound twice as good.

However they do sound better – you’ll get richer lows at almost any volume by virtue of the larger drivers. These cans are foldable, and wireless, which makes them portable – but you won’t want to run with them for fear they’ll fall off your head.

Where they gain back some points is in the comfort level. Cushioned ear pieces help make them seem lighter than they really are. I’d highly suggest them for commuters, especially if you’ve ever left your more expensive cans on the subway. You’ll miss these if you do, but you won’t spend a quarter of your paycheck replacing them.

Neither one are the best headphones I’ve ever used, but I’d still recommend them to anyone on a budget. If you’re looking for something inexpensive, wireless, and comfortable they are both fair options at their respective price points.