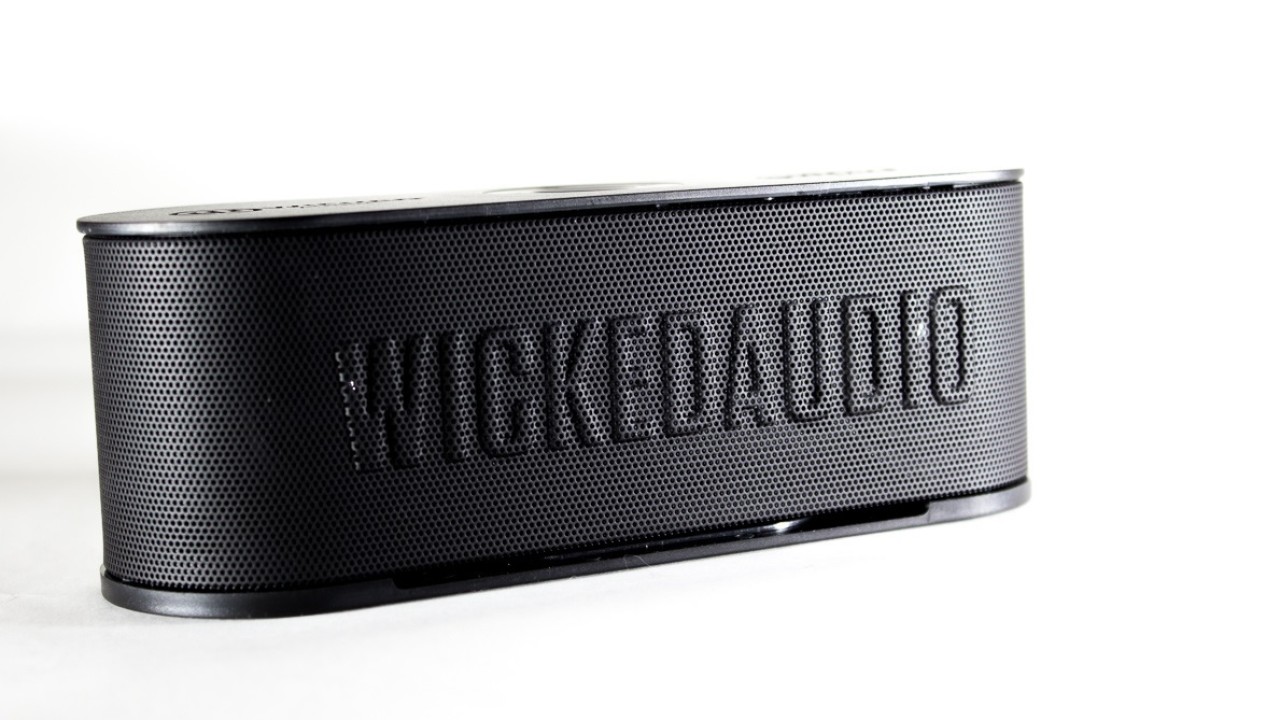 I tested out Wicked Audio’s Outcry Extreme Bluetooth speaker just in time for Halloween, and it’s been great to party with.

I used it in a number of environments and found a lot to like. It’s a quality speaker that literally growls and barks (more on this later), plus it sounds pretty good thanks to two 45mm drivers.

The Outcry Extreme is a sturdy dual-speaker that lives at the low-end of high quality. I give it top marks for manufacturing and durability. It’s over half a kilo (1.5 lbs) of plastic and metal sturdy enough to suffer some drops.

In the looks department, the Outcry Extreme had me at hello: its packaging was tailor-made to appeal to my inner geek. Once ripped from the box I was impressed with its squat stature and cool-as-jazz use of black on black embossed letters.

Glancing at the spec sheet had me concerned, it has a 4-5 hour charge time and a lithium ion battery that only lasts 7-8 hours. This isn’t very impressive, but I will at least point out it can be used while charging.

The two 3-watt, 45mm drivers aren’t going to fool anyone into thinking you’ve got a Sonos speaker hidden somewhere, but they don’t sound like “computer speakers” and they’re a very solid upgrade over streaming music through my phone or an Amazon Echo Dot.

I used the speaker in my living room for a couple weeks as my “morning music” player and found it has just enough low and mid range sound to provide excellent background music for morning conversations over coffee. It’s got simple buttons on top for playing, pausing, and volume — and the back features a 3.5mm jack, a micro-usb slot for the charging cable, and an on/off switch.

When I took it to bed it made a nice lullaby player to help put the baby asleep, I was grateful it lacked the tinny sound my smartphone’s speaker had. But for situations like this I found it was best that I got up and turned the speaker off by hand before I fell asleep, lest it lose it’s Bluetooth connection and get mad.

It’s designed to be “expressive,” meaning it makes noises to indicate status. When it loses Bluetooth connection it lets out a “grr,” and when it connects back it says “Ding!” in a goofy-but-happy voice. Both of these woke up my baby. In Wicked’s defense it isn’t called the “Outcry Sweet and Mild,” it’s the Outcry Extreme, and it’s more of a party animal than a bedside companion.

Despite the speaker waking up my baby, I still love those little noises. And they were quite the conversation starter when I took it to an actual party.

It doesn’t take much to fill my home with sound, so we threw a party outside at our local park and took the Outcry Extreme with us. It’s a no-muss-no-fuss speaker, I never had the slightest of problems connecting to it. Even better, it never dropped its connection unless I moved beyond 10m (32ft), with my phone in my pocket – which was as advertised.

The sound quality was just fine at the park and we kept it at about half-volume while we ate, talked, and listened to oldies and Motown classics. It got knocked off a picnic table at least three times, and never stopped playing. In fact there isn’t a scuff on it, much to my surprise.

I only had one problem with the Outcry Extreme: it doesn’t shut itself off if you disconnect Bluetooth and leave it inactive. This isn’t a deal-breaker, but I’d prefer it shut off after an hour or so.

The Wicked Outcry Extreme isn’t going to shake your floors or rattle your windows, but for less than $60 dollars it’s a fair offering that won’t cause you financial ruin if it gets lost or nabbed at a party.

It’s available at the Wicked Audio website for $54.99 here.