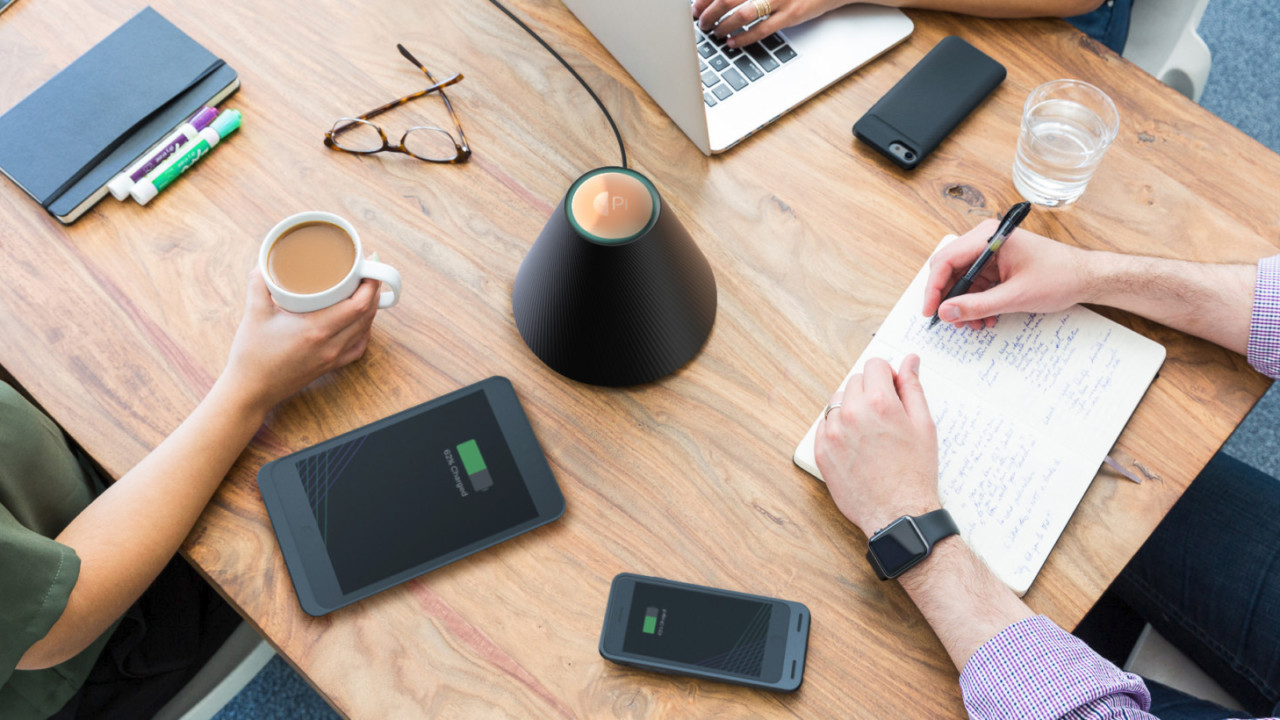 While there have been numerous attempts to enable wireless charging in mobile devices, the closest we’ve come to a market-ready solution is Qi charging, which still requires you to either have a specially designed phone or case, as well as a pad on which to place your handset.

Now, Pi, a new startup founded by MIT alumni, has demonstrated a desktop charger that can power up your gadgets up to a foot away in any direction, without requiring any physical contact.

Sure, your phones and tablets will require custom cases or support for resonant induction like the new iPhones have – but unlike charging pads, Pi’s solution lets you continue to use your phone in your hand as you normally would, and lets you charge multiple devices simultaneously – so you’re not restricted by the size of the pad.

To achieve this, the company has developed a beam-forming algorithm to direct a magnetic field to your device, no matter how it’s oriented in relation to the Pi Charger.

The team at Pi explained that they planned to approach consumers with a charging device that will cost ‘well below $200’, and also partner with hardware manufacturers to integrate their technology into their products. They also have plans to introduce a larger version of the Charger for conference tables later on.

But what about laptops? Pi noted on stage at TechCrunch Disrupt that it could happen at some point; the founders said that they could theoretically increase the power output of their Charger to suit laptops by incorporating components with higher power ratings into their charger. They also pointed to Dell’s $1,750 Latitude 7285, which can be juiced up with a wireless charging base as an example of a machine. To sum up, it’s possible, but it’ll take some time for hardware makers to embrace the concept and ready their products for this technology.

If Pi can truly deliver on its promise, it’ll mark a major advancement in charging technology that could eventually change the way we use our devices. For example, if you don’t need to plug in your phone as often to keep it powered, there’s nothing stopping manufacturers from combining more powerful hardware with 4K displays for graphics-intensive experiences.

It’ll be interesting to keep an eye on Pi as it inches closer to bringing its Charger to the market. The company has raised $3.5 million in funding and is allowing people to reserve a Charger by signing up on its website, though it hasn’t said when it’ll begin shipping. Plus, with other firms like Disney also keen on cracking the wireless charging puzzle, this race to power your devices from afar will certainly be worth following.