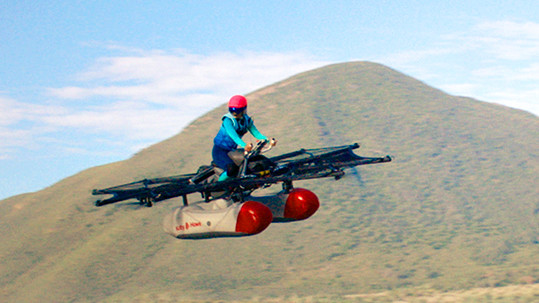 The future of flying cars has never looked so real. Silicon Valley startup Kitty Hawk, backed by Alphabet CEO and Google co-founder Larry Page, has finally launched today – and it promises its electric flying cars will be available to the masses by the end of the year.

The company will be led by former X chief and Google self-driving car originator Sebastian Thrun, who earlier today took to Twitter to unveil Kitty Hawk for the first time.

The tweet in question teased a prototype of the company’s upcoming Flyer electric aircraft, along with a link to Kitty Hawk’s website and the ambitious promise to change “the future of personal transportation.”

Changing the future of personal transportation. Join us @kittyhawkcorp to get information about #theFlyer prototype https://t.co/mbX5Z0WpTo

You can catch a peek at Kitty Hawk’s futuristic single-rider Flyer in action in the video below.

The footage was reportedly recorded at a lake nearby San Francisco during one of the company’s trial sessions, according to the New York Times.

The NY Times further says the open-seated vehicle weighs approximately 220 pounds and packs eight battery-powered propellers (as loud as a speedboat) to soar into the air.

Interestingly, the publication adds that – thanks to its lightweight design – customers will be able to fly the aircraft without the need for any special licenses under current Federal Aviation Administration regulations. But this only applies to sparsely populated areas.

Despite Kitty Hawk’s goal to push the flying vehicle to market by the end of the year, pre-orders are still closed as of now. You can, however, pay a one-off fee of $100 to subscribe to Kitty Hawk as a ‘Flyer Discovery Member.’

In addition to early access to updates and upcoming demonstrations about the aircraft, the membership will also entitle you to ‘priority placement’ as well as a $2,000 discount once the Flyer actually launches.

While the price is yet to be determined, you can head to Kitty Hawk’s website here for more details about the airborne single-rider.