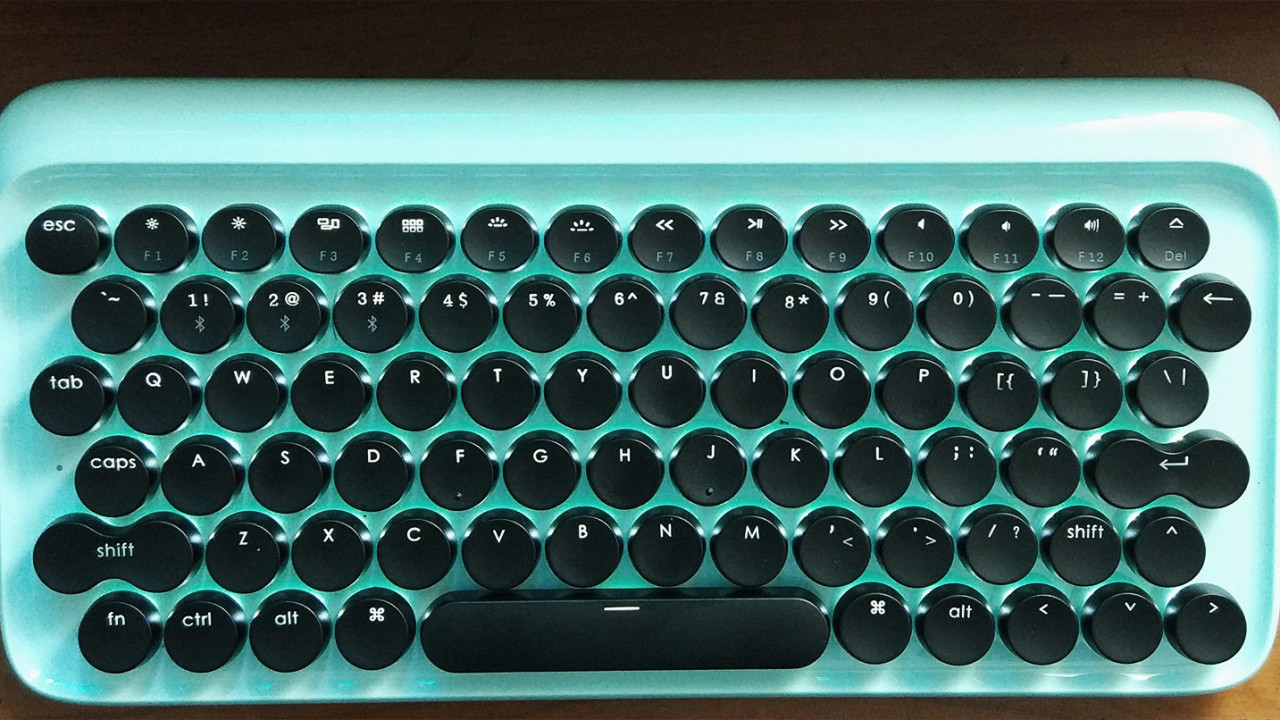 I’ve written before about the joys of using mechanical keyboards: They offer a more exact response when you hit keys, help reduce typing errors and just feel great.

But if you don’t want your keyboard to take up plenty of room, there aren’t a lot of options just yet. That’s why I was glad to get a chance to try out the Lofree Dot, a compact and beautifully designed keyboard from an upcoming gadget maker in China, that marries the feel of robust mechanical switches with the convenience of wireless connectivity.

The Dot has a small footprint, roughly the size of an Apple Magic keyboard, with hard non-adjustable rubber pegs and keys that mimic the look of traditional typewriters like the Remington 12 from the 1920s. They complement the smooth curves of the tray perfectly, making for an elegant and timeless design that will go with just about any desktop setup.

There are discreet switches on the side to turn Bluetooth on and off, as well as to toggle between modes to support Android/PC and macOS/iOS. Overall, the Dot feels sturdy and well built, albeit a bit heavy for its size – but that’s due in part to the built-in rechargeable battery, which can keep it going for several days on a single charge.

I love that the Dot doesn’t require any setup at all – simply pair it once with your desktop or mobile device and you’re up and running, keyboard shortcuts and all.

You can use the Function key for things like volume and media playback control, system sleep mode and the Windows Start button. In addition, you can toggle between multiple levels of backlight strength – a nice touch.

Typing on the Dot

The Dot features Gateron Blue switches, which are clicky and offer a fair bit of resistance and travel. That basically means that they’re loud and need a solid stroke to engage each key. And because of the way the keycaps dip in the middle, your fingers need to strike from above; gliding across keys the way you might on a laptop’s chiclet keyboard simply isn’t an option here.

That doesn’t mean that the typing experience on the Dot isn’t pleasant. It actually feels great beneath your fingers, and you’ll find yourself making less mistakes as you get comfortable with it. However, it’ll take a couple of weeks of getting used to before you’re as quick with it as you were on your previous favorite keyboard.

But that’s just for everyday use: If you work extensively with documents or play fast-paced games like I do, you might not enjoy the Dot as much as a standard mechanical keyboard. It’s missing essential keys like Home, End and Page Up/Down, so navigating around a lengthy document or web page might slow you down; I also found it a bit difficult to move around as a ninja space robot in Warframe because the rounded keys aren’t conducive to being mashed as easily as the ones on my other old-school keyboard.

If you’re looking for an elegant desktop accessory to class up your workspace, you’d be hard-pressed to find something more distinctive than the Dot. The gorgeous profile of the body and keys, coupled with the pleasing color schemes on offer, make it a must-have for design enthusiasts. At $99, the look, feel and overall quality certainly warrant the asking price.

Add to the fact that it’s a delight to type on, and that it doesn’t require you to replace its batteries and works with your phone or tablet, and you’ve got a winner on your hands. Oh, and its built-in Bluetooth means that it’ll work great with the HTPC in your living room too.

That being said, this may not be the best choice for gamers or people who rely extensively on the full array of keys offered on traditional mechanical keyboards – so keep that in mind while ordering it for yourself or as a gift.

Check out the Lofree Dot Wireless Mechanical Keyboard’s Indiegogo campaign on this page, where you can order it in three different colorways for $74 with free US shipping. It’ll ship in May, and will be subsequently become available via Amazon.