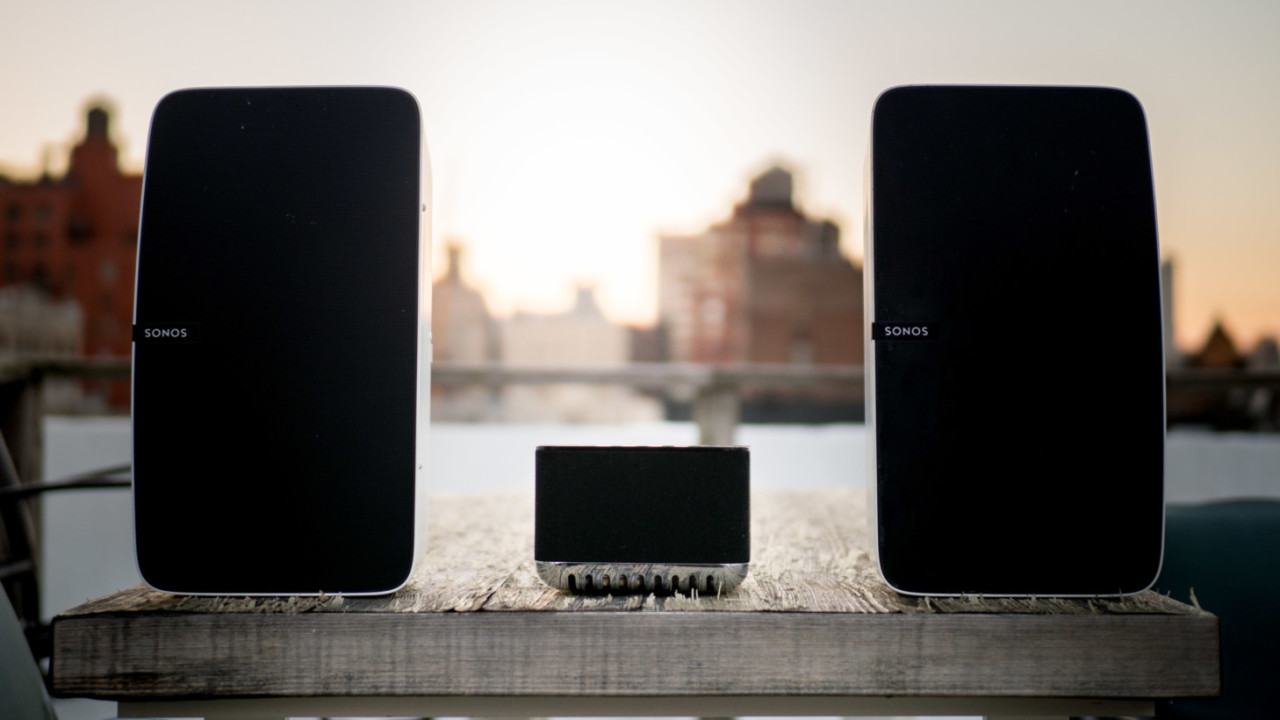 It’s pretty hard to find bad audio gear these days, but by the same token, it’s rare to find something that truly stands out from the sea of competition. Mass Fidelity’s Core, a small Bluetooth speaker that can create ‘acoustic holograms,’ is one of the exceptions.

At a basic level, the Core is a Bluetooth speaker with some multi-room connectivity, but that description is a poor representation of its quality and versatility.

Starting as an Indiegogo campaign, the speaker uses a technique known as ‘Acoustic Holography’ to imitate – and in some ways, surpass – the stereo imaging of a dual-speaker set up. Yeah, it sounds like the buzziest of buzz words, but it’s also the most apt illustration of the experience of listening to the speaker.

More specifically, the technique is called wave field synthesis. A series of drivers housed inside the speaker and some clever algorithms work together to bounce sound off walls to create a realistic soundstage, as well as maximizing the sound quality. You’re actually not supposed to pair two of the speakers in the same room, because the reflecting sound waves will negatively interfere.

But it’s not the same as the trick your average TV soundbar tries to do. Aside from flat out sounding more realistic than any soundbar I’ve ever heard, the Core also isn’t shackled by the same ‘sweet spot’ requirements of most sound systems.

That’s perhaps the coolest bit about wave field synthesis. Where most speakers require you to sit right at the center of your setup to get decent spatial positioning, the Core is more like “nah, don’t worry about it.” As someone who is picky about always getting the center seat more for audio than video (whether in movie theaters or my living room), it’s a welcome relief.

I was able to move all around my bedroom with nary an effect on the stereo separation. When listening to Pink Floyd’s Money (a track recommended by Mass Fidelity because of it’s psychedelic stereo mixing), it sounded like there was a real band playing in front of me. Only when I moved to the extreme left, right, or front of the room did the imaging significantly deteriorate.

Conversely, I did notice the Core is a little more picky about the room itself than a standard 2.0 setup. Where stereo speakers generally have a direct path to your ears, the Core partly relies on wall reflections for the best imaging.

It does maintain some stereo effect even with no walls, but works best when it’s equidistant to a room’s left and right borders, with no objects in between. That is the case for normal speakers as well, and chances are you’d place the speaker in the middle of the room anyway, but it’s something you’ll want to be wary of to get the best sound.

My current audio set up consists of a stereo pair of Sonos Play:5, which cost $500 a piece. The single Core unit comes remarkably close to their performance.

I’ve already mentioned the holographic imaging. In at least this respect, I think the Core is actually better than the pair of Sonos. The soundstage feels more substantial, like it’s coming from invisible physical objects.

This is aided by the visual illusion; while sounds are clearly emerging of the left and right channels on the Sonos – or, you know, any normal pair of speakers – on the Core it seems like they are manifesting out of thin air.

On the other hand, the Core also manages to impress with clear dialogue during movies, something I have more trouble with the Sonos. In fact, the Core almost sounds like you’re working with three speakers, rather than one.

Of course, sound is more than just soundstage, and an individual Play:5 still has an edge, with a bit more sparkle with the highs and noticeably superior bass presence.

That’s not because the Core is bad – in fact, it’s really darn good for a speaker its size, rated down to 44 hz and pumping out tangible bass with grace and power. It’s somehow almost as good as the massive 80-pound Fluance Fi70 I reviewed in December.

But the Sonos are even better, handling sub-bass frequencies down to 25-30 hz or so with serious impact and minimal distortion.

These differences are further accentuated when the Play:5 are paired, and its TruePlay audio tuning feature can be a real godsend when your room has poor acoustics. The Core also loses some of its holographic chops at lower volumes.

What you think sounds better will depend on what you’re looking for in your audio set up. As a sucker for good imaging, Core has overtaken the Play:5 as my TV set up of choice.

It’s also worth noting you can add a $300 wireless sub to the Core, which fills out the lowest sub-bass frequencies an frees the main unit for better reproduction of the higher frequencies. You can also just plug in your own sub too.

Massive sound you can fit in a backpack

It deserves to be reiterated. The Core is tiny for the sound it puts out, and is offers a level of convenience I haven’t seen from anything with its sound quality.

That means you can easily take it with you on a picnic or parties, and listen to music without it sounding like it’s coming from a tin can. I didn’t try to drain the battery, but Mass Fidelity rates it at up twelve hours, and I was never able to drain the battery in several hours of wireless listening.

Adding to its portability chops, it brings a USB port for charging your devices on the go, and can pair your phone via NFC by simply tapping it on the top – a nice touch.

You might argue that you can get better sound quality for cheaper with a pair of decent speakers and a good amp. Sure, I can’t test every speaker out there, so that’s probably true. $500 can buy you some pretty good audio, and the Core’s dependency on room shape should might give you some pause.

But even then, I don’t know where else you’re going to find the combination of quality, soundstage, and diminutive size the Core offers at any price tag. It’s a Bluetooth speaker, it’s a multi-room system, it’s a replacement for a soundbar, it’s a high-fi experience, and it can all fit on your hand.

The Core isn’t going to replace the very best audio systems, but if that kind of versatility appeals to you, there’s pretty much nothing else like it.

The Mass Fidelity Core is available from Amazon for $499.