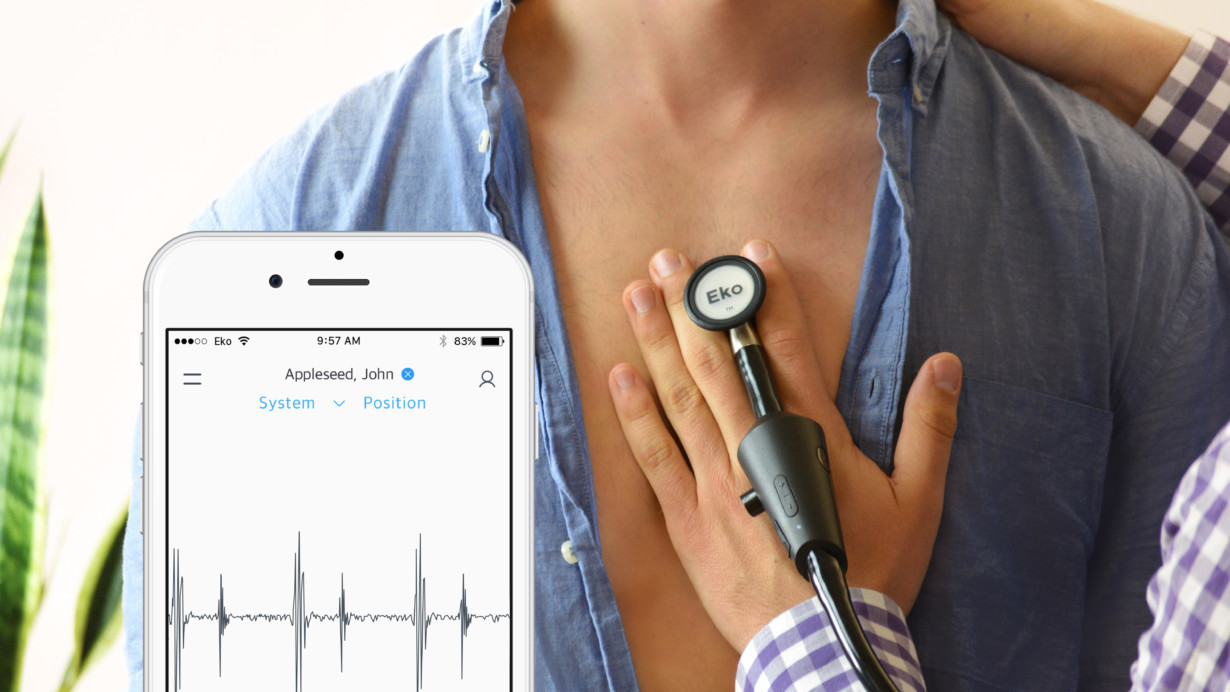 Go to any hospital or urgent care center, and draped around the neck of every doctor will be a stethoscope. These devices, used by physicians to listen to the heart and the lungs, were first invented 200 years ago by Frenchman Rene Laennec, and the fundamentals of them haven’t really changed all that much ever since. They’re stuck in the analog ages.

“For the vast majority of clinicians, differentiating between normal and pathologic heart sounds is a major challenge. As many as 80% of internal medicine residents misdiagnose common murmurs with their stethoscope,” he explained.

This shortcoming lead Bellet to imagine how the humble stethescope could be dragged into the 21st century. “We had an idea to build a ‘smart stethoscope’ that would assist clinicians in the decision process.”

From here, the idea for Eko was born. This $300 stethoscope amplifies heart and lung sounds forty-fold, and can make recordings, making it easier for doctors to collaborate. It also includes both a digital and analog mode, allowing doctors to switch between the two as required.

“We set out to build a digital stethoscope that not only amplified sounds (there had been a few out there that did that), but actually make it possible for clinicians to securely record, save, annotate, and share sounds with experts for a second opinion,” Bellet explained.

Once a recording is made, it can be shared with a paired smartphone running iOS or Android, and uploaded to a secure cloud platform.

“All patient info, whether recorded by the device or entered into the app is encrypted and stored in Eko’s secure Amazon AWS cloud database.”

So far, there are 3,200 clinicians using Eko to record patient’s heartbeats and lung sounds across an impressive 400 institutions.

It’s used in departments as diverse as pediatrics, cardiology, pulmonology, and chronic-disease management, and the device has been certified by the FDA (Food and Drug Administration) and Health Canada, and plans to expand into the European Union in 2017.

“It took us eighteen months to get our class 2 device certification from the FDA,” Bellet explained.

“Now that we’ve got the digital stethoscope and software platform cleared, we’re now working on software that’ll let us diagnose conditions using machine learning.” he said. “Think of it as being like ‘Shazam for Heartbeats'”

“The vision is to be able to characterize for the clinician what it is they’re listening to to take much of the uncertainty out of the equation. Essentially, it would be putting a the ears of a cardiologist in the stethoscope of any clinician.”

I wanted to know how this would work in the real world. Bellet gave the example of a nurse who is listening to a patient, hears a murmur, but is unsure of whether it’s pathologic. He or she could run it against the algorithm and learn that it’s a mid-systolic murmur indicative of aortic stenosis, and is thus pathologic and requires a referral.

He was keen to emphasis that this, despite incredibly cool, is no replacement for the real thing.

“This will be classified as ‘decision support’ and not diagnostic given it still relies on the clinician’s expertise. But the goal is that it improves their sensitivity and specificity for catching and distinguishing difficult heart sounds at the point of care”

Eko Devices plans to roll out its first algorithm to the Eko platform in early 2018. “We’ve built the foundation of our algorithm development and are in the process of expanding our annotated dataset. We’ll then go into a clinical validation phase before submitting to the FDA and CE.”

But don’t expect it any time soon. Validation and approval is a long and arduous process.