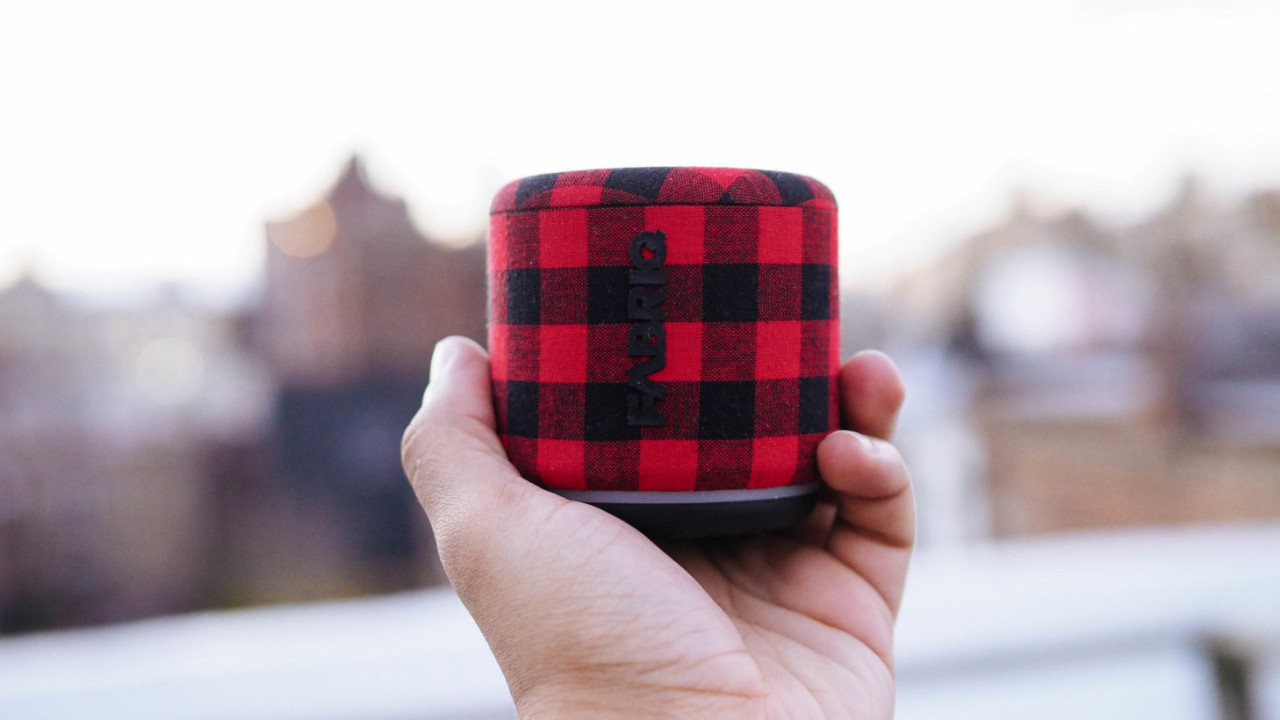 We’ve seen voice assistants integrated into small household speakers the likes of Google Home and Amazon Echo, but what about the more common, portable Bluetooth speaker variety? That’s what the market the Alexa-powered Fabriq speaker aims to address.

It’s a cute little speaker, and I’m particularly for of the red ‘Jack Plaid’ of my review unit (there’s a motley blue ‘Splat’ and a an ‘Earl Gray’ option too). The bulk of the speaker is covered by these fabrics, adding a touch of style to what could’ve been an ordinary cylindrical design. It feels well built, and it won’t shout “I’m technology!” next to your décor. That said, there is an Echo-like light ring towards the bottom of the device, which can cycle through a few colors, pulse along with your music, or be turned off altogether.

Setting it up is easy. Download the Fabriq app for iOS or Android, press a button on the device, and go through a few steps in the app. It took all of two minutes. Bluetooth pairing is the same as any other Bluetooth speaker, you’ll just have to tap the connectivity button to switch from Wi-Fi to Bluetooth mode.

The device’s wireless connectivity is like Amazon and Sonos’ secret baby. Unlike any of Amazon’s products, you can connect multiple Fabriqs in either a multi-room arrangement or stereo set-up for improved quality (I only had one unit, so I didn’t get to try this out, but it seems like a no-brainer). Unlike Sonos, it has voice control and bluetooth connectivity (although voice only works over Wi-Fi).

It sounds quite good too. It has a solid amount of mid-bass, which generally doesn’t muddy up the higher frequencies, handling some difficult passages with surprising grace. But like almost every speaker its size, it can’t reach the lowest of the lows; that’s to be expected.

Treble is clear with ample detail and the midrange shines through with clear vocals. It does sometime clip a little bit at the highest volumes and I wish there were an in-app EQ, but it’s ultimately very competitive with other portable speakers in the $50 range.

Of course, the speaker’s selling point is Alexa integration, and it works about as well as you’d expect. Responses are sometimes take a second or two more than my Echo Dot, but otherwise it detects my voice well and understands my commands with similar accuracy.

Unfortunately, the speaker is really more of a competitor to the Echo Tap than the Echo Dot – meaning, you have to tap on the speaker every time you want to speak a voice command.

As such, my feelings about the Fabriq echo my thoughts on the Tap. Having to walk over to the speaker and tap on the button everytime you want to ask it something seems to defeat much of the convenience of using a voice assistant.

I can understand turning off the feature when unplugged to conserve battery life, but in an ideal world, it would be left on while the speaker is plugged into the wall to behave like an Echo Dot. I imagine the small speaker probably doesn’t have the necessary far field microphones; it doesn’t need them if you’re close enough to tap a button.

That’s not to say I don’t appreciate the inclusion of Alexa, anyway – a voice assistant of any kind is something almost no portable speakers can claim. If I’m busy interacting with friends, it’s nice to be able to tap a button instead of pulling out my phone. You could theoretically also use it to hail an Uber, order a pizza, or any of a myriad other Alexa integrations. But again, this will only work over WiFi.

If you’re looking for a Bluetooth speaker around $50, then the Fabriq is certainly worth of your attention; it performs well for its price tag on sound alone, and the styling and voice assistant features are a nice bonus. Just don’t expect it to replace an Echo Dot or Google Home.