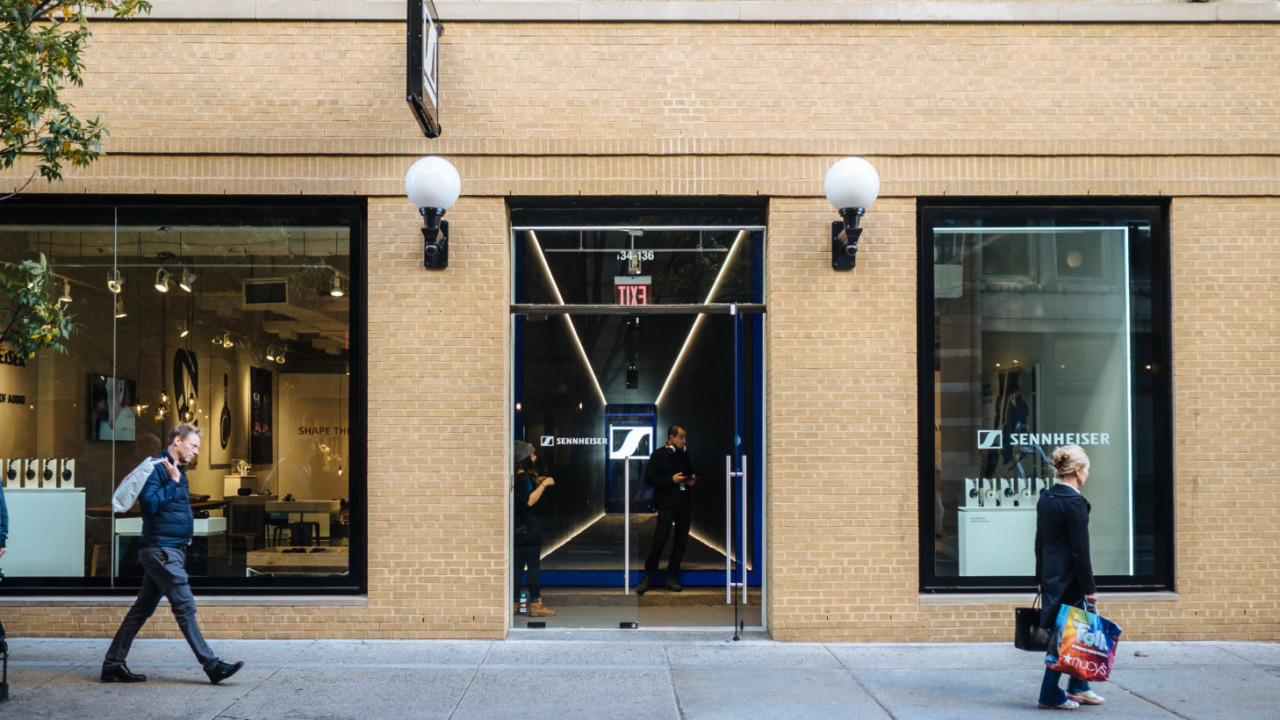 What do $55,000 headphones sound like? If you live in New York City, all it takes to find out is a quick visit to Sennheiser’s new pop up store. It’s something of a small audiophile haven.

New York has fairly few places to try out new headphones despite the city’s enormity. Camera and electronics store B&H is perhaps the most notable. J&R used to be another haunt for headphone shoppers, before it closed down. The Sennheiser pop up helps fill in some of that gap, although only for its singular brand.

Thankfully, that just happens to be one of the best headphone brands in the world. The highlight of the experience to anybody who follows high end headphones at all is obviously the Orpheus HE-1, the 50-grand headphone-and-amplifier set up unveiled last year that represents the absolute pinnacle of headphone technology – but more on this later.

The store has a simple set-up with most of its consumer headphones on the left side, and some business-oriented items (conference headsets and microphones) on the right.

Naturally, the left is where most of the fun is. You can play around with various models, including the popular Sennheiser Momentum and Momentum 2.0, as well as the travel-friendly PXC 550 (which I’m currently reviewing and are spectcular, by the way).

The store has a casual vibe to it, and there was some Luther Vandross playing in the background when I walked in. Great music choice, but I wish it were quieter

I get the need to provide ambiance, but I suspect many of the people who visit the store in the first place will want to get the purest possible listening experience. Thankfully the Orpheus’ are kept in a separate acoustically sealed room, but it would be nice if you could try out some of the other headphones in a silent environment as well.

But maybe I’m just being picky; it’s still better than the cacophony of most headphone stores. I tested the open back HD 800 and HD 800S, Sennheiser’s flagship headphones within the more reasonable cheaper-than-your-car price range, along with the company’s HDVD 800 solid-state DAC and amplifier.

I linked my LGV20 to the amp with a provided 3.5mm cable, and swooned a little. The employees seemed cool with me connecting my own headphone to the amp as well.

Okay, so that Orpheus HE-1. Though there’s a model with gold accents encased in a glass display in the store’s main section, you can’t just walk in and try them out. You’ll have to talk to a representative to set up a half hour appointment. There were slots available for the next day when I visited, though I imagine imagine these will start filling up.

I was taken to an acoustically sealed room at the back of the store, and suddenly the sultry R&B in the main section of the store was drowned out. That’s how I knew Sennheiser meant serious business. The company also has a store in the World Trade Center, but doesn’t let you try out the HE-1 there because there wasn’t room for a quieter listening experience, and it wasn’t willing to compromise on the experience.

And there they were – possibly the world’s most expensive headphones, just waiting for my unworthy self to try them out. The control points are hidden in a marble frame when not in use. One click on the volume knob, and the controls, the vacuum tubes, and the glass cover pop out to begin your listening experience. It’s a slow, deliberate process, meant to build up anticipation.

I wanted to play something from my phone, but they couldn’t find a 3.5mm cable or USB-C adapter in time, so I put on the headphones, and played ‘Hotel California’ from one of the demo CDs.

It’s hard to put into words what listening to $55,000 headphones is really like. Perhaps the best I can muster is that I may have been listening to the Eagles, but the music experience was audio nirvana.

Keep in mind the HE-1 are meant to be the best headphones in the world; they’re not trying to sound like speakers. As such, they’re not going to make you feel like the sound is coming from in front of your or provide a surround experience. Instead, it simply feels like a perfect execution of the traditional headphone concept.

The sound is exhilerating, but the HE-1 themselves seem to be bored, begging for a better source to really put them to the test. I wish I’d had the chance to test out binaural recordings for a more immersive experience – the listening room is also meant to demo Sennheiser’s AMBEO 3D audio tech – but I didn’t get the chance in my brief time with the headphones.

But I’ll surely be back. The store is planned to stay open until February, but here’s to hoping it sticks around for much longer. Given there are few places to really just relax and experience music on your own terms in NYC – Sonos’ new store is one of the few others – Sennheiser’s pop-up is a welcome respite from the racket of one of the worlds busies cities.