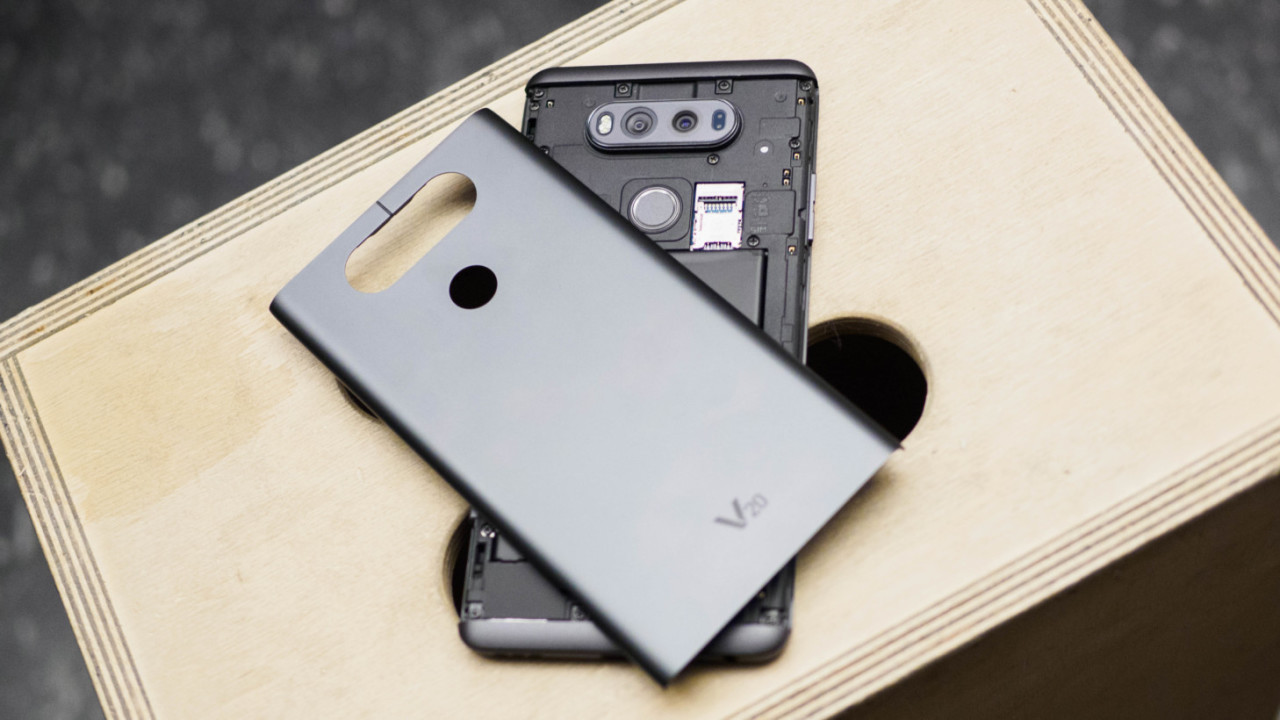 LG is today unveiling its latest flagship, the V20, with the hope it will remove some of the sour taste left by the G5 from earlier this year.

It’s a powerful 5.7-inch device that – like the previous V10 – is packed to the brim with features aimed specifically at mobile videographers and media power-users, but with a safer design.

First things first; no, it’s not modular, but it’s also not a completely fixed unibody construction either. Instead, LG decided to meet its users halfway and simply make the metal back plate removable.

What appeared to be a button to detach modules in the leaks is instead simply a button to remove the back plate; press the button and it pops right out. It’s easy, it works, and quite frankly I’m surprised we haven’t seen something like this from other flagship devices before.

That does mean that you won’t see detachable modules like the G5’s camera or audio add-ons, but the G5’s most useful feature was the clumsy replaceable battery anyway. The V20 lets you replace the battery and access the microSD card slot like any other plastic phone. I’ve come to prefer Motorola’s battery pack modules to replaceable batteries, but this is a close second.

The overall design is agreeable, if a bit safe. After getting used to Samsung’s Galaxy Note 7, every other device with a 5.7-inch screen feels positively huge, but narrower bezels and metal construction do allow the phone to be noticeably smaller than last year’s V10. Also, the V20 does technically have a second screen, which makes it more akin to a 5.9-inch phone.

It feels good in hand, but I have to admit I miss the V10’s rubber and metal design combo. It was divisive, but at least it looked like no other smartphone; the V20 looks just like any other big metal handset. 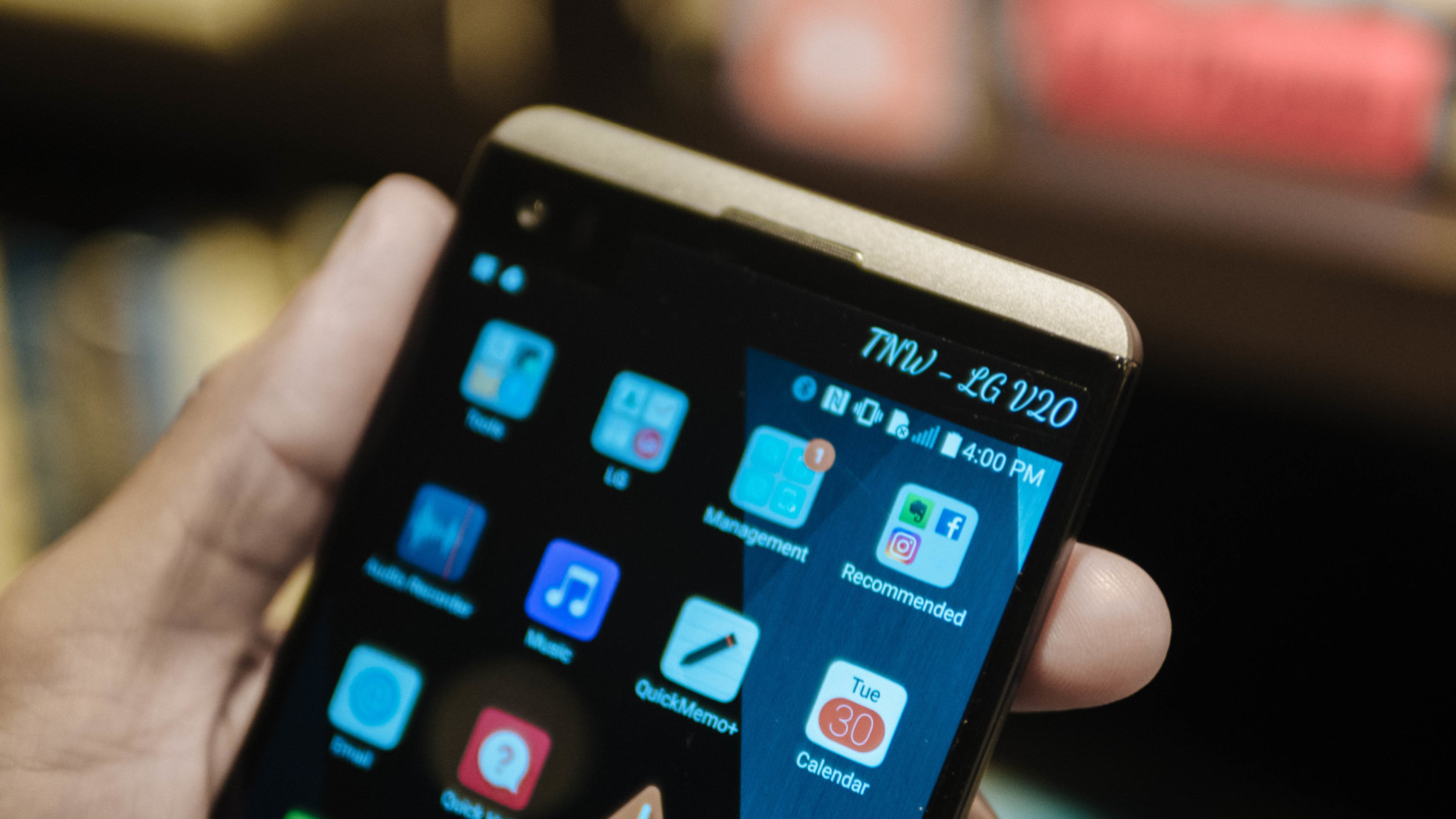 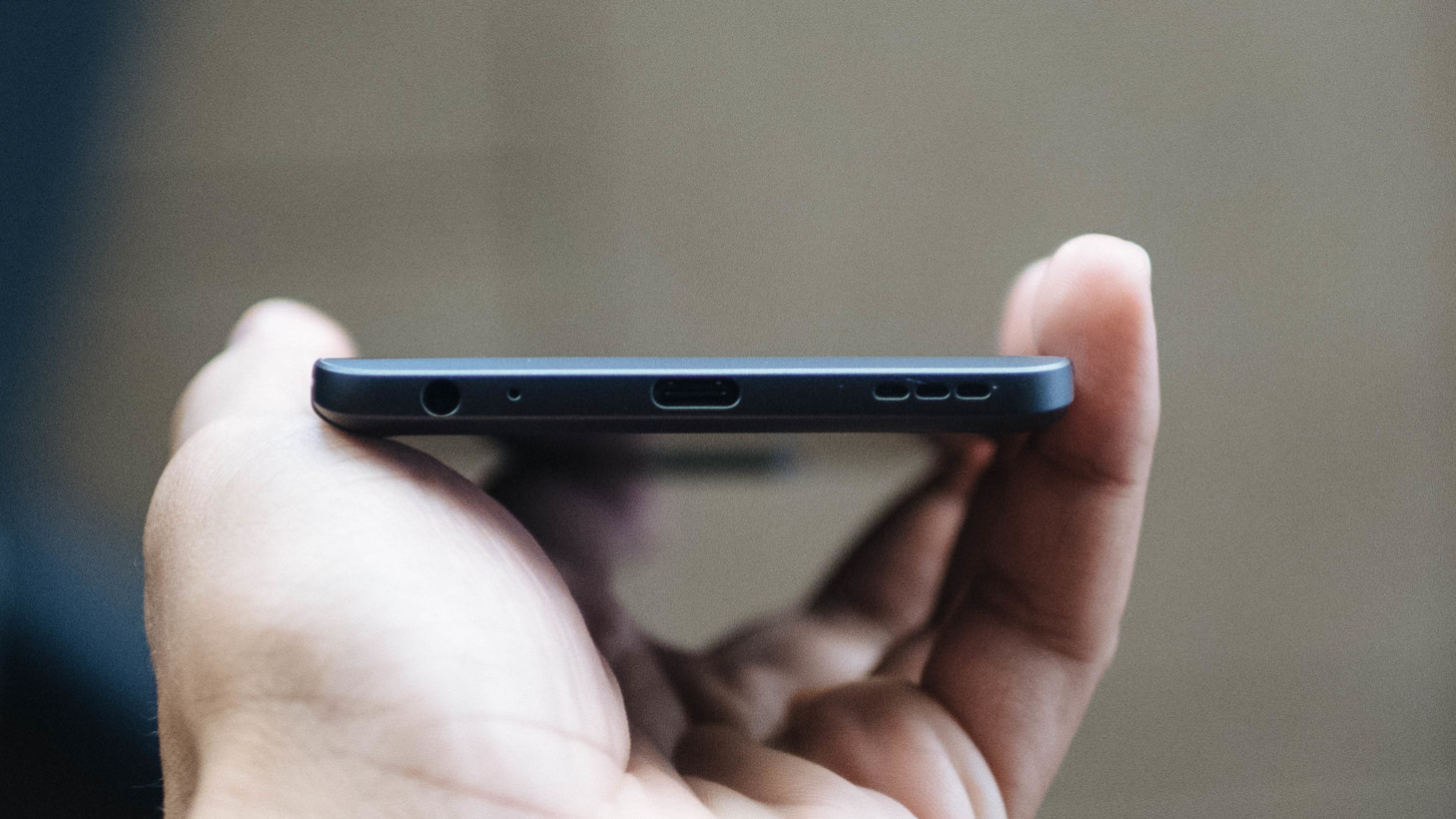 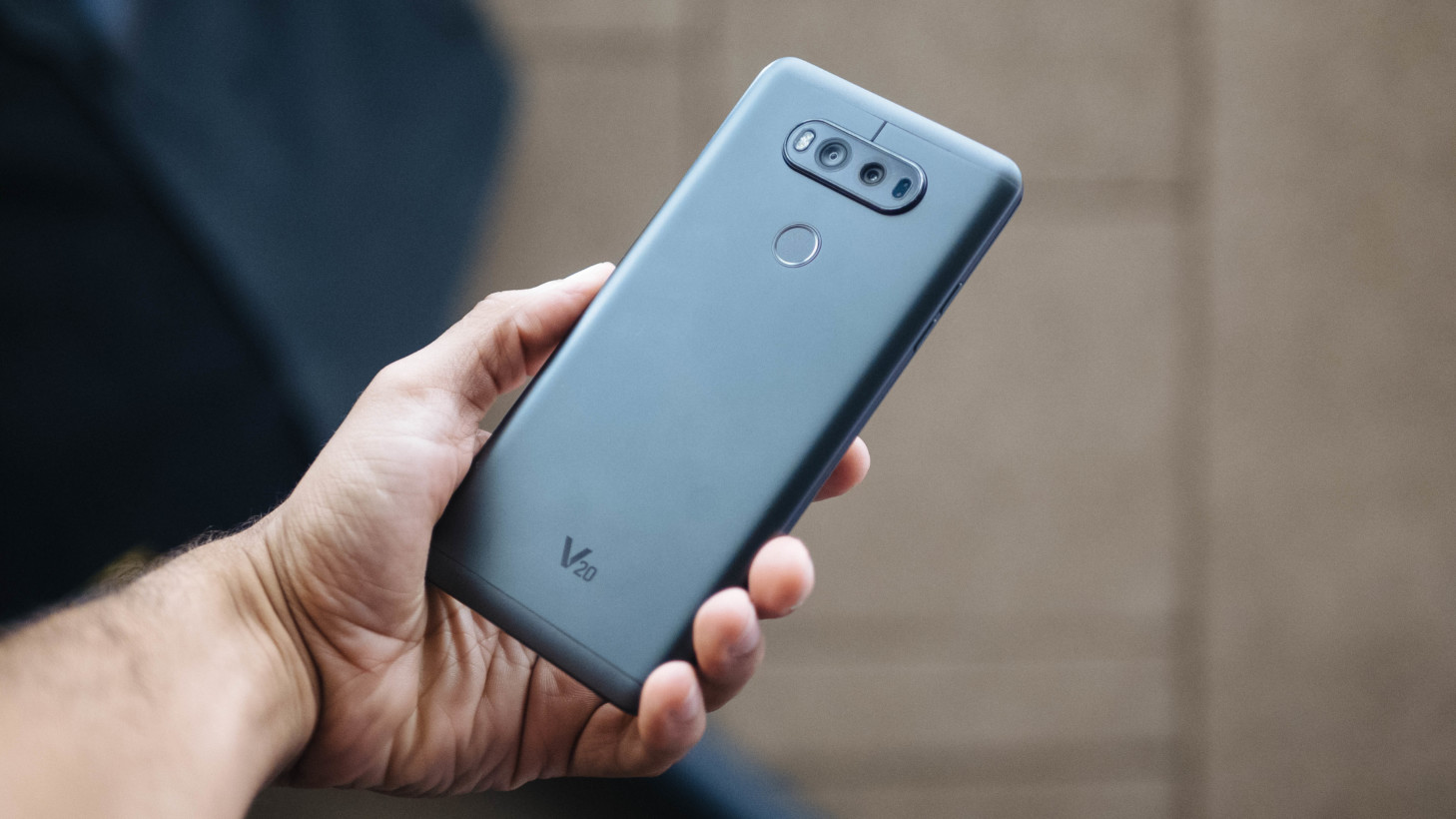 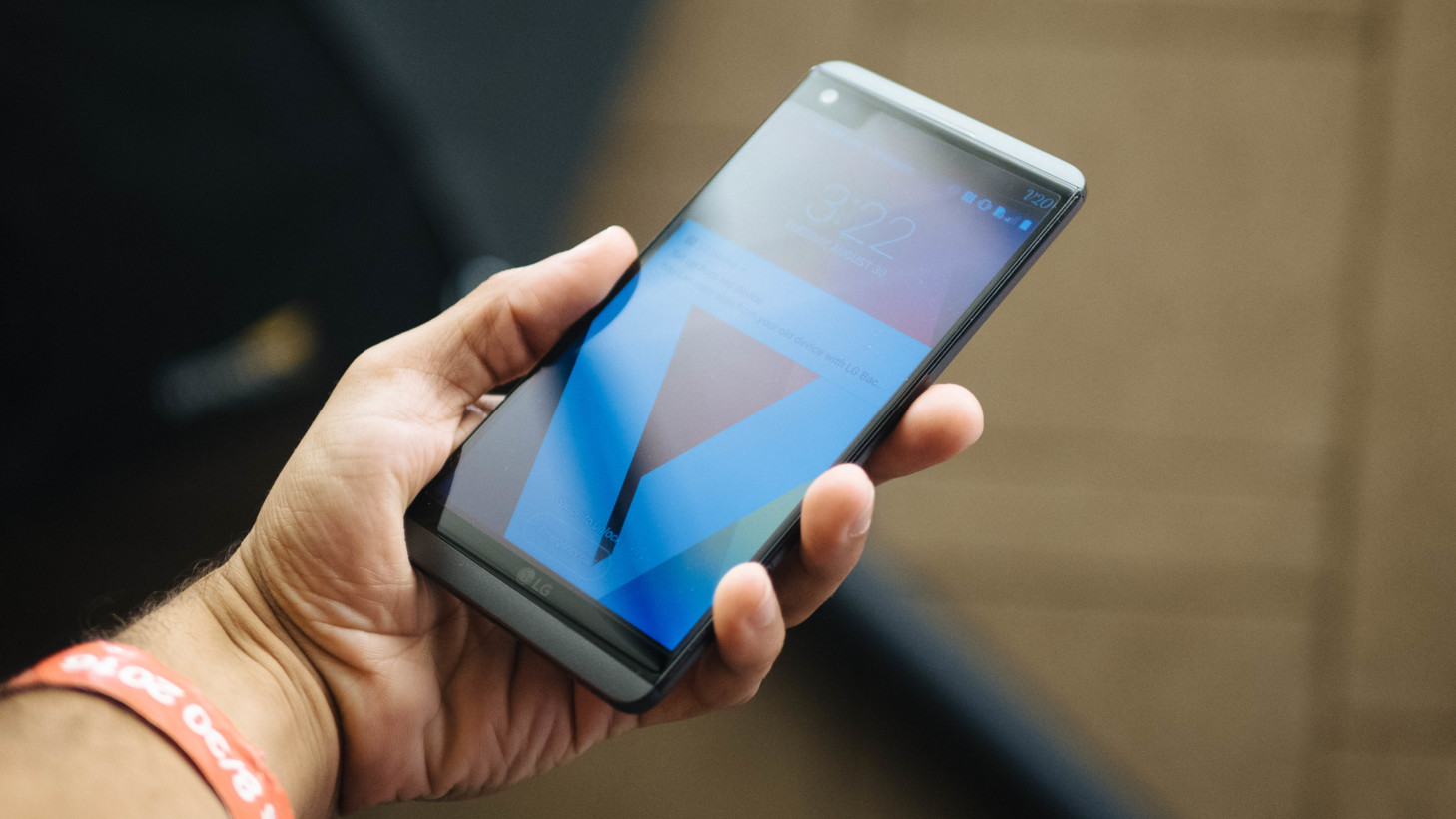 At least you can actually tell it’s metal this time around. Unlike the G5 – which some people doubted was a full metal body – the V20 has an unmistakable heft to it.

Moving onto the specs, most of the the V20 features a standard set of hardware for a 2016 flagship:

But then there are some juicy bits:

Where Samsung tries to differentiate its Note series with the S-Pen and productivity prowess, LG wants your phone to be a full-on media workstation.

Like the V10, the V20 includes by far the most extensive set of video and audio features I’ve seen on a smartphone. The camera app features a full suite of manual controls, including shutter speed, ISO, frame rate, exposure controls, gain controls and more.

LG boasted about the V20’s ‘Steady Record 2.0’ mode, which combines optical stabilization, electronic stabilization (based on the gyroscope), and digital stabilization to provide a smoother image with minimal rolling shutter.

Audio may be the real star of the show this time though.

The device has three microphones and dynamically adjusts their gain to cut out noise as much as possible, recording at 24 bits and 48 kHz with linear pulse code modulation (often found in pro video gear). There’s a low cut filter and limit as well for crispy audio, and LG claims the microphones avoid clipping at all but the most extreme volumes (120+ dB).

There’s also a standalone HD Audio Recorder app with a new ‘Studio Mode’, which serves as a pretty powerful audio editor. It supports two-track recording (maybe more, but I couldn’t confirm at the time of writing) and an array of audio mixing tools.

Most exciting to me and my collection of headphones, LG claims the V20 is the first smartphone with a quad digital-to-analog converter (DAC) setup. Basically, the device uses four audio chips simultaneously – instead of the usual single one – to reduce distortion and ambient noise “by up to 50 percent.” It also supports lossless formats like FLAC, DSD, AIFF and ALAC natively.

I spent a few minutes listening to audio out of my power-hungry Audeze EL-8, and the V20 handled spectacularly. At the very least, I seemed to get more volume out of them than I could manage from audio heavyweights like the HTC 10 and Axon 7. My Note 7 was far behind, playing audio side by side.

Also, I don’t care what anyone says – having an IR blaster is awesome. Not everyone has a fancy smart TV, you know?

As the first device to be announced with Android 7.0 Nougat, the V20 is getting a big head-start on competing devices. LG’s custom UI is still in tow, slightly tweaked over the G5 to incorporate the V20’s media features and some of Android Nougat’s features.

There’s a Hi-Fi button right on the notification panel, for instance, if you want to make sure you’re getting the best audio possible, or would rather conserve a bit of battery.

Meanwhile the V20 supports split-screen mode again, a feature that had been conspicuously removed from the G5. This time around it’s using Google’s native implementation though, which should make for a smoother experience.

The device also features Nougat’s in-app search, which allows you to find text not just through the Web, contacts, emails and the like but also within specific apps.

I’m still not a fan of the UX 5.0’s black-on-white wireframe aesthetic – it looks straight out of the 80s – but at least it didn’t hinder performance on the G5. The V20 seemed to perform just as well. I haven’t been able to slow it down, unlike the Note 7 and its heavier interface.

So far, I like what I see. Rather than competing directly with the Note 7 and other 5.7-inch devices, the V20 is going for a very specific group of users.

Whether that niche is wide enough for the device to fly off shelves, I don’t know. But I already like the V20 more than I ever liked the G5 due to its more durable, elegant design and more sensible approach to a removable battery. At the very least, it makes the audiophile within me a little giddy.

LG is remaining fairly close-lipped about the device right now. It will be available in Korea starting this month, followed by more information for other regions “in the weeks to come.” Naturally, that means no word on price yet either.

In the meantime, we’ll be spending more time with the device in the coming days – stay tuned for our full review soon.