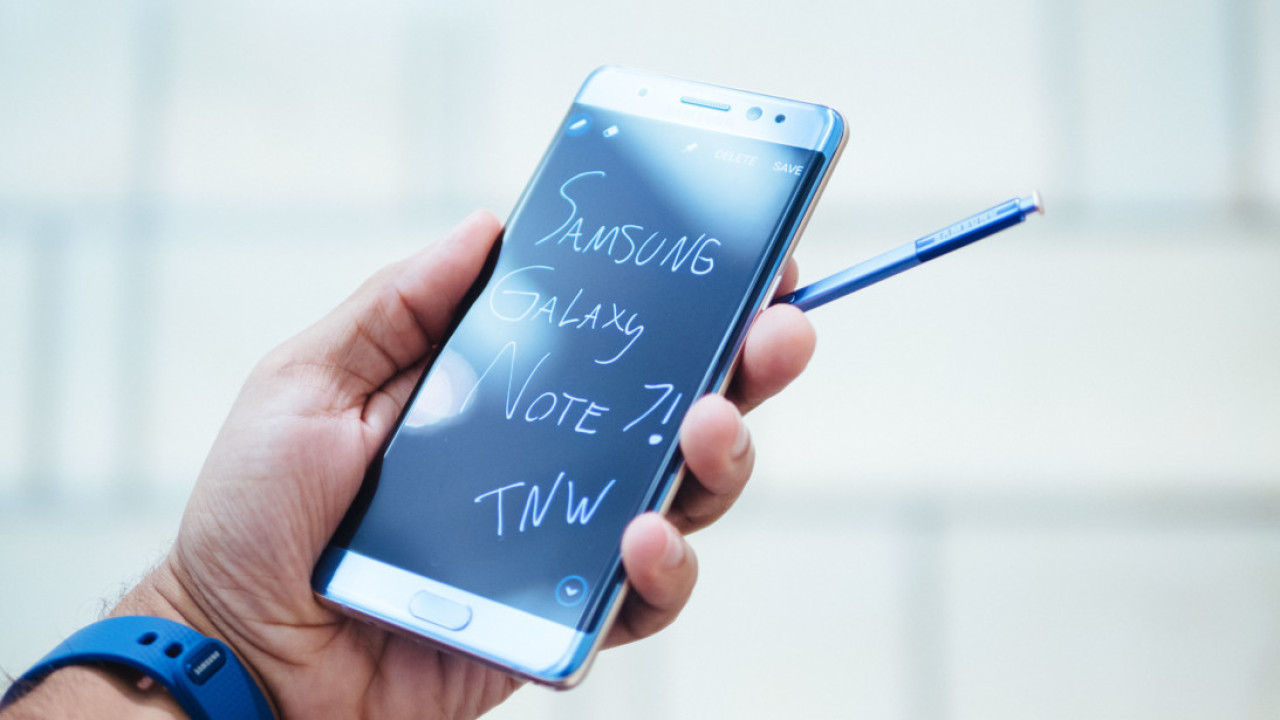 After months of leaks, rumors and speculation, Samsung has revealed the dual-curved-screen Galaxy Note 7 at last (yes, Samsung skipped the 6) – and we got to play with it beforehand.

The phone is largely the same as the Galaxy S7/S7 Edge, with a few extra bells and whistles for its larger screen. Here are the key details:

Unlike, last year’s Note 5, the Note 7 has the same processor and RAM as its S-series sibling, so we wouldn’t expect a huge performance boost this time around, although that can always come from software optimizations.

Still, there are some neat touches; Gorilla Glass 5 is supposed to be 1.8 times harder to crack than Gorilla Glass 4, and should survive “80 percent” of shoulder-height(~1.6M) drops onto concrete. I also appreciate the default 64 GB of storage. It’s a bit odd that the Note 7 has a slightly smaller battery than the S7 Edge while sporting a larger screen, but the Note 5 was already a great performer with just 3,000 mAh.

First things first: the new coral-blue-and-rose-gold is awesome. The pictures don’t quite do it justice, and I want this color option on all phones. You also have the more  standard black, silver, and gold (outside the US).

Color aside, the Note 7 is a striking device to hold. It’s just so… small. I mean, obviously not S7 small, but much smaller than any 5.7-inch phone has the right to be.

This is in part thanks to small bezels using capacitive buttons (thank you, Samsung), but like the S7 Edge before it, the dual-curved display is what really lends itself to making the phone feel small in hand (the Edge Plus series is no more). Samsung emphasized that it worked to make the phone’s shape perfectly symmetrical front and back, and it gives the phone this smooth, pebble-like feel while also providing more solid purchase in the hand.

The phone is just 0.3 mm thicker than the Note 5 before it, but a full 2.2 mm slimmer from side-to-size and slightly shorter as well. It’s a noticeable difference, and it makes the phone substantially easier to hold and use in one hand.

This is crazier when you consider how much more this phone is packing than its predecessors: an extra 500 mAh of battery, an iris scanner, a larger camera sensor, almost camera hump, a microSD slot, and IP68 waterproofing. Against other 5.7-inch phones, it’s no competition, especially considering the Note 7 still has to, you know, fit a stylus in there. 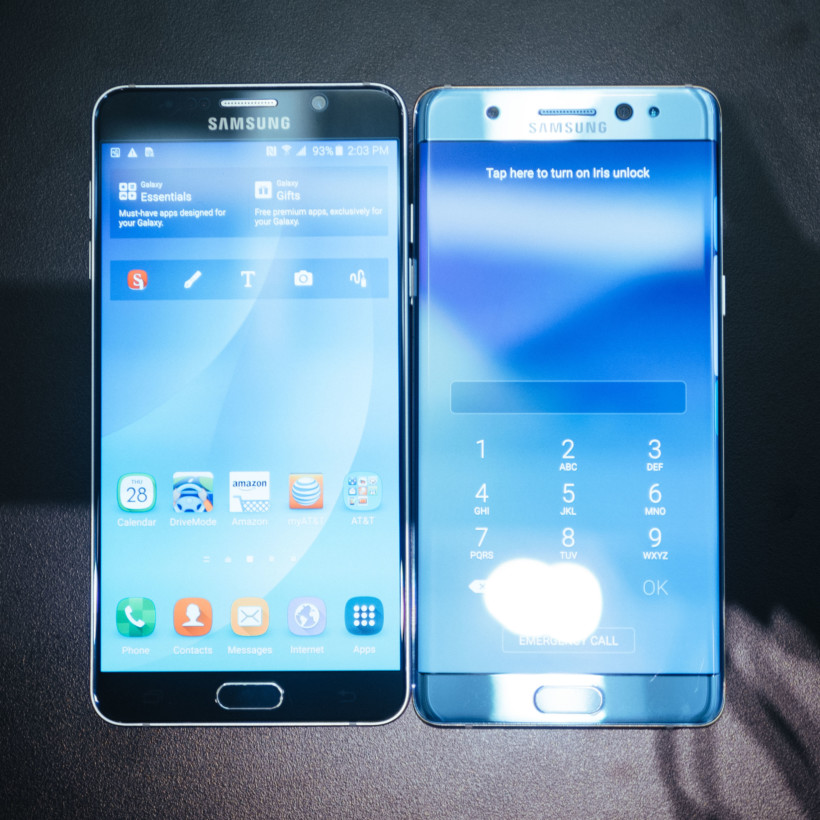 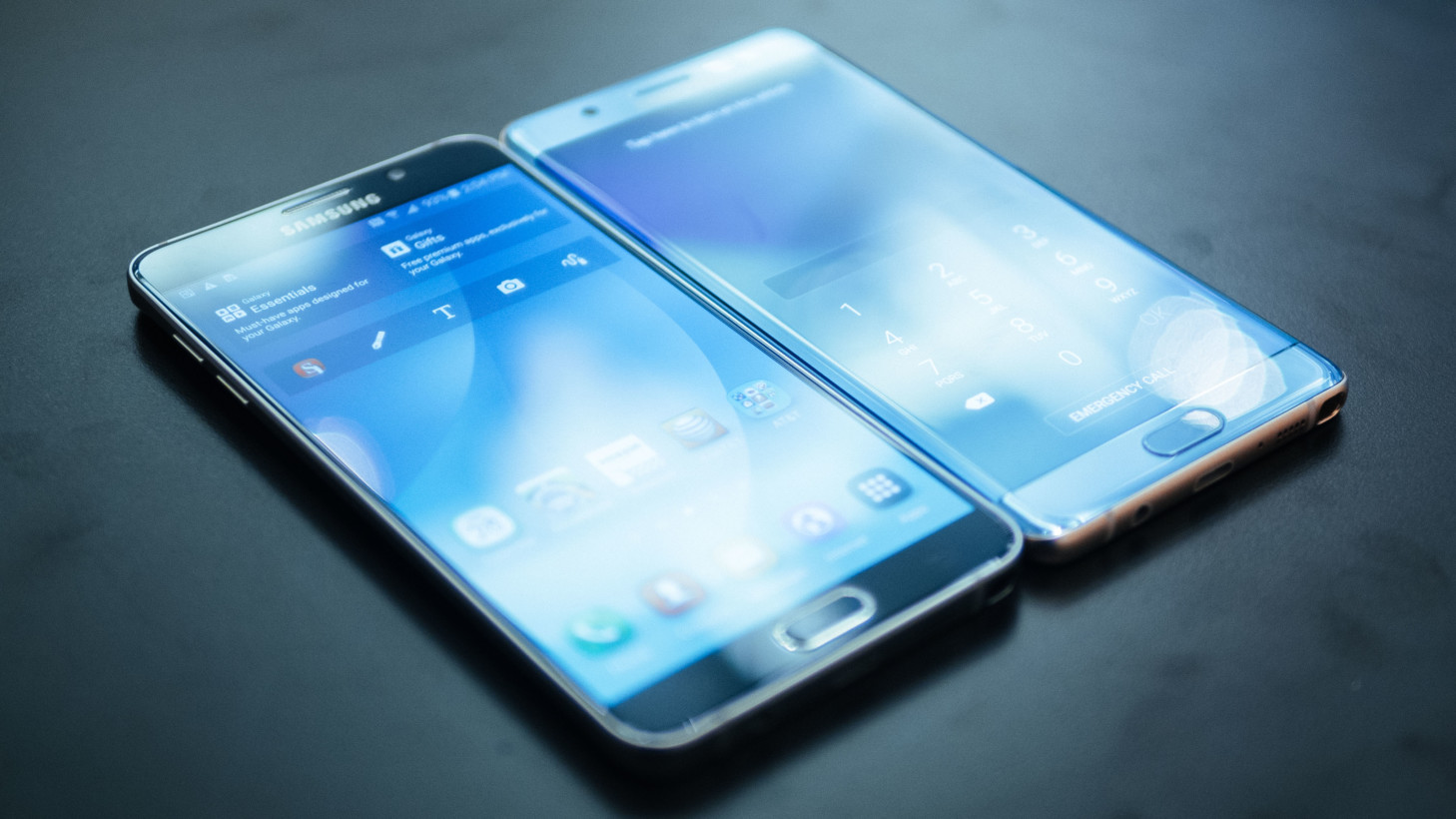 Basically, Samsung has mastered the art of fitting a large screen into as small a phone as possible, and I wish other manufacturers would follow suit.

Take the Note 7 vs my 5.5-inch Moto Z, for instance. The latter has abnormally large bezels to accommodate the innards for its modular connector… but still, the difference is striking:

The company tells me it was able to do this in part by using tougher materials: 7000 series aluminum and Gorilla Glass 5. The latter is a particular relief given the dual-edge screen is more likely to make contact with the ground in case of a drop. The back also uses Gorilla Glass this time around.

As a side note, the AMOLED display looks as wonderful as ever, but we didn’t get a chance to try out the HDR video feature. Still, that’s sure to be a more tangible improvement than higher resolution (VR notwithstanding).

The S-Pen has been improved too, mainly thanks to a smaller, grippier tip. It’s now 0.7 mm thick, which is the same as a ballpoint pen and half of previous generations. And silly as it may sound at first, the waterproofing can come in handy for those times when you need to use your phone in the rain and the wet screen isn’t responding to your touch.

Software: TouchWiz might not be so bad after all

Samsung’s software tweaks have gotten a bad rap with the tech press for cluttering up the Android experience, but so far, the Note 7’s updated TouchWiz is making a pretty strong case that stock Android may not always be best Android.

The UI has been cleaned up overall, with simpler menus that look a little closer to stock Android. Samsung says it’s even gone through the trouble of matching the color of the UI to the coral blue of your phone. The camera app has less buttons now too, using swipes to access filters and settings.

Many users are sure to appreciate some of the app streamlining. While the phone still has a proprietary gallery app instead of Google Photos (for good reason, this time around), Samsung has reduced its different note-taking apps from four (Action Memo, Memo, Scrapbook, S Note) to just a single Samsung Note app. It’s more powerful too, allowing you to blend colors like real paint and supporting the new pen’s added sensitivity.

Another neat trick – you can hover over text with the S-Pen to magnify it (up to 300%) or even instantly translate it. We’re living in the future, folks.

The best S-Pen feature though is an update to one introduced last year with the Note 5. Whereas before you could take out the S-Pen and immediately start writing on your phone without unlocking the device, the Note 7 one-ups it with an always-on display.

That means your notes are displayed permanently without having to turn on the phone to view them, which I can see coming very in handy for shopping lists and the like. For the first time, you can use a Note phone like a real notepad. And unlike before, you can scroll through to have an infinite amount of space to write notes, rather than just what fits on your screen.

But my favorite new feature is the GIF maker. The screen capture tool lets you select a portion of your display that you want to save as an animation with the S-Pen, tap record, and then save. You can either save to your gallery or share, and you can even edit the GIFs frame by frame and set them to different qualities. I will be sharing all the GIFs.

Iris scanner: an extra tier of security, not a fingerprint replacement

Basically, Samsung wants you to think of it as an alternative unlock method when convenient, or a second form of authentication when you want extra privacy.

For instance, fingerprint scanners are sucky when your hands are wet, and can be hard to access when you’re busy carrying something. The iris scanner has no such problems, and judging by Samsung’s demonstration, it works almost as fast.

The key word here is ‘almost’ though, which is why Samsung emphasizes using the scanner as secondary authentication (plus, the iris scanner has a lower false-positive ratio).

The phone features a ‘secured folder’ where you can store private files as apps, which you access using the iris scanner. You can easily save  private photos to this folder using Android’s share function, and it even includes an incognito browser for when… you need to buy your bae a special gift.

That’ll come in handy if you’re the type of person who tends to share passwords give fingerprint access to your family or partner, but would still like to keep some things private. Of course, Samsung could have done the same with a password, but this is faster and we all know how terrible people are at choosing passwords.

Samsung is offering a whole lot of phone in a relatively small package. While it doesn’t have the very best specs in all senses – there are phones with bigger batteries or more RAM – they’re still top notch and Samsung adds some unique touches that differentiate it from pretty much any manufacturer. And for stylus fans like me, Samsung continues to be pretty much the only mobile manufacturer to make the digitizer worth it. 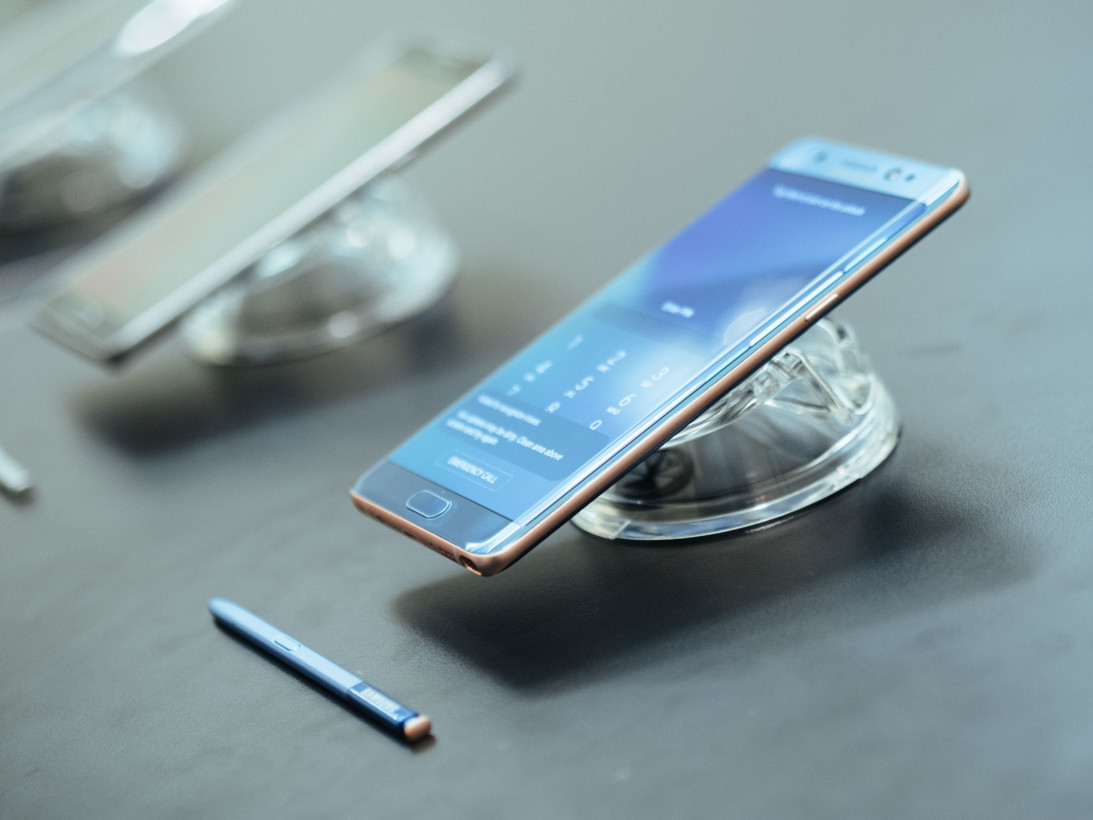 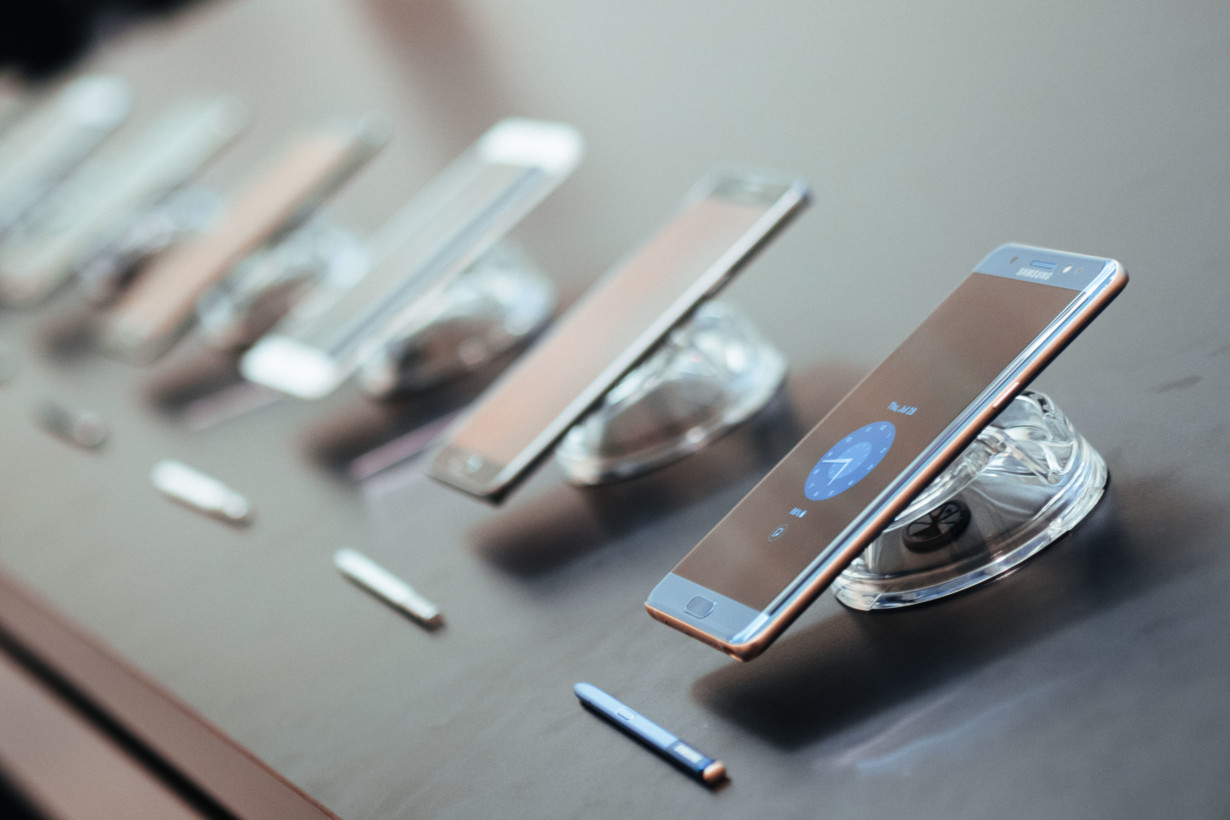 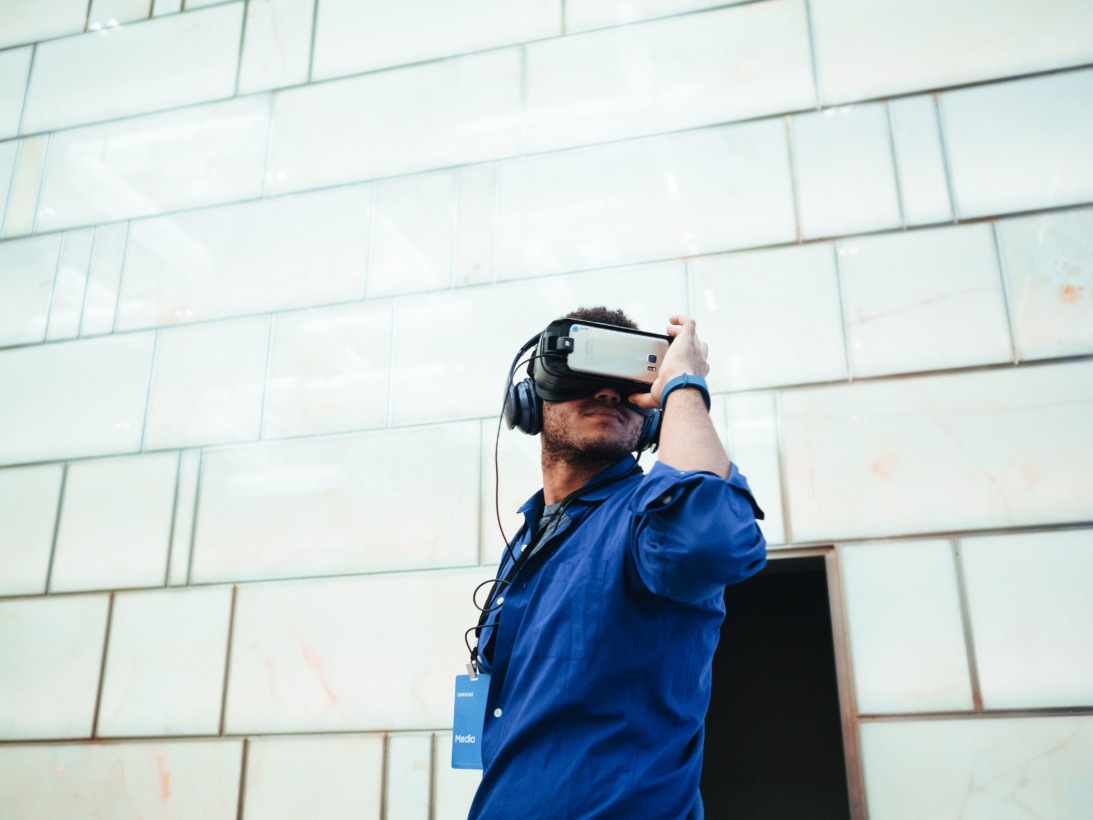 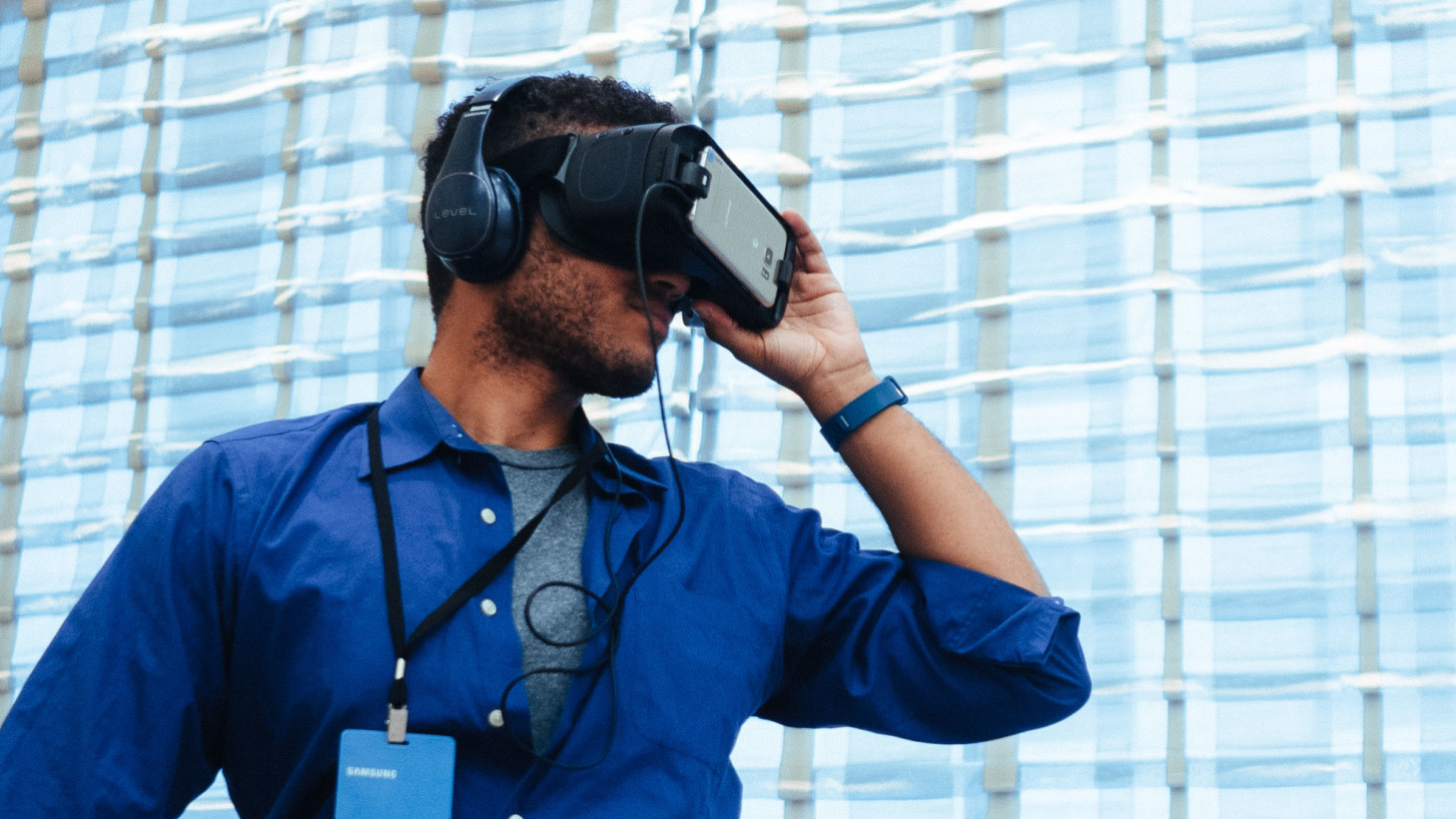 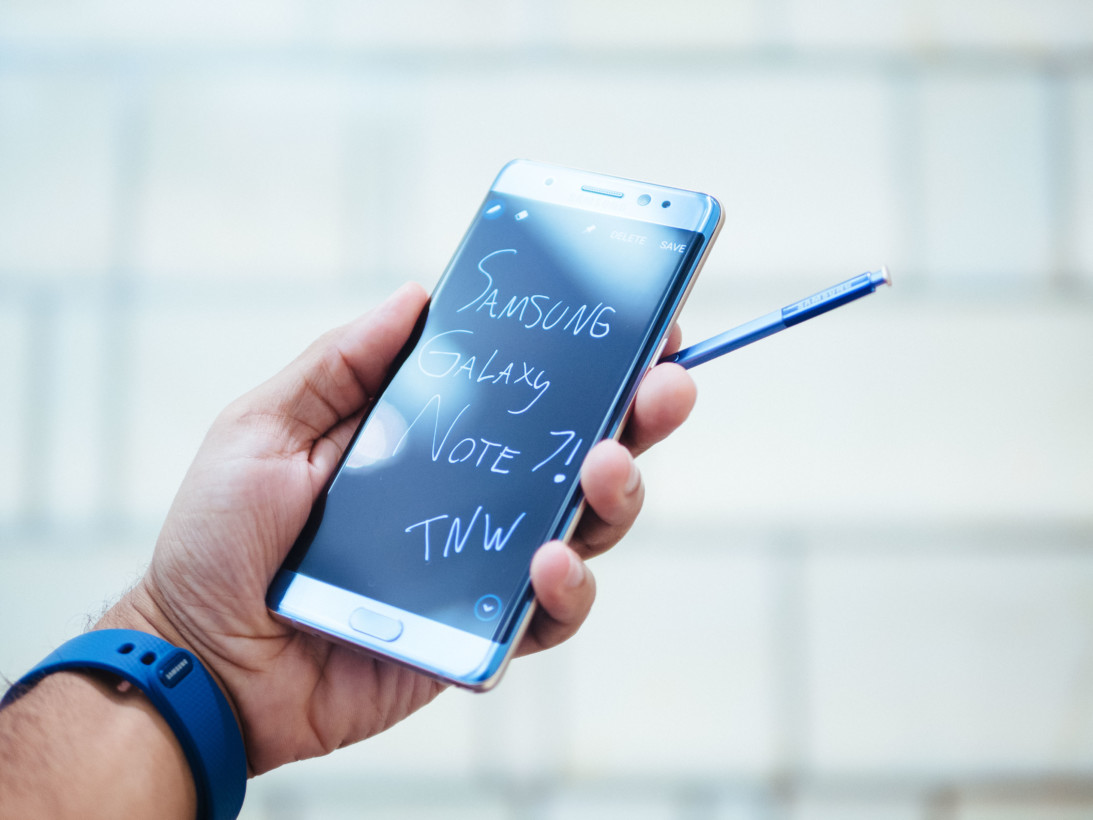 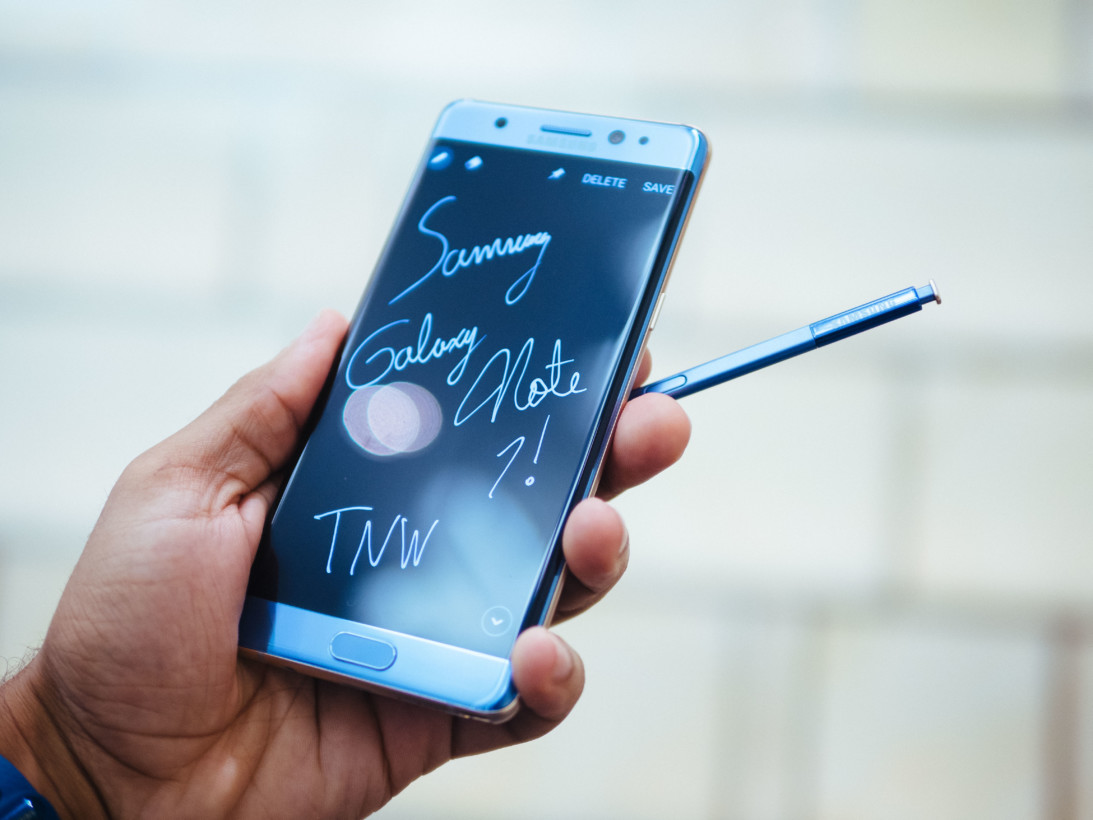 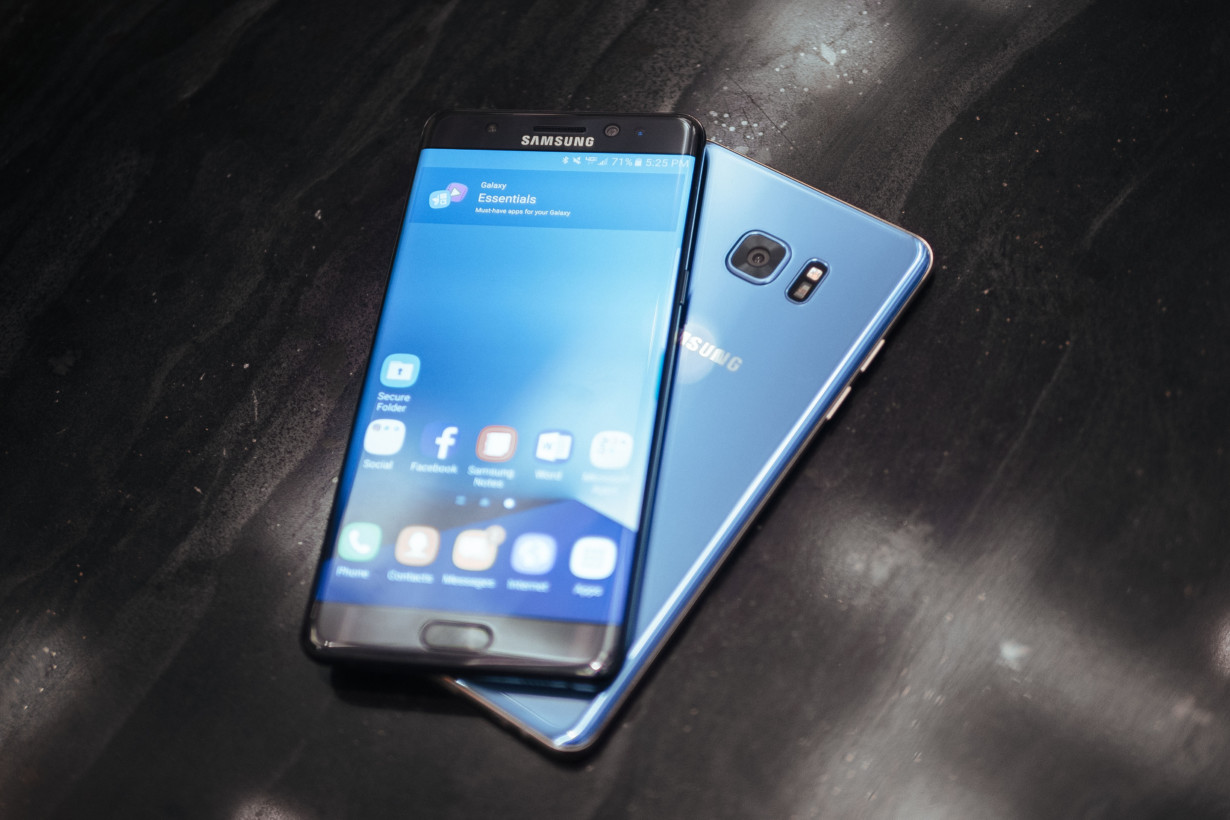 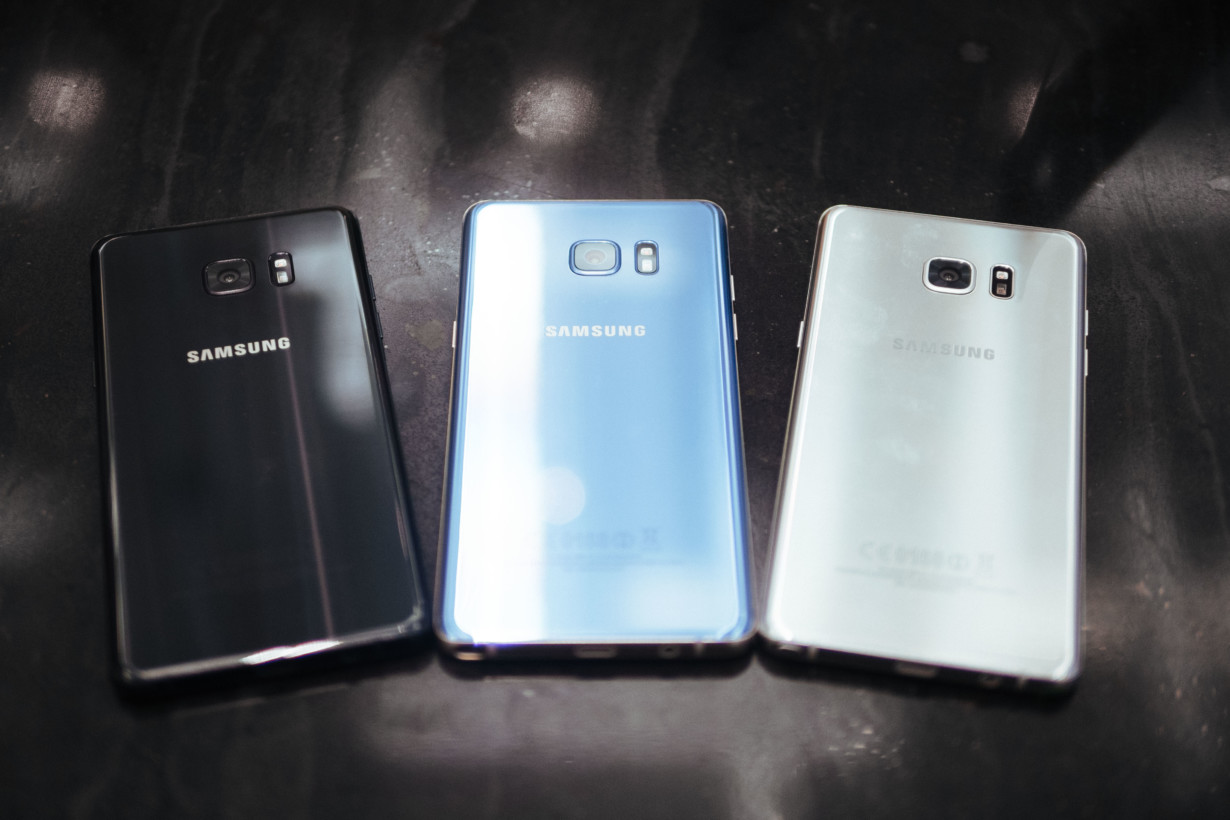 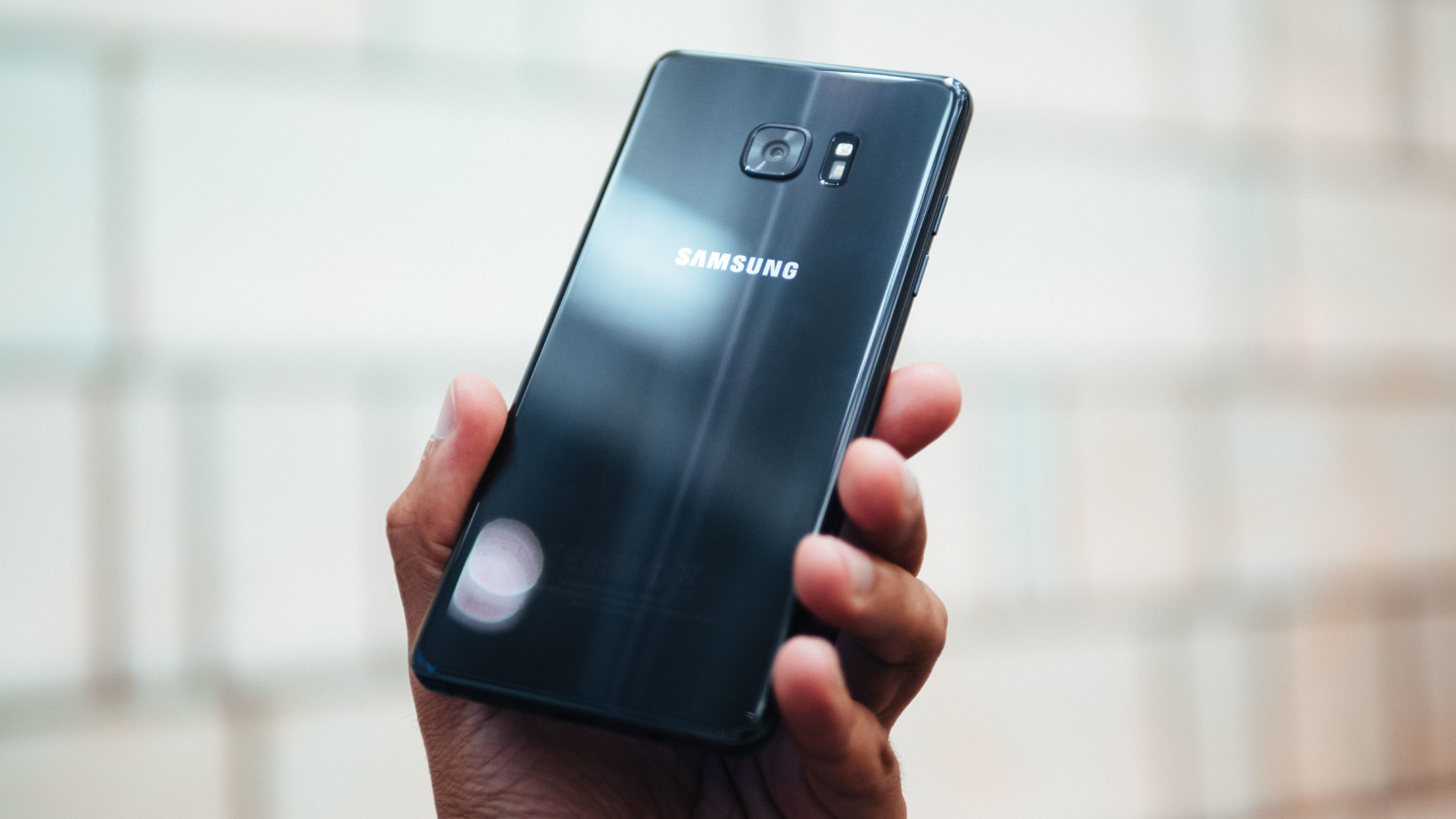 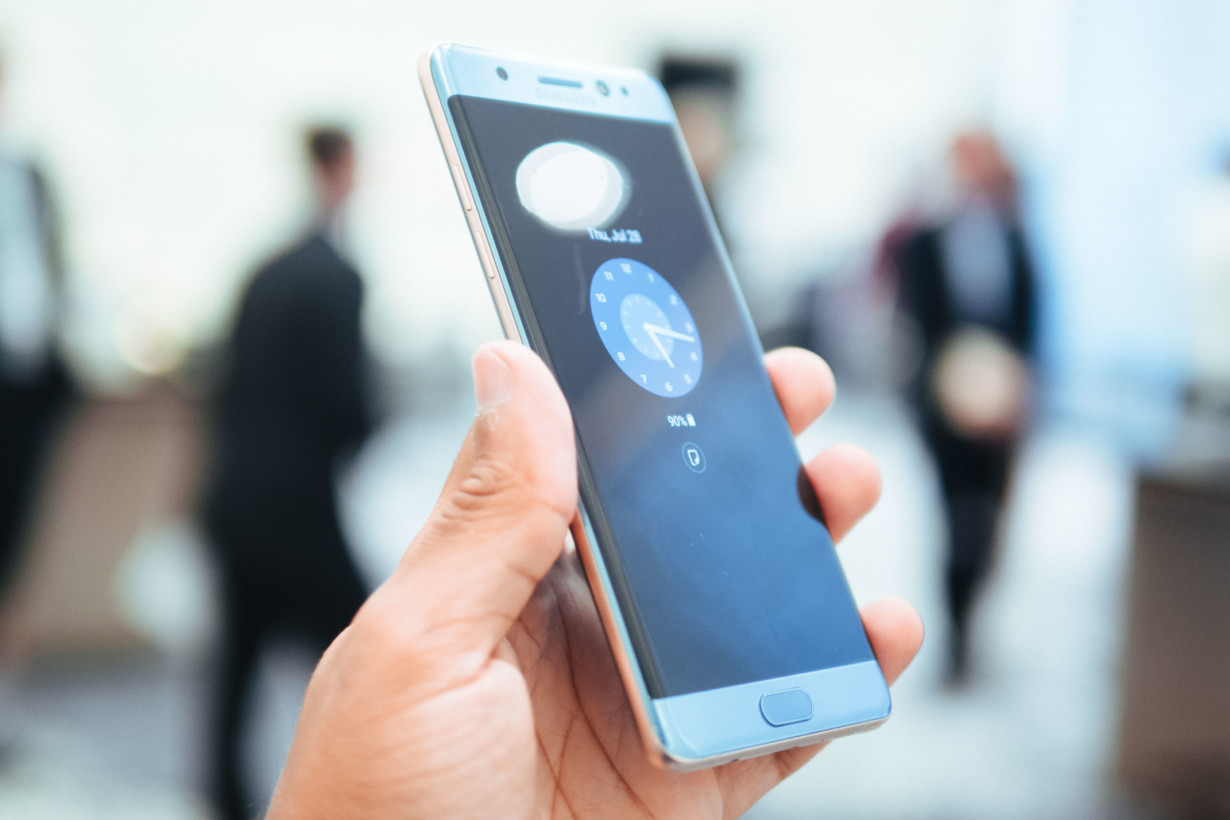 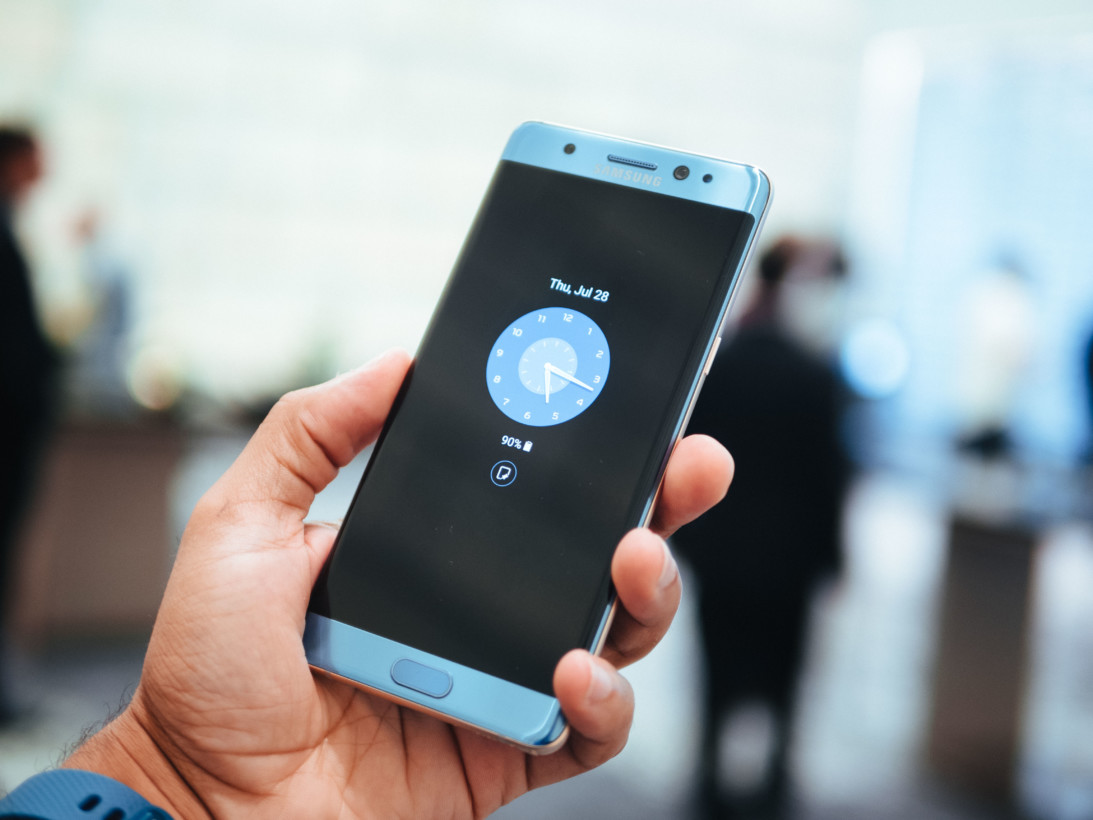 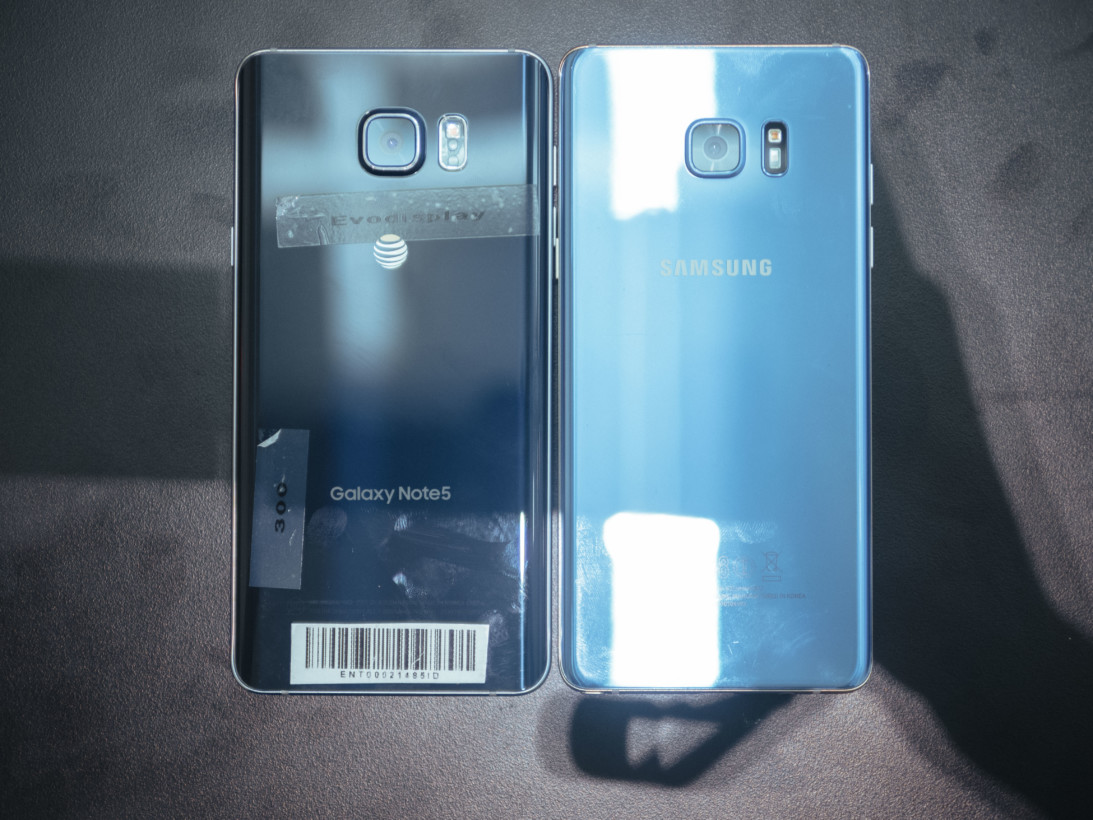 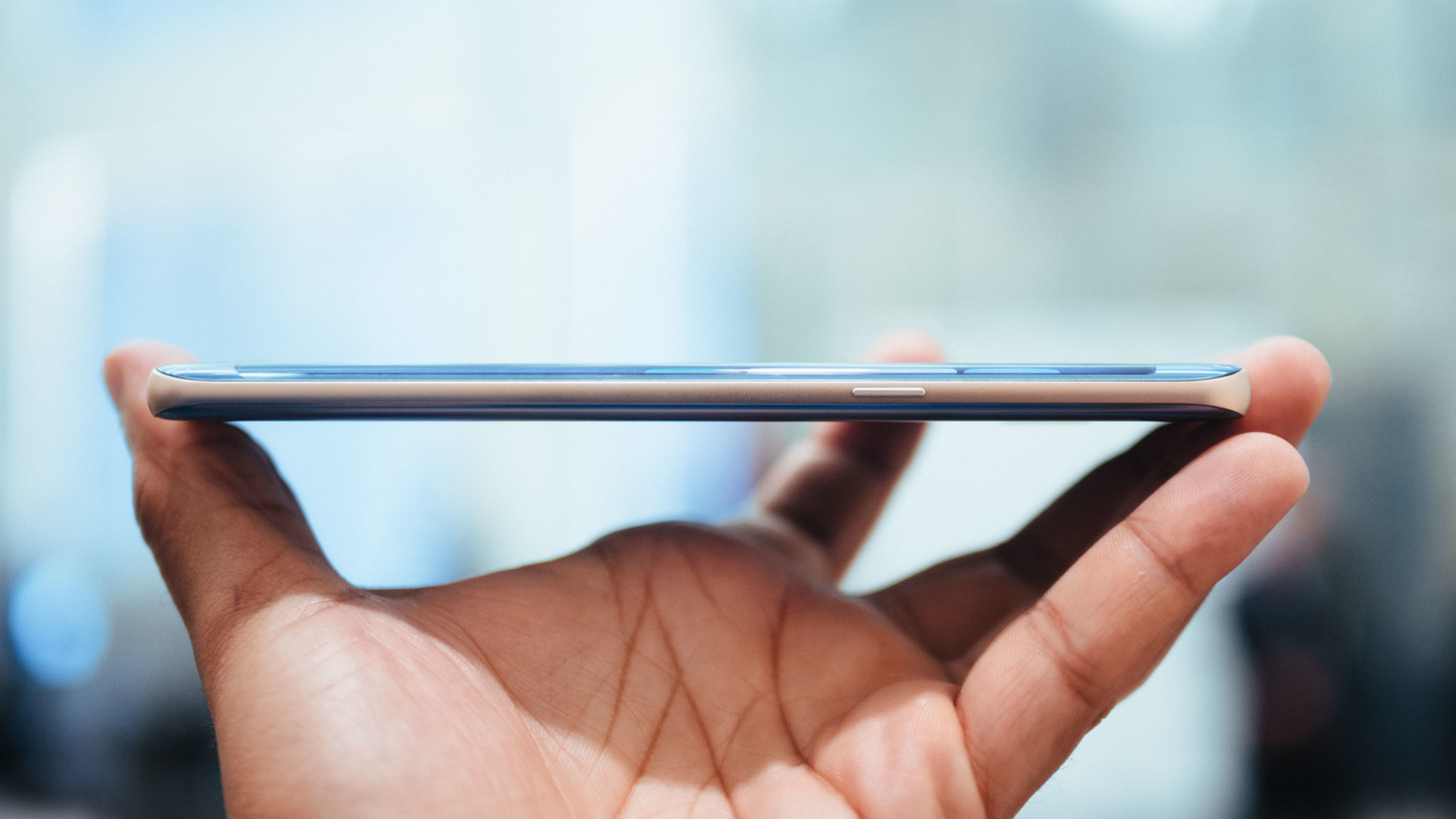 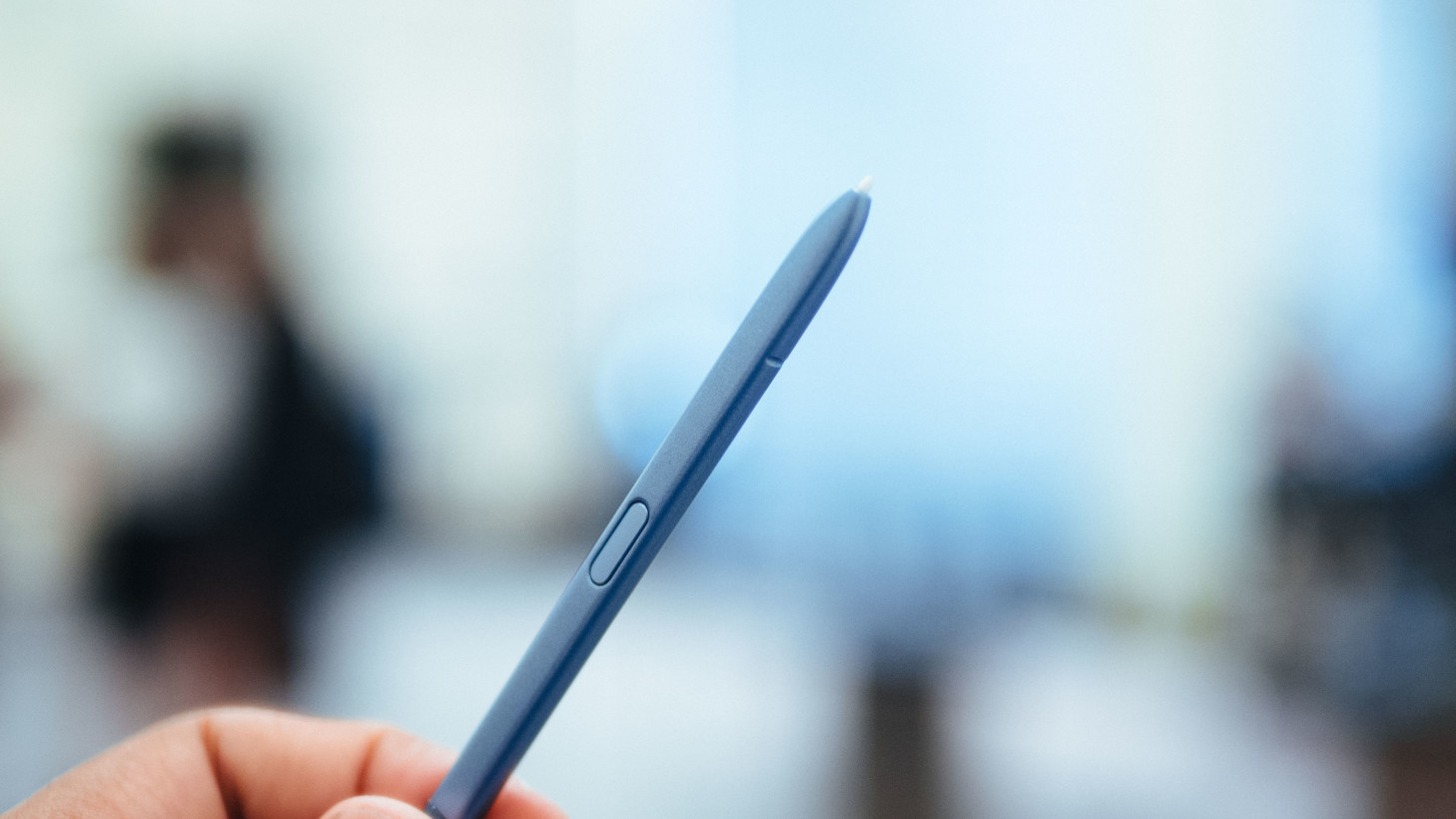 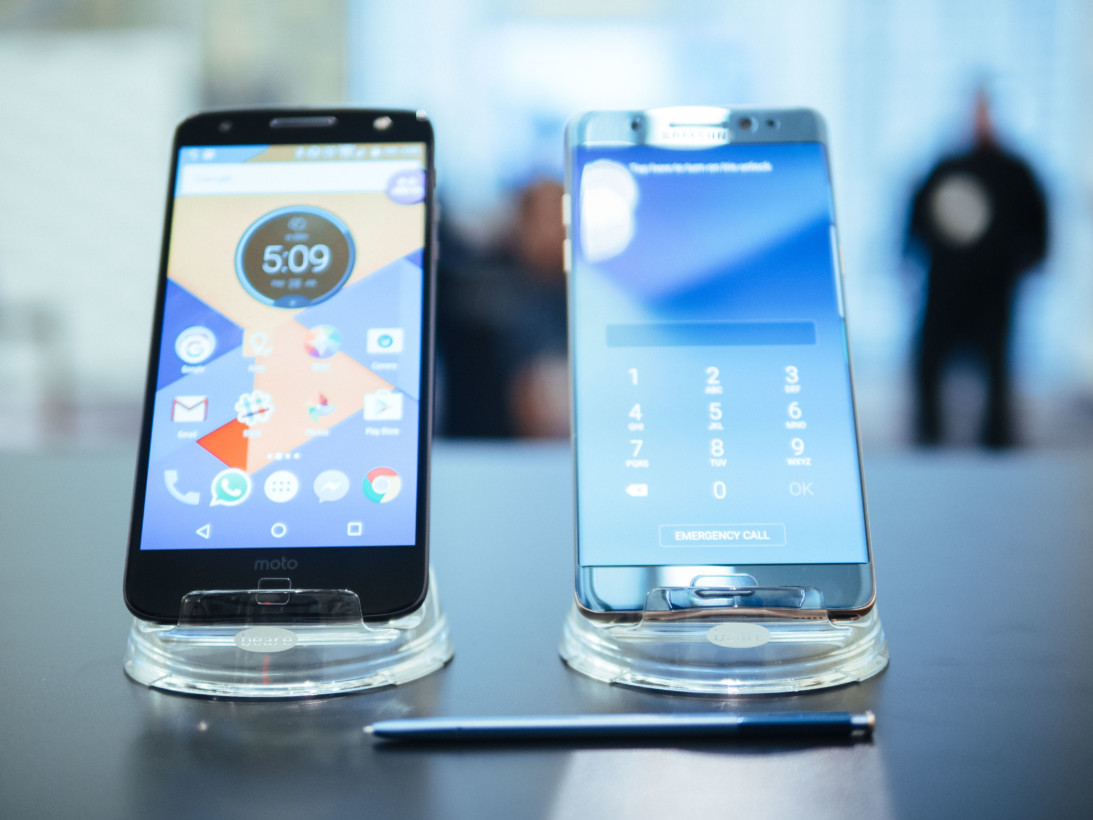 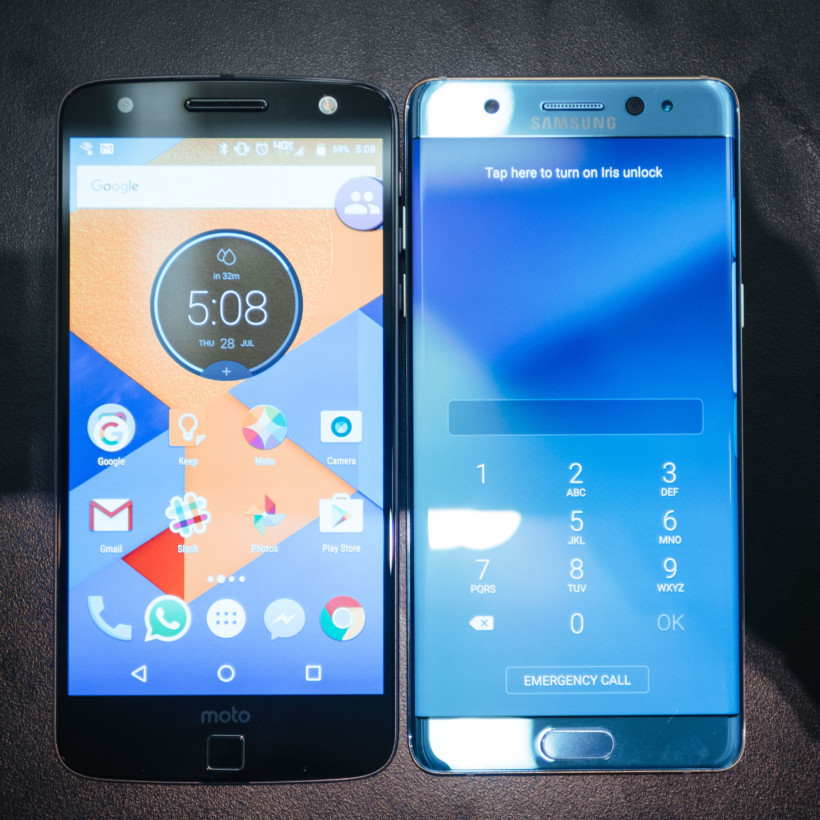 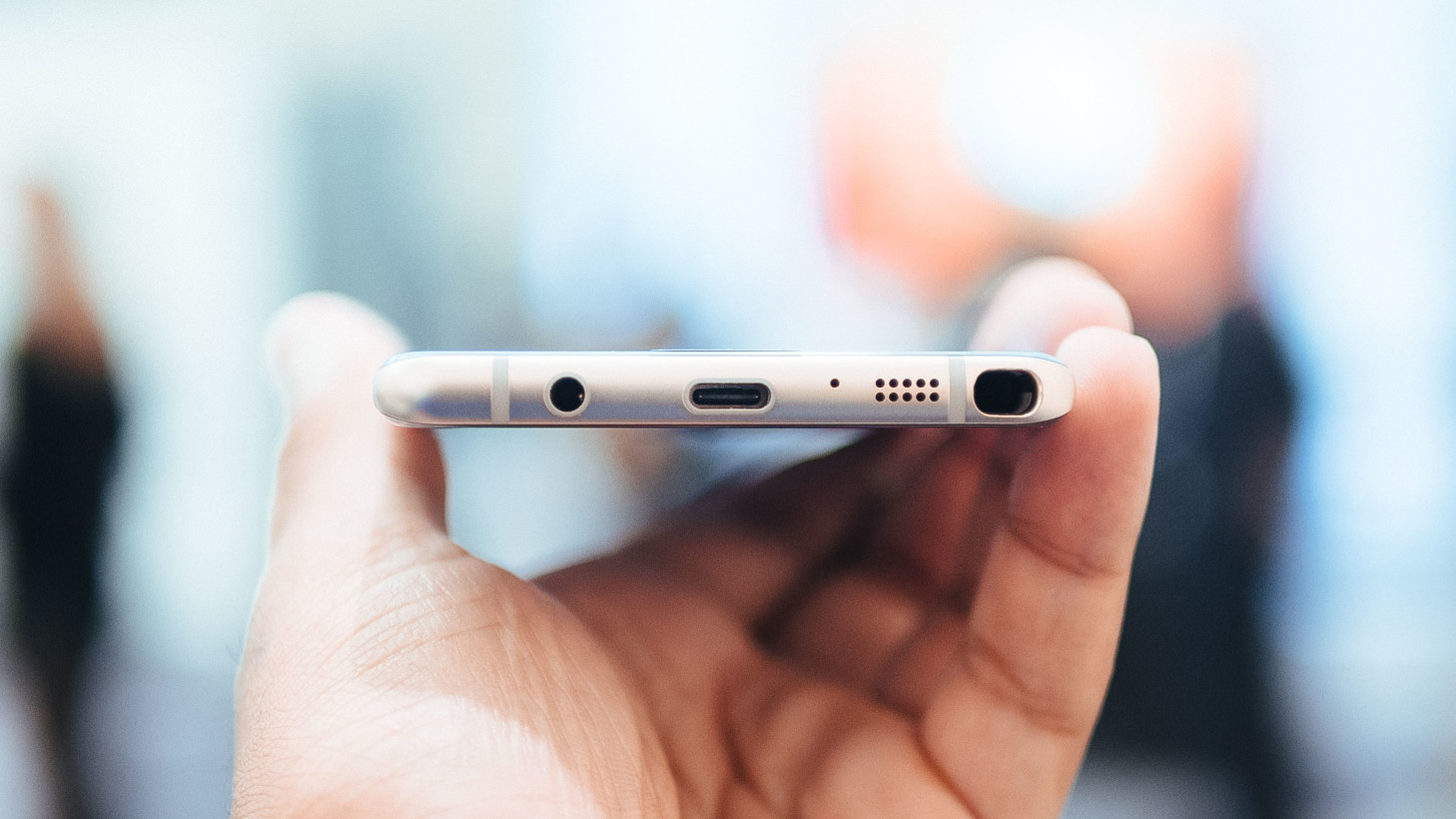 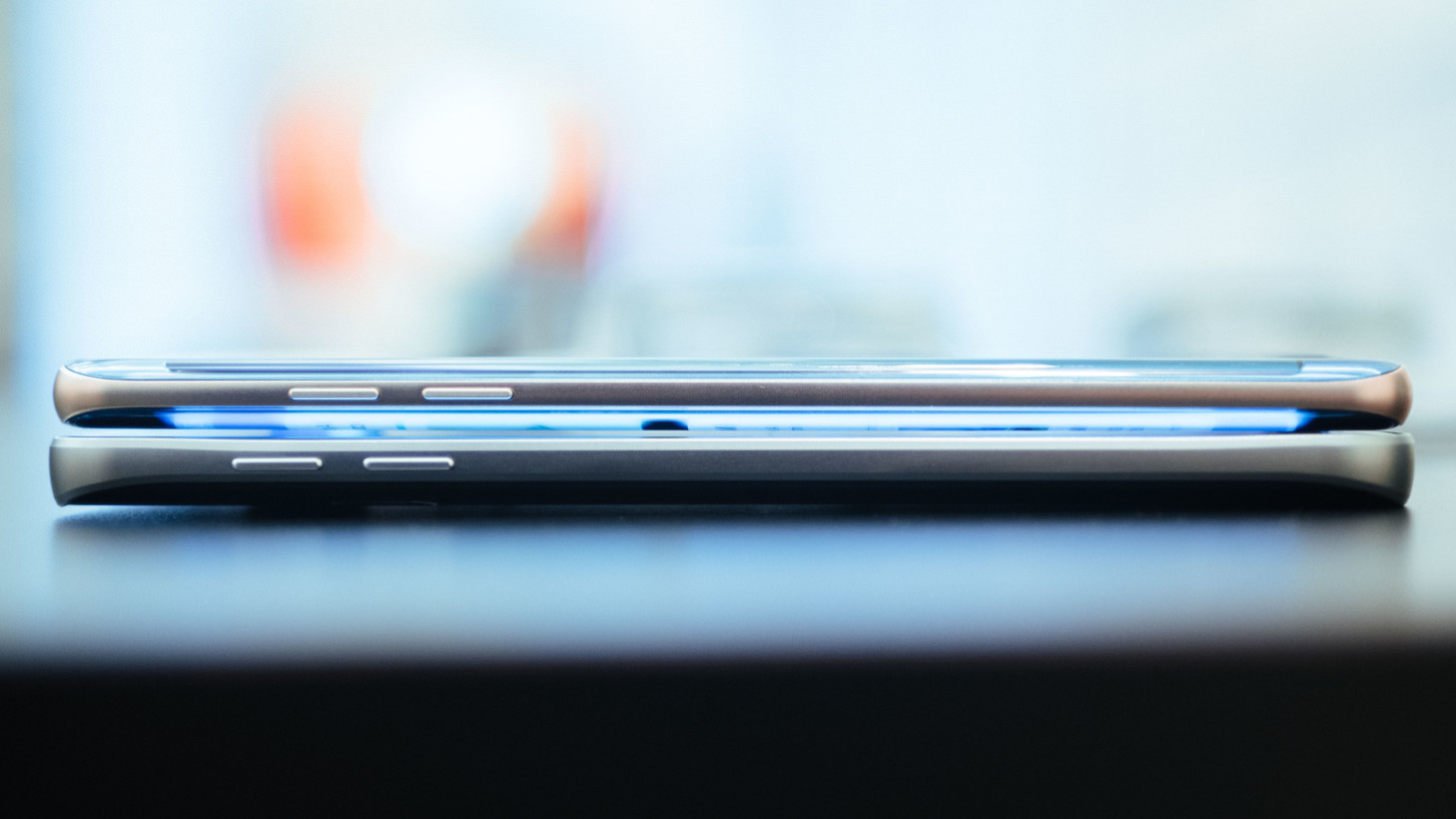 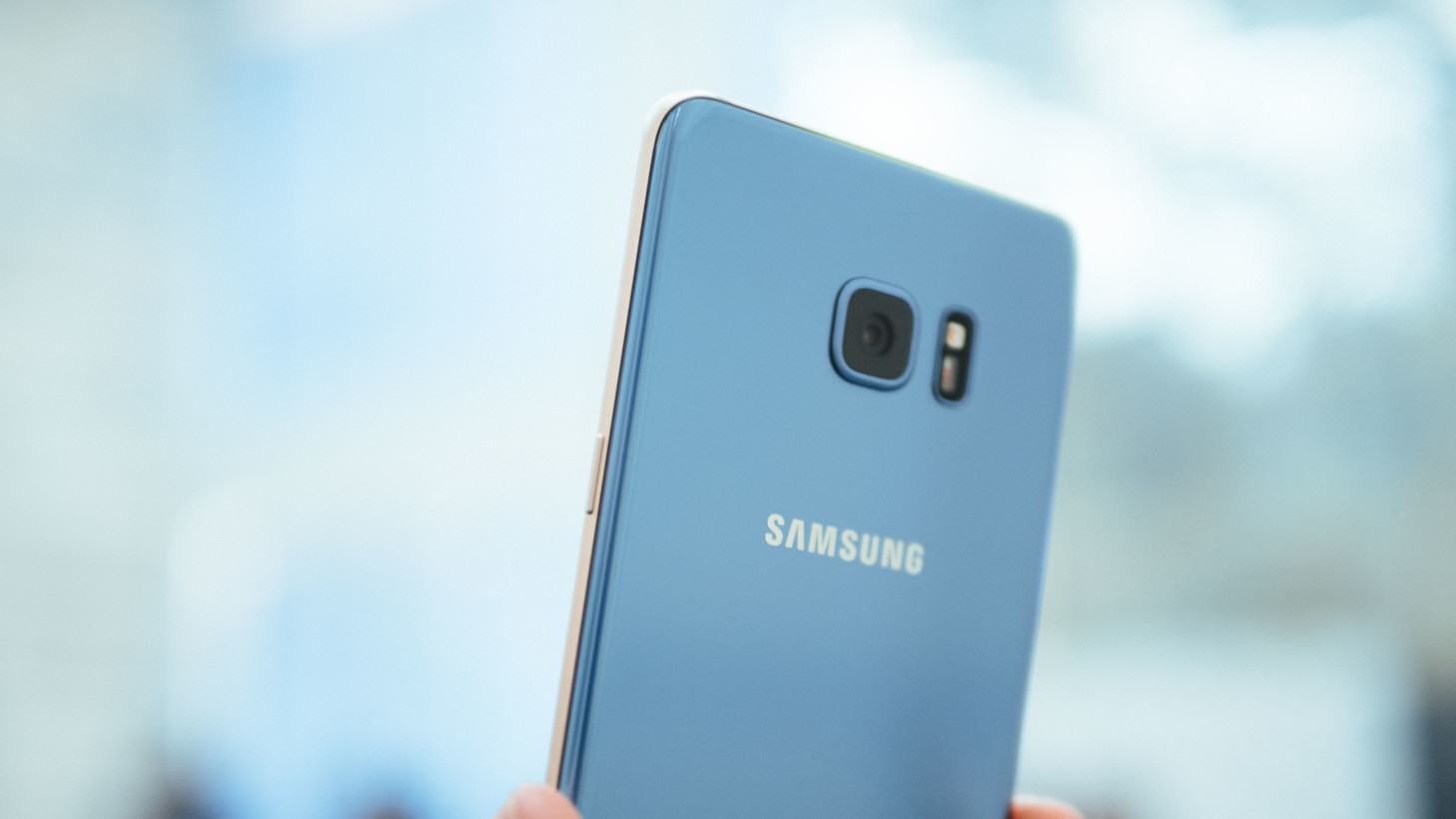 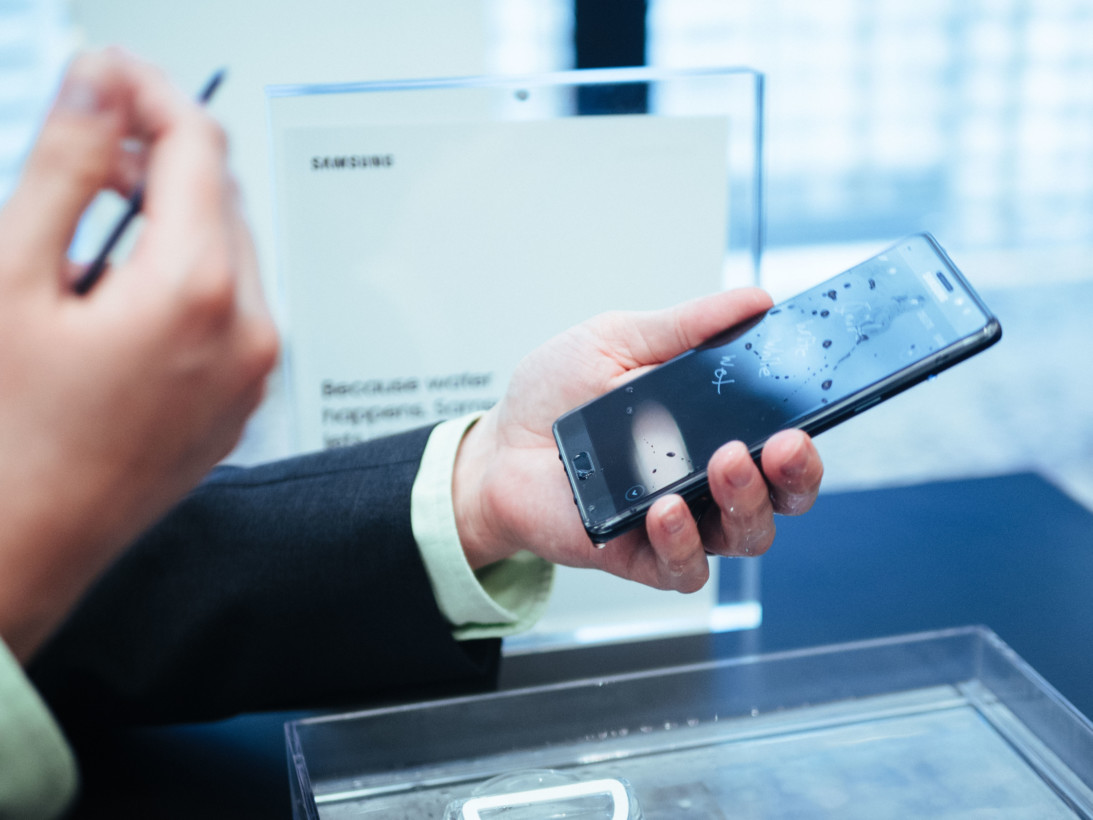 Of course, we’ll have to put the phone through its paces to see how longer-term factors such as performance and battery life play out, but if it’s anything like the Note 5 (my favorite phone of 2015) combined with an S7 (one of the best phones of 2016), then I think it’s safe to say Samsung will have a winner on its hands.

Samsung isn’t announcing pricing yet (it’s up to carriers), but it is offering a purchase promotion: pre-order and you can get a free Gear Fit 2 or 256 GB memory card. Pre-orders start tomorrow, August 3, in the US, and it will be available August 19.