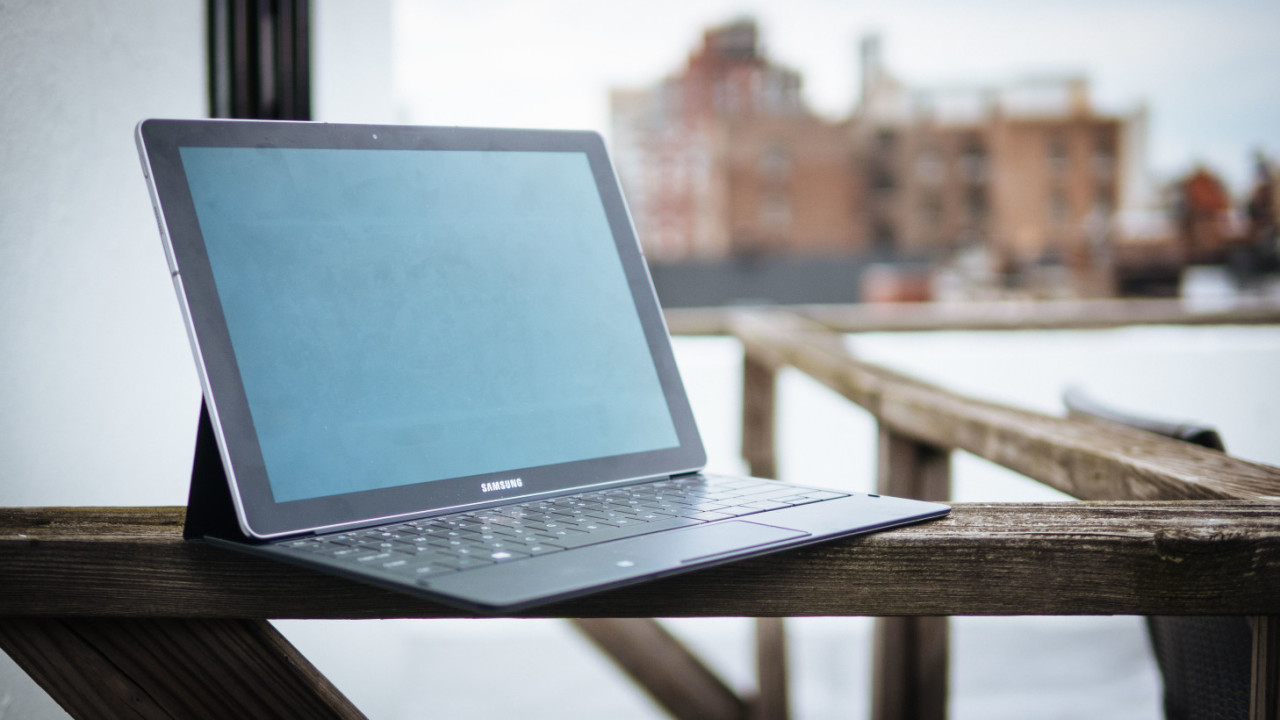 Microsoft has been telling us that tablets are the future of personal computing since the original Surface and Windows 8, yet after all these years, very few Windows tablets have been able to hit the size, weight and battery life we’ve come to expect from Android and iOS tablets.

Samsung tried to change that with the TabPro S. We liked it a lot when we first tried it out, but naturally needed more time to assess the finer details of performance and battery life.

Thankfully, it’s held up just fine, especially at its $899 price.

Our thoughts on the design are simple: this is a good-looking, well-built tablet.

Samsung’s designers have been at their best since the Galaxy S6, and that design language continues to be reflected here. An aluminum frame borders the tablet, and its back panel and keyboard cover come in either white or black.

The keyboard cover itself is well-built too, with a high-quality leather build that snaps magnetically onto the back of the tablet with a satisfying click. Unlike the Surface line, you can only adjust the tablet to two angles, but unlike the iPad Pro, you don’t have to be an origami artist to figure out how to set the different positions.

Spec wise, these are the highlights:

Although the Tab ProS is a fairly striking tablet in its own right, the display is what really holds you attention, if only for being so different. That’s because it uses an AMOLED panel instead of a traditional LCD, one of very few PCs to use the technology.

We’ve become used to the pure blacks of AMOLED on many smartphones, but it’s rare to see it on a screen this size, and it makes for a great night-time movie experience; shadows fade into true black, instead of the dark-grey letterboxing you normally experience with LCD panels at night.

There are some caveats to the technology though: the Pentile subpixel structure means that you can notice some faint coloration green and purple coloration around text and lines if you look really closely, especially at the screen’s good-but-not-great 216 ppi.

The screen hue shifts to slightly purple or green hues off-center, and the colors are too vibrant to be accurate; it’s not the ideal choice for photo editing. I’m also slightly concerned about longevity – OLED panels are more prone to burn-in than LCD ones.

However, my biggest issue with the TabPro S panel doesn’t have to do with the display tech at all: the screen’s automatic brightness is too conservative. The screen gets bright enough for use outdoors, but indoors Samsung seems to have calibrated the screen for conserving battery life.

Even at maximum brightness, the screen was generally dimmer than I preferred, and I found myself disabling the adaptive brightness setting when editing photos or watching video.

Caveats aside, it’s still a great panel, and the blacks alone are worth it – it’s just not perfect.

As for audio, the speakers are okay. Adequately loud for small rooms with decent stereo separation, but little bass presence. They seem to be design to spread sound out around a room more than directional audio – cupping your hands around the speakers makes for a big volume increase. Sound out of the headphone jack is also good, but nothing to write home about.

After spending more time with the TabPro S, I’ve come to conclude the typing experience is decent for a keyboard this thin, but not great in the grand scheme again. I’d rank it somewhere around the Surface Pro 3 – better than the 12.9-inch iPad Pro but worse than the Surface Pro 4, which I consider as good as some laptops. 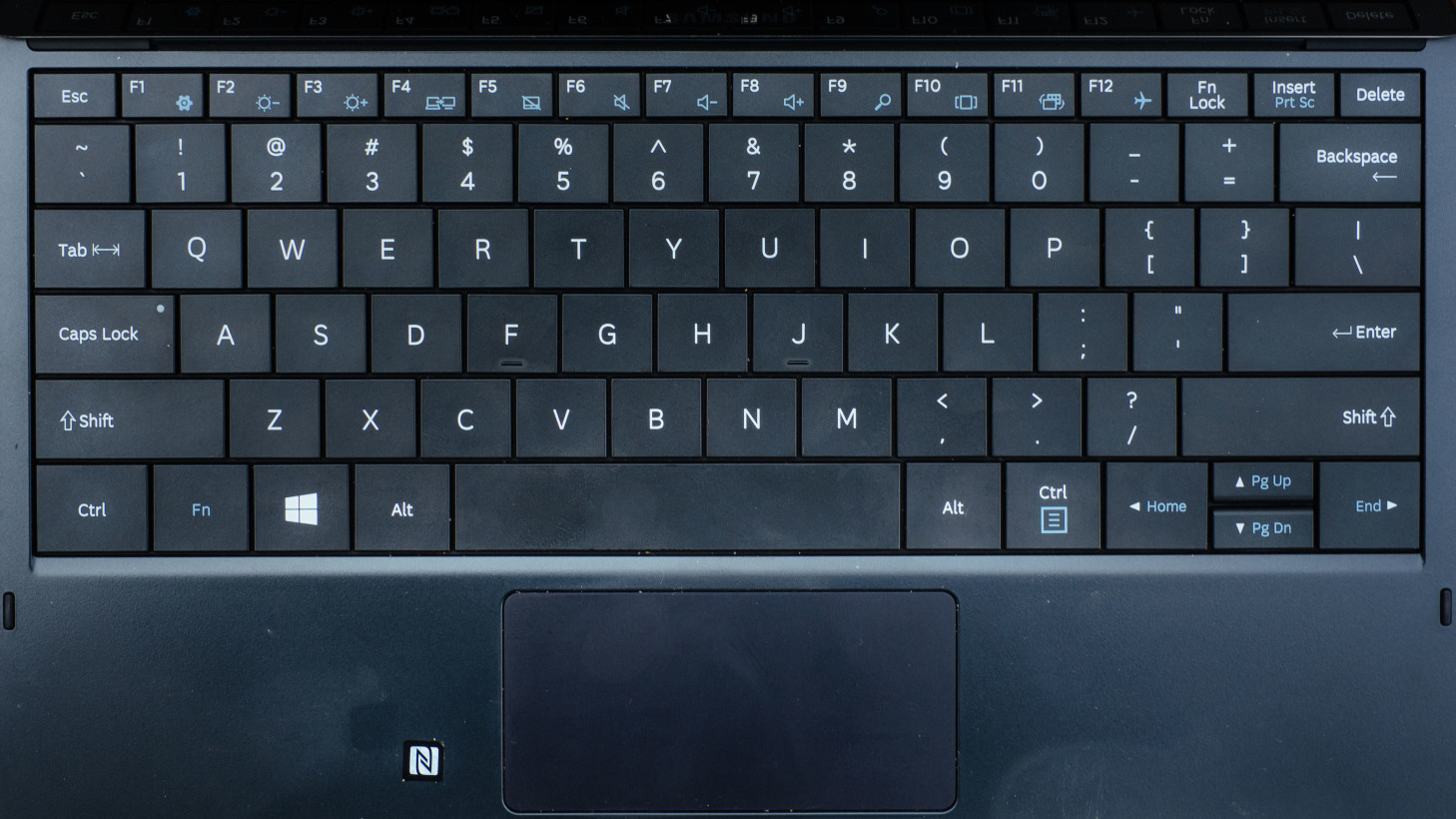 The keyboard was stable enough to be used in my lap, and I didn’t find myself particularly limited by the screen’s two angles.  I’ll take its 1.4mm of travel over the 2016 MacBook’s god-awful keyboard (some of my co-workers swear by that keyboard, but I hate it).

That said, the keyboard flexes more than I’d like, and the overall typing experience feels a little ‘meh.’ After being spoiled by the Surface Pro 4 and Pixel C, I’ve come to expect better.

The trackpad is surprisingly good. A little on the small side if you’re coming from a laptop (close to the size of the Surface Pro 3) but responsive with no jitteriness and smooth scrolling.

The TabPro S is not a desktop replacement, nor is it even in the class of the Surface Pro with a max of 4GB RAM. That doesn’t mean you should ignore it as an everyday computer.

The tablet is mercifully free of bloatware, and Windows 10 felt smooth throughout my usage. It’s powerful enough for some light photo editing, and it can play back 4K video smoothly (well, except for in Chrome, which is terrible at playing back video everywhere).

I was also likewise mildly impressed with gaming performance. Obviously, the integrated Intel HD 515 chipset will do you no good at high resolutions with more intensive games, but older titles like ‘Portal 2’ or ‘Counter-Strike: Global Offensive.’

That 4GB of RAM does come back to haunt you. While it rarely slowed down, Chrome and Edge did reload tabs frequently when things got really busy – this is not a machine for you if you need to have 30 tabs open at any given time.

In all though, I felt like I could do most of my everyday work on the Tab ProS without feeling too hindered. If your workday revolves around an office suite, you’ll probably be fine too.

Samsung claims the TabPro S can last for up to 10.5 hours, and you know what? They weren’t too off – or at least nor as far off as most PC manufacturers.

I used the TabPro S with a mix of light Web browsing in Edge and video-watching throughout most of a seven-hour bus ride with adaptive brightness maxed out, and managed to get through with 20 percent battery life left. That’s a success in my book.

That said, it’s worth reiterating that Samsung’s adaptive brightness is extremely conservative: Samsung basically tried to keep the screen as dim as it possibly can while still remaining legible. If you disable automatic brightness, expect worse results.

As usual, Chrome is a battery hog, but the Core m3 processor is relatively efficient and doesn’t suffer as much of a battery drop-off as the higher end i-series does when doing more intensive tasks.

Fast charging is a much welcome inclusion; you can charge the tablet from empty in under two hours, making it easy to top up. Single-port issues aside, USB-C is welcome too; it’s pretty wonderful to be able to charge my tablet with the same charger as my HTC 10.

There isn’t that much special about the TabPro S on the surface. It’s a Core M processor with too little RAM and questionable port selection, and at $899 there are certainly more powerful options.

Still, I found myself liking it more than I expected to, probably for much the same reason people like the new MacBook: it’s incredibly portable, good looking, and performs well enough for everyday use. It’s lighter than both the MacBook and the iPad Pro, and is a pleasure to use on the go.  If only Microsoft had the apps to match.

That makes it probably the best Windows tablet at being ‘just a tablet’ so far – and it’s not too shabby as an actual computer, too.