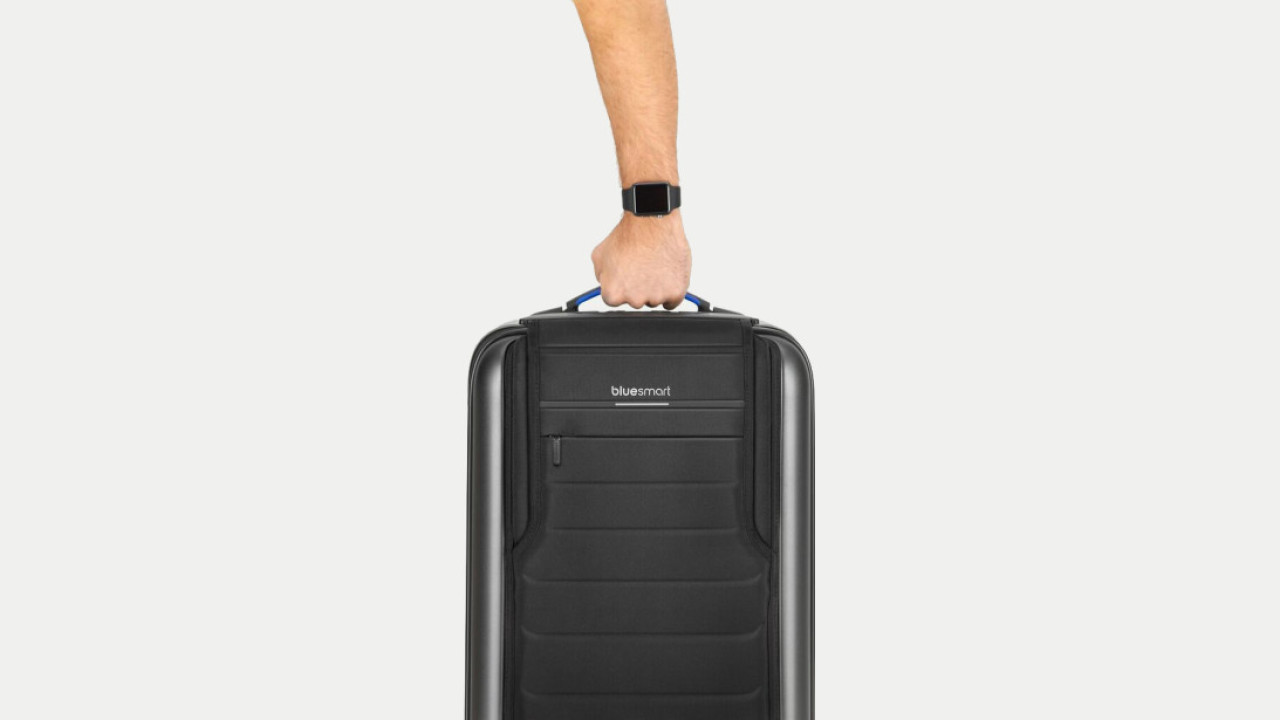 When I first received Bluesmart‘s pitch email to test its smartphone-controlled carry-on luggage, it was as if timing was fate. I was about to embark on a multi-city trip between New York, Montreal, Chicago, Las Vegas, San Francisco, and Ludlow, Vermont in a span of three weeks and it seemed like a great opportunity to test out a travel product in real-life circumstances.

Except things got too real – too quickly.

Bluesmart’s carry-on has many ‘smart’ features, such as the ability to lock your bag from your phone, weigh itself, charge your USB devices and has a built-in location tracker. You do have to charge the bag to ensure it can actually power all these features – in my case, I left it charging overnight the evening before my travels.

My first impression of the bag is that it looks sleek and is extremely lightweight. The rubber grip is a nice, comfortable touch, and I love that it comes with four wheels for easy rolling.

Once I opened the bag, however, I was a little less impressed. At the very top of the bag, there’s a huge battery that eats into the storage capacity. Since I was traveling during the winter, I was also packing thick clothes which barely had any room to fit after dropping in my winter boots.

Bluesmart advertises that you can charge your iPhone up to six times with a single charge, but that’s assuming you don’t plan to use any of its other smart features. In my experience, I was able to plug my phone in and use it simultaneously without losing battery percentage while sitting at the gate, but it didn’t seem to gain any charge either.

Since I was using the bag as a carry-on, I didn’t have much reason to use its location tracker, though when I checked the app it didn’t seem to work.

Its built-in scale, however, worked seamlessly. You start by simply leaving the bag on flat surface, then pick it up when the app prompts you to get a reading of its weight. There’s no display screen on the bag itself, so again, without charging your bag, you won’t be able to use any of the smart features.

My journey began with a trip between New York, Montreal, and Chicago. Security was a breeze with Bluesmart – the laptop compartment at the front of the bag made it an ease to drop everything into bins in under a minute.

It was the leg between Chicago and Las Vegas that made me look like a potential terrorist.

I was heading to Sin City for CES the weekend after New Year’s, and by sheer fate ended up at the airport one and a half hour before my flight was scheduled to leave. With at least 40 people ahead of me in line for security, however, I was glad to have that extra time to slowly make it to the other side of the terminal.

It should be noted that though I’d never call myself a “seasoned” traveler, I do travel often – at least a dozen flights a year, some of which are international. I always wear slip on shoes or boots, clothes with no pockets, and zero jewelry to avoid potential pat downs.

So it was a little unexpected when the security officer stopped me after walking through the body scanner requesting to look inside my bag. The contents were the same as my international leg through Montreal which passed with no problem, so I obliged.

He began sorting through my clothes when I looked up at the X-ray monitor and noticed a square around where the luggage’s battery pack would be. Realizing the potential issue, I explained to the officer what he might have been looking for.

“Can you get it out?” he asked. Unfortunately, it was underneath the lining of the interior, so I couldn’t unless I was willing to cut the bag open and break the plastic box.

At this point a second officer shows up to give me the inevitable pat down, and she starts looking through my luggage. They swab it as part of an Explosives Trace Detection test and the bag alarms.

“Miss, where are you headed?”

“Las Vegas – I’m going to CES and I’m actually reviewing this bag for the event.” I explained the concept of the bag and tried to show them the booklet that came with the luggage. The second officer warns me not to touch the bag while she’s inspecting.

At this point my flight was boarding in 40 minutes, and I asked the officers if I’d make my flight.

“I’d be more concerned about your bag than making the flight right now,” she responded.

And so she took out the entire contents of my bag, patting each section as I stood there mortified that my bras and underwears were laid out for all of Chicago O’Hare to see.

Once the bag was empty, the officer pulled apart a velcro strip at the fold of the bag.

It doesn’t take a TSA officer to know what that looks like.

“Where does this lead to?” the officer asked sternly. I told her I honestly don’t know, but I would assume that it connects to the power supply which enables the sensors in the bag to work. She phones her supervisor to come take a look.

Yes. Me, a solo traveler headed to a crowded place with convention centers hosting one of its biggest events of the year. As the suspicions continue to rack up, I was internally panicking about who to call since my family is in another state and my boyfriend who I was in Chicago with had already left to go back to New York.

At last the supervisor arrives, and I reexplain my situation. He tries yanking at the cords, and orders the team to swab the bag again, focusing on the wires. This time, the test comes back negative, and the officers allow me to repack my bag and go.

I asked for the TSA officers’ feedback on the bag.

“As these things become more popular, I’m sure we’ll get training on how to better look for them,” the first officer who did not want to be named tells me. “But I would suggest to the company that any kind of wiring should be removable so we can properly scan for potential threats.”

With those words, I thanked the officers and ran to my gate. I was on final call.

The latter half of my trip between Vegas, SF and Vermont thankfully did not trigger the security scanner, but I did chat with Bluesmart’s co-founder and Vice President of Design Alejo Verlini about my experience.

“We have about 12,000 people using the luggage right now and it’s definitely a learning curve,” Verlini tells me. “Exposed wiring was definitely not the best solution, ideally, the wires should be completely hidden. We are working to improve this design for sure.”

Aside from the ordeal at ORD, I didn’t mind using Bluesmart’s carry-on. The compartments are well-designed and it’s perfect for quick weekend getaways and road trips.

At $399 a bag, I would hold off on making the purchase until further software and design improvements are made. With it being one of the first products of its kind, the TSA is still getting adjusted to ‘smart’ items making their way through security. I’d also recommend Bluesmart add a TSA explainer for the bag in case this happens to someone else.

Unless you don’t mind being an early adopter who has to school officers on your new toys, I’d wait until these types of products become more commonplace – if you even think you need ‘smart’ luggage in your life at all.