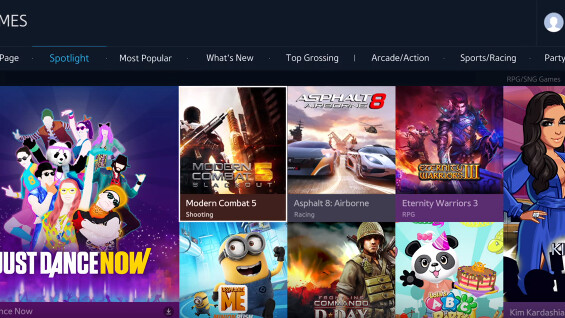 The company says that all of the new features will be showcased for the first time at CES next week.

By making the PlayStation Now service available on the TV, users will be able to play a number of big titles, like ‘Assassin’s Creed III,’ ‘Batman: Arkham Origins,’ and ‘The LEGO Movie’ game, as well as other action, sports, first person shooter and role-playing games, directly on their TV, without compromising on quality.

There are over 300 games on offer on PlayStation Now already and Sony says with the new TV support, it will be adding 100 more, including the likes of ‘BioShock 2’, ‘The Last of Us: Left Behind’ and ‘Mortal Kombat’ to the lineup.

In terms of security, Samsung’s smart TVs have been criticized in the past for being able to potentially spy on owners but the company is introducing a new solution called GAIA security.

The three-layered security solution is built on top of its Tizen-based smart TV platform and Samsung promises that it uses the same encapsulation and isolation methods as its KNOX Android security framework, which is widely regarded as being secure.

Each tier protects a different part of the TV platform – the first one looks after the core services, like passwords, login information, and credit card details.

The second tier protects any information going from or coming to the TV by using encryption. By not having this common feature in previous televisions, Samsung was really lacking. The third level is about minding the hardware by having a key for verifying all personal details on a chip in the actual TV.

It’s unsurprising that Samsung has upped its security game, given that it has also said the newest line of smart TVs will become the central hubs for smart appliances in our homes. SUHD models of Samsung’s Smart TVs will be the control center for smart devices that run on the SmartThings platform that Samsung now owns.

That’s everything from lights and locks to thermostats and speakers. In fact, Samsung says there are over 200 devices that will be compatible to run through its SmartThings platform and controlled via the TVs.