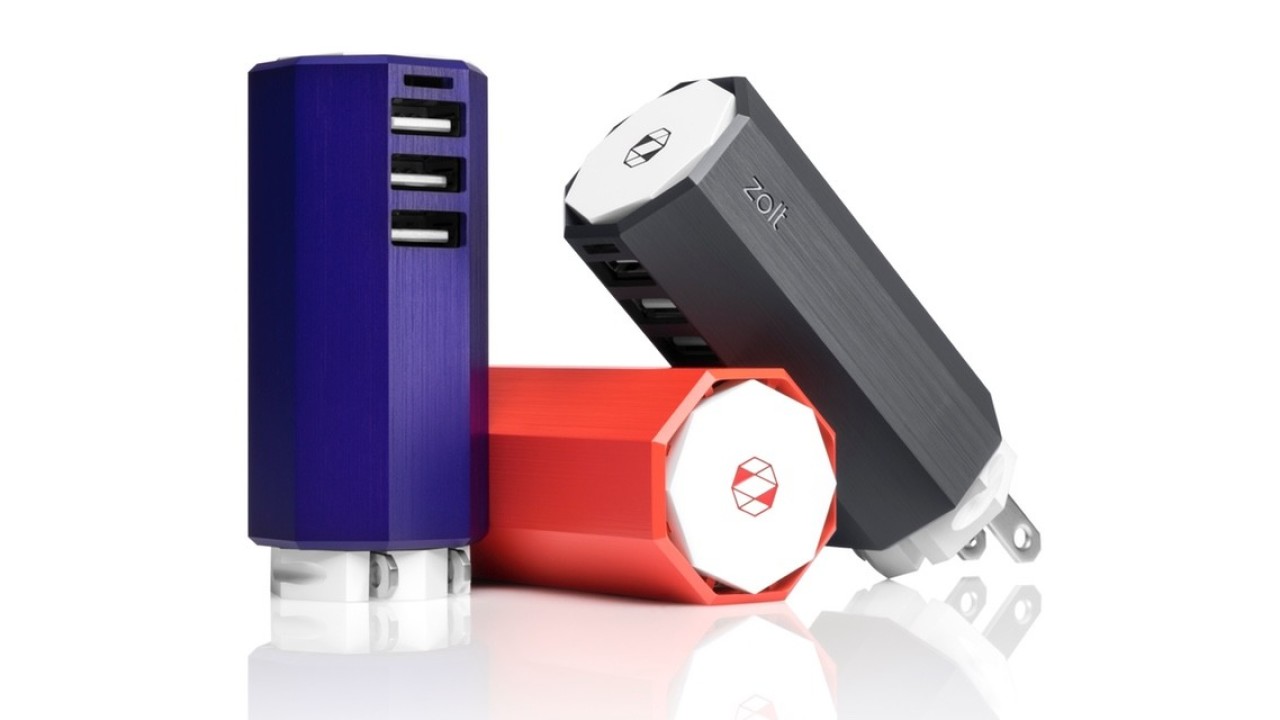 MacBooks are great — the chargers, not so much. Universally lamented, Apple’s own charger could stand a refresh. It probably won’t get one, which is where Zolt comes into play.

The cylindrical charger doesn’t even have a cable tethered to it. Instead, three ports let you charge your MacBook and up to two other devices, if you like.

The prongs also fold under, and the body rotates 90 degrees should you need to move wires from blocking an outlet. Solidly built, Zolt is also a lot of plastic, and the shell feels as though it may shatter if dropped on a hard surface.

When you buy your Zolt, you have the option to buy a MagSafe cable for $19.99. It comes with a standard charging cable and eight tips that fit various PCs. Zolt has a proprietary fitting to make sure you don’t use those tips (or the cable) elsewhere, too.

The tip has three tiny ports that connect with three wires on the PC ends. The cable tip also has a small ring the computer charging ends slip over; it’s secure once you get it on there.

The USB side of Zolt’s cables have a protruding lip, designed to be proprietary to the charger itself. The ‘top’ port on the Zolt charger itself has an inlet for that lip.

Performance was never a problem with Zolt. I ran my MacBook Pro down to zero and charged it back to 100 percent with both my Apple charger and a Zolt while working. It took about 90 minutes with either method.

My MacBook charger gets quite hot, and Zolt mimics that behavior. It also has this very mellow whine that disrupts my otherwise quiet office. I wouldn’t notice the noise if I were in a co-working space or at an event, but it’s there.

The charger does have a ‘smart charging’ technology to regulate output to the devices you’ve plugged into it. There are over-voltage, sort circuit and temperature meters to make sure Zolt remains safe to use for both you and your devices.

For travel, Zolt is a clear winner. Three ports means you need little more than it and a few cables to get you through. If I were traveling with my MacBook Pro, an iPhone and iPad or Apple Watch, I’d be set with Zolt.

Lazier travelers will like that you can simply wind cords around a Zolt without ever unplugging them. As someone that goes to many technology conferences and is on the move a lot during those events, that’s a handy feature.

If you’ve got the newest Retina MacBook, Zolt will still charge it (if you’ve got a USB to USB-C cable), but the company tells me it will just be a touch slower than with Apple’s charger.

At $99, it’s hard to argue against buying a Zolt. It can replace most — if not all — of your existing chargers, and it may be the most essential travel tech accessory I’ve seen in a long time.