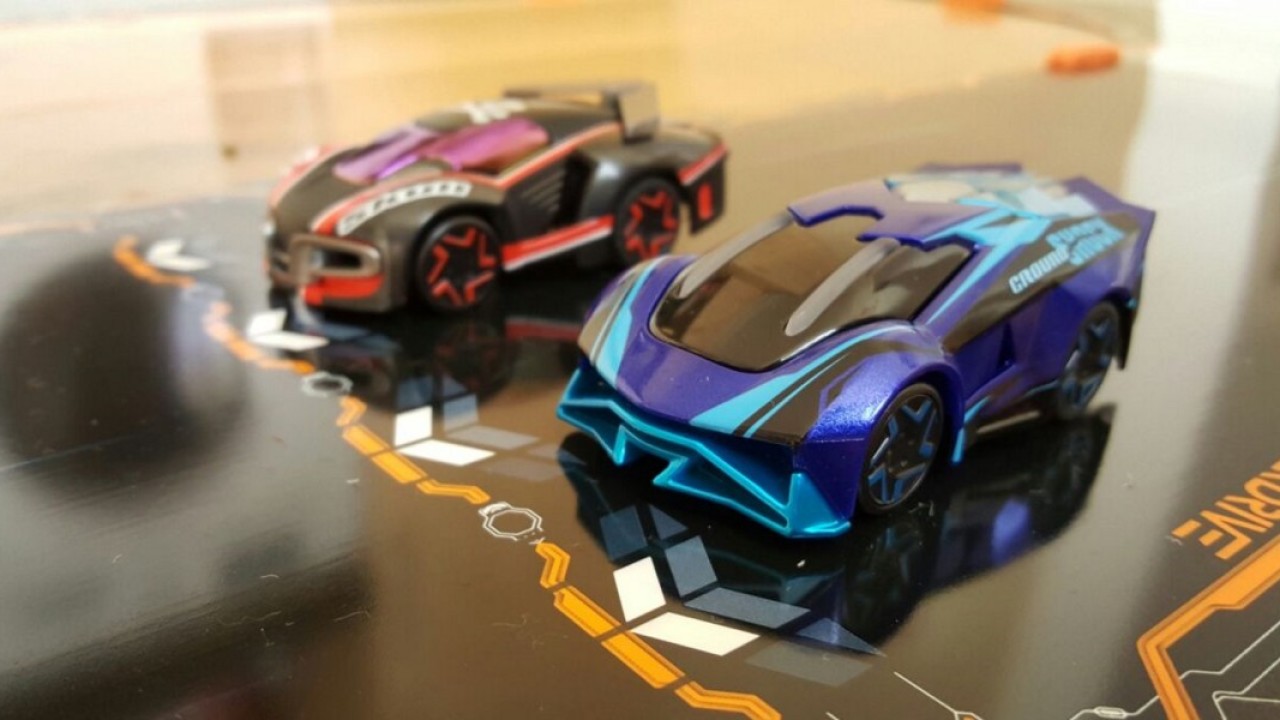 Try as I might, it’s hard to keep up with every single gadget/device/connected toy released, and Anki’s Drive racing game totally passed me by first time around.

However, the company has just released its second robot racing game in the form of Anki Overdrive, which is partially compatible with the existing Drive track and cars.

In a nutshell, it’s like a 21st Century version of Scalextric, but one that turns it into feeling like a hybrid between a video game and a real-world game.

In the Anki Overdrive Starter Kit, there’s a few sections of track (10), two cars and a charging pad for the vehicles.

Opening it up, I had flashbacks to spending hours setting – and then re-configuring – Scalextric sets when I was younger. I’ll be honest, it didn’t make me want to leap straight in.

Thankfully, it’s a whole different system – and it’s exceptionally easy to get up and running in just a few minutes.

To create a track, you simply click the magnetic sections together, and because it doesn’t need any sort of power, it doesn’t need to be plugged into the wall so you can put it wherever you like.

Changing configurations is simply the case of spending a minute or two adjusting the track, and then carrying on with your racing.

You’ll need to charge the cars before you can use them for the first time too, but again, this is a quick process – from flat to fully charged in around 10 minutes, which minimises downtime between rounds.

Once you’re ready to start and have downloaded Anki Overdrive for your Android or iOS device, the app will guide you through the rest of the connection process (and prompt you to switch on Bluetooth, if it isn’t already).

The first time you place the cars on the track during the pre-race set-up, something really pleasing happens: the cars shoot off to scan the track, automatically driving themselves to optimize for your layout. Once that’s done, they both automatically pull up at the Start line, ready to begin the race.

This last bit brought a smile to my face instantly, piquing my excitement to get racing.

The ‘big secret’ (not at all a secret) about Anki Overdrive is that a large part of the driving is automated – your car will happily navigate its own way around the track without your interference at all, but you get to control the speed and can change lanes by tilting your phone from side to side.

At this stage, I was already impressed and having fun – and then the tutorial introduced weapons.

That’s right, you get an array of virtual weapons to help you win in battle and race mode.

Each vehicle also has a few different weapons available to it. Using a ‘tractor beam’ to draw your rival in, followed by a ‘stun’ so you can go whizzing past is as much fun as it sounds, and that was just me playing against the AI. With a group of friends, it’d be even more enjoyable, no doubt.

It was this addition of weapons that really blew me away, instantly creating a unique gaming sensation that I’d not had before. Sure, I’ve always been a (console) gamer and play on my phone but Overdrive instantly paired my nostalgia for Scalextric with modern gaming.

Control of the cars isn’t a completely precise affair, but lane and speed changes happen quickly enough for you to know that you’re in control. Hint: You’ll often need to slow down to maneuver yourself into a position to take down your rivals.

The way in which the modular weapons system works means there’s enough variety to keep you playing, even if you’re on your own. There’s also a tournament mode, as well as one-off races.

To help ensure you don’t get bored, you can buy expansion packs with additional bits of track, different cars, risers to create height and a few other bits and pieces.

The only slight downside of the Overdrive setup that I’ve found so far is that the cars need to scan the track for a couple of laps between each race, which slows things down a little bit if you’re using the same layout for race after race.

You’ll also want to keep your track relatively clean, else the cars will lose their way, start spinning around and go around the track the wrong way. It is sort of entertaining for a short while though.

The future of gaming

I wasn’t expecting to be as impressed with the Anki Overdrive as I am.

With all the talk of VR transforming gaming (and the wider world), it’s assumed that virtual experiences will dominate our future – and they might, but Overdrive has shown me that a hybrid approach can bring another new experience to the table.

It’s a hassle-free, easy to play and a great example of tech delivering a hell of a lot of fun without totally breaking the bank at around $150/£150 for the starter bundle.

Anki Overdrive is going to be on a lot of Christmas lists this year, or should be.