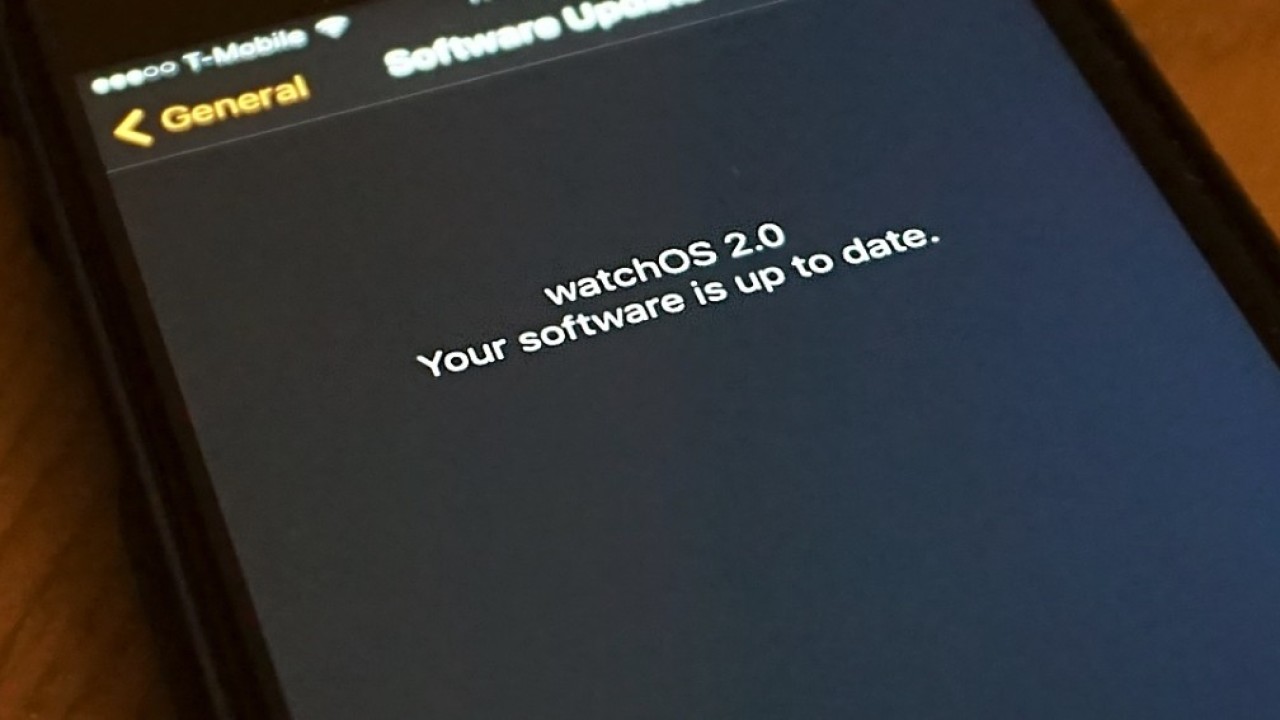 Apple Watch users, watchOS 2 is here. If you’ve not downloaded your new software yet, here’s a primer on what’s new, what’s better and how you’ll be interacting with your new watch.

You can now choose a time-lapse photos for your watch face, taken at various locations across the globe. As you raise your wrist and the watch face activates, the timelapse photo — which is more like a non-looping GIF — plays.

You can also send more colorful drawings with a new color picker, and add a new circle of friends. New animated emoji are also available.

Some watch faces also let you alter the color of text, which match the new watch bands.

While we call existing Apple Watch views “apps,” they aren’t. All you’re getting is a look at info from your iPhone app. Now, Apple Watch apps can be separate from iOS apps.

Complications — those quick-view widgets on your watch face — can now show data from any app. If you’d rather use Carrot Weather than Apple’s native service, that’s going to be possible.

Apps can also run natively on Apple Watch now. Apple says that will mean more powerful experiences, and apps that launch faster because they don’t need to link to your iPhone first.

Apps — native or otherwise — also have access to Apple Watch features like the Haptic Engine, accelerometer and heart rate sensor.

You’ll now be able to tell Siri to do things like ‘start a 20 minute workout,’ or ask for specific directions (‘give me driving directions to home’).

Glances can also be launched via Siri on Apple Watch, and you can also reply to emails or make FaceTime audio calls. If you’ve not set an app up to view as a glance, Siri will just launch the app for you instead.

Apps written specifically for watchOS 2 can now run natively. The first I’m aware of outside of Apple’s Weather and Stocks apps is PCalc, but you’ll still need an iOS counterpart in addition to a native watchOS app. Native apps are available for better performance, not necessarily ‘de-cluttering’ your iPhone.

While on your home screen, rotating the digital crown activates a feature called Time Travel. It’s meant to allow you to see what events you might have coming up (or what happened in the past), but is also handy for getting a glimpse of the weather through your day (or the next).

You can time travel until the end of the next day. Depending on the complications on your watch face, it might be good for catching up on sports scores or other quick-hit bits of information.

Known Wi-Fi networks (those your iPhone has the password for) can now be used by Apple Watch to chat with Siri, make FaceTime audio calls or chat with others using iMessage or Digital Touch.

When your Apple Watch is charging, it can display the time in landscape mode. You can also set alarms, and use the Digital Crown to silence an alarm or the side button to snooze it.

The opt-in feature allows you to require iCloud credentials be entered before you can use the watch.

It’s the same feature you’ll find on iOS devices, and one that has severely reduced iPhone theft. Prior to watchOS 2, a stolen Apple Watch was lost forever. Now, you can lock it down if it’s lost or stolen.

Enabling an “average pace” feature in the ‘Workout’ section of the Apple Watch app on iPhone creates a median pace for your activity level during exercise, which will be saved to iCloud for use in other apps. Apple Watch is also getting tighter calibration for outdoor walks and runs, as well as rowing and outdoor cycling.

You can also mute stand reminders for a full day (great for long car trips).

Third-party fitness apps like Strava and Runtastic are now supported, and have access to Core Motion and the heart rate sensor on Apple Watch. Workouts in your favorite app also count towards your Workout ring and show on the Activity app on iPhone.

Listed above are the key features, but how do they work day-to-day? I’ve been testing the Gold Master beta version of watchOS 2 for a while now, and have put most of these features through their paces.

All told, watchOS 2 feels like the finished product the original watchOS just never was. I’ve always had a great experience with Apple Watch, but there were also lots of things I wished it could do.

Fortunately, watchOS 2 addressed many of my wish list items line-by-line.

Small changes make a difference. The lock-screen keypad is different, and better. When you’re on the apps screen, tapping the digital crown once now takes you directly to the home screen.

While testing third-party native apps wasn’t possible at the time of my review, Weather is astonishingly snappy, now. The spinning circle has just about vanished, and I’m getting weather info immediately.

A common denominator with many of Apple Watch’s new features is a solid Wi-Fi connection.

While Apple Watch doesn’t have its full breadth of capabilities when away from the iPhone, doing things like responding to an iMessage was as seamless and easy as it is when you’re near your iPhone on a cellular connection. It’s still you talking to your watch (which is odd), and choosing to send as a voice message or text — but it works without being tethered to a phone, and that’s pretty cool.

Siri is also solid, and I really like the ability to tell her to start a ten minute outdoor walk (or a similarly quick ‘workout’). Asking her to launch a Glance is handy, and she’ll even open the app when you’ve not set a glance up.

I should say Siri doesn’t seem to be faster, per se. She still takes a few seconds to process requests, and you’ll have to speak clearly into the watch to activate her.

Apple Pay and Wallet are also improved, and you can add retail cards and see them on your Apple Watch. If you liked paying for stuff with a watch, try getting a discount at Target using the Cartwheel app. The cashiers get super confused about scanning your wrist.

When it was announced, many considered Apple Watch too expensive for something that was an accessory device. Now that it’s transitioned beyond its role as an iPhone companion, we’ll likely have to (slowly) reconsider Apple Watch’s role in our lives.

It won’t take the place of your iPhone. The memory inside is still limited, so you won’t be loading a ton of native apps. Apple Watch also relies on Wi-Fi when not tethered, and you probably won’t be comfortable leaving your iPhone at home often.

Still, I can walk down to the cafe without phone anxiety. If my phone is charging, I can reply to messages while watching Parks and Recreation re-runs without grabbing my iPad.

watchOS 2 is exactly what Apple Watch needs — powerful software that takes full advantage of everything Apple has to offer. It’s also the first chance for developers to tap into your wrist-worn hardware on a more personal level, so we can expect more powerful apps in the near future.