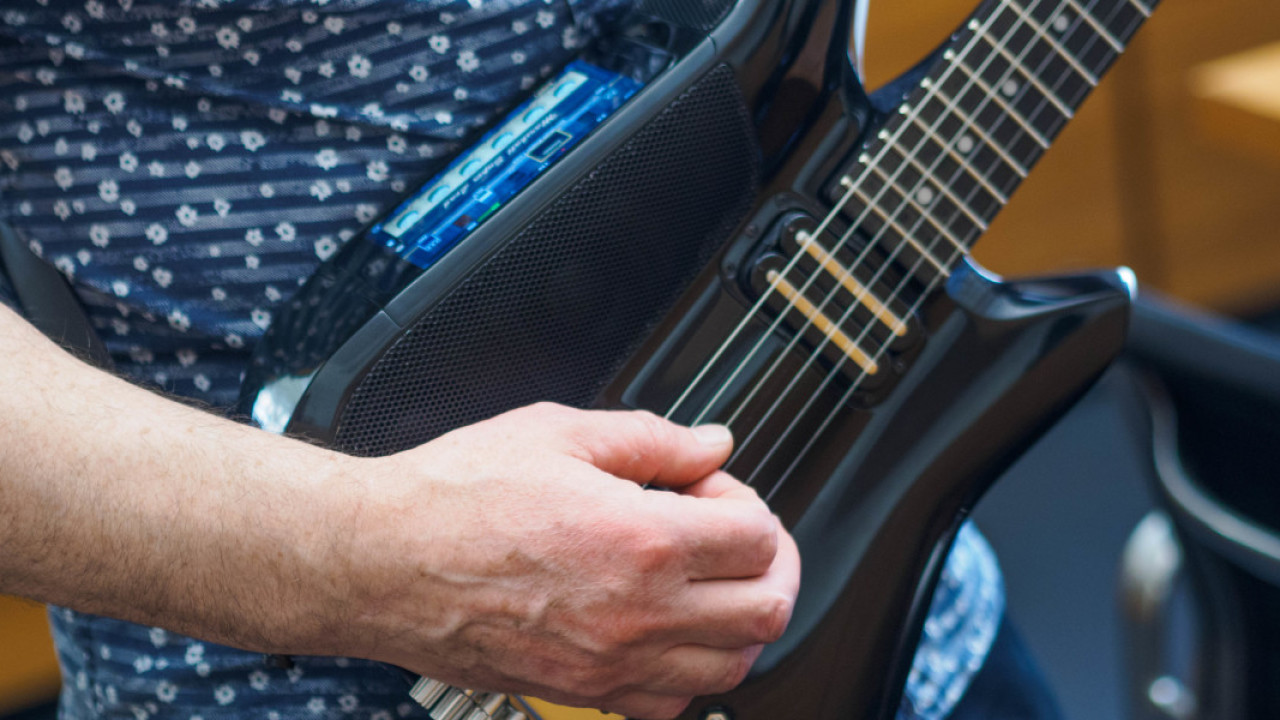 Electric guitars have been rocking our world since at least the ’30s, but they haven’t changed too much since then, generally requiring you to lug a mass of bulky amplifiers and pedals to get the sound you’re looking for.

But what if you could carry all the equipment you need in the guitar itself? That’s what the Fusion Guitar – recently launched on Indiegogo – is trying to achieve with its iPhone-docking instrument.

While I may not be a guitar expert – my mastery extends only to the incredibly difficult E minor chord – I can say it looks and sounds awesome after designer David Auld conducted a demo for me.

You’ve got two 30W full-range speakers and a third mid-range/treble driver embedded into the body, powered by a 20W amplifier and two replaceable 7.8 ohms pickups.

The key feature, however, is the iPhone dock, which is mounted at the top of the guitar to be easily visible and accessible.

It makes the guitar a little thick (though still a lot smaller than an acoustic), but opens up a whole world of possibilities: you could choose from a variety of virtual amp models to imitate the sounds or a physical rig, apply a variety of modulating effects, or wirelessly interface with a Bluetooth foot pedal, and then mix it all on the fly.

Here’s a short demo of how some of the different amp simulators actually sound:

To be clear, these aren’t apps made by Fusion Guitars, but rather existing software like JamUp and GarageBand. Auld told me there was no need for proprietary software with such an ample selection of existing apps.

Standard guitars can access and use these apps already through special hardware, but it’s the convenience that makes the Fusion Guitar so appealing – the dock and amp are already in the guitar, so you don’t need to carry any extra equipment.

Alternatively, you could simply load up some sheet music or guitar tabs  to practice a new song while looking down at the dock. New players can fire up YouTube or one of the myriad of learning apps to learn some of the basics, and the line-out port means you can plug in your headphones and practice with all your effects on without annoying the entire neighborhood.

A microphone jack helps you mix in vocals or other instruments too. If you’ve ever wanted to get started with a guitar, this one definitely looks like a convenient all-in-one solution.

Fusion’s integrated 3,200 mAh battery should also provide up twelve hours of playback on after charging for only one hour. Longevity will vary depending on your volume levels; it’ll last for about four to fix hours on higher settings (read: very loud), which still seems plenty long enough for most jam sessions. You obviously shouldn’t expect it to fill an entire concert hall with a loud crowd, but you can always plug in a full-powered rig if you needed to.

Auld tells me the Fusion Guitar is all about being able to play wherever you want without all the set-up normally involved with electric guitars; just plug in your phone and start playing. It’s hard to argue with him after seeing him effortlessly mix an entire multi-track song in front of me with nothing but the guitar and his phone docked in.

The convenient design ethos extends to other areas too. For example, changing the strings is easier than on a normal guitar using bottom mounted tuner posts (the minimal headstock is basically just decorative). You can then quickly tune the strings using an iPhone app.

It supports iPhone models as far back to the 5 (although the Plus isn’t included in the spec sheet), as well the fifth generation iPod Touch via interchangeable docks. It also cleverly includes a replaceable lightning connector should it ever get damaged or Apple choose to use another type of connection.

The Fusion Guitar has already nearly reached its $35,000 flexible funding goal with 27 days to go. It’ll retail for $799 when it hits the stores (estimated Q1 2016) but early Indiegogo backers can buy it for as low as $399. Head on over to the campaign page if you’re interested or just want to learn more.