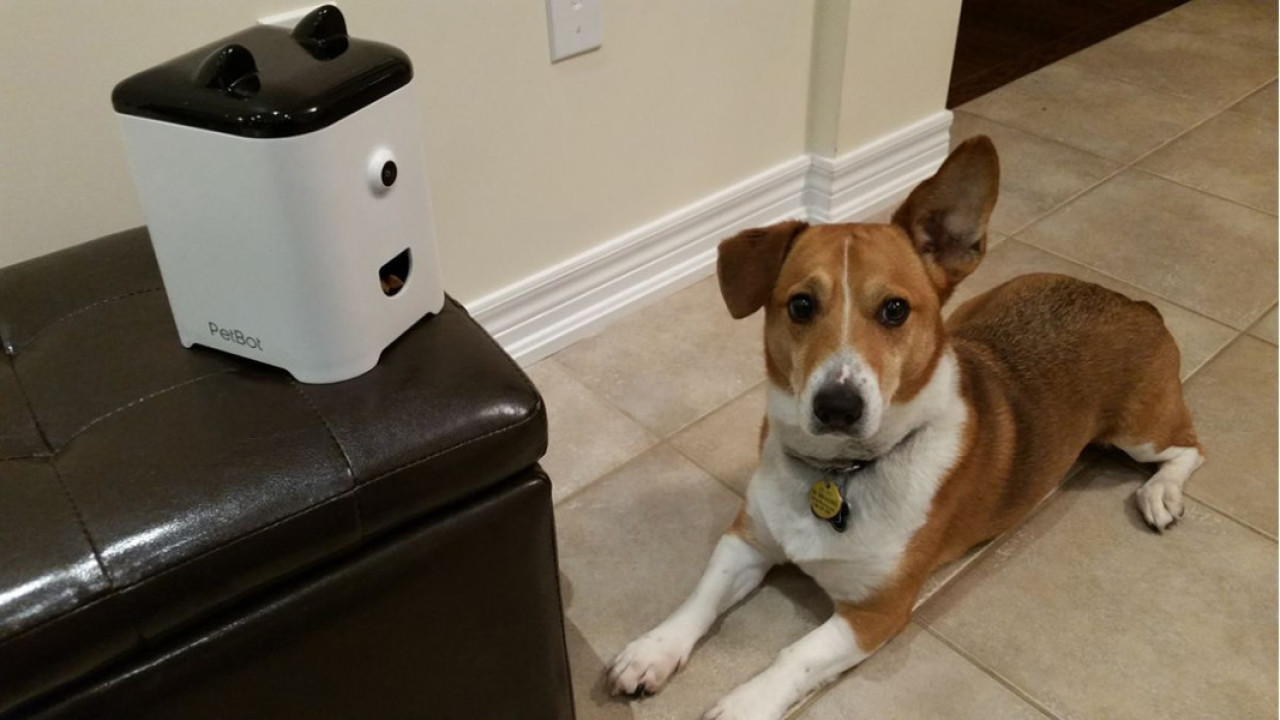 How does it feel to be the center of the universe? Don’t know? If you’re a pet guardian, that’s exactly what you are, at least as far as your precious animal companion is concerned. When you’re away, they pine for your return (even cats).

With the Internet of Things becoming more thoroughly intertwined with pet care, a new device called PetBot, is being developed that combines intelligent audio and visual input to let Fluffy or Fido choose when and how to communicate with you — and even send you selfies.

PetBot, which launches a crowdsharing campaign on Indiegogo today, seeks $80,000 in funding for a connected device that lets you and your pet view, interact and communicate with each other throughout your busy day. No longer will you have to suffer through meetings wondering if your dog is lonely or your cat is crying.

PetBot not only lets you observe your friend’s activities, but employs artificial (petificial) intelligence — animal face recognition and  bark recognition to alert you when something’s up at home. It lets you communicate by voice, have your pet send you selfies and even dispense treats.

“PetBot is the very first smart pet device that allows your pet to contact you,” Jason Yu, PetBot’s co-founder, told TNW.  “We’ve invented pet recognition — a brand new thing. It leverages “petificial” intelligence — AI that can recognize the face of your pet, take a selfie and send the owners a short clip of their pet when they have to be away.”

Place PetBot anywhere in the house and it will identify your dog or cat when they are in the camera’s view. It will then play an audio clip of a sound, or your voice, to entice your friend to come closer to it.

The device features “bark recognition” which recognizes and notifies you of sounds from your dog or cat, letting you stay on top of their training and health care. For example, it can help identify and reduce separation anxiety through your pet’s barking patterns.

“Bark detection lets you be the first to know if your dog is barking or cats are meowing, indicating that maybe something is happening at home and you should check it out,” Yu said.

The treat dispenser is designed to reinforce training while AI features are being improved to interpret behaviors such as if the dog is lying down or the cat is scratching the furniture,” Yu said. “We envision it as motivating, training and mental stimulation exercises and reinforcement for good behavior.”

Integrated Bluetooth tech can connect PetBot to existing wearables such as electronic tags, collars and trackers and upload it to PetBot’s Pet Care Hub, now under development, which will automatically give pet owners additional information.

Other neat extras include the ability to upload pre-recorded audio to ensure pets hear consistent sounds every time. This is especially useful for training.

Yu says PetBot prototypes are also being tested in a network of animal shelters and rescues in Canada to formulate ways the device can help make shelter animals more adoptable — by making cats more social and dogs less anxious. To ease the stressful environment of the shelter, PetBot even has a nature sound that plays at intervals — wind, chirping birds — to simulate a natural and relaxing environment for the cats and dogs after hours when the shelter is closed.