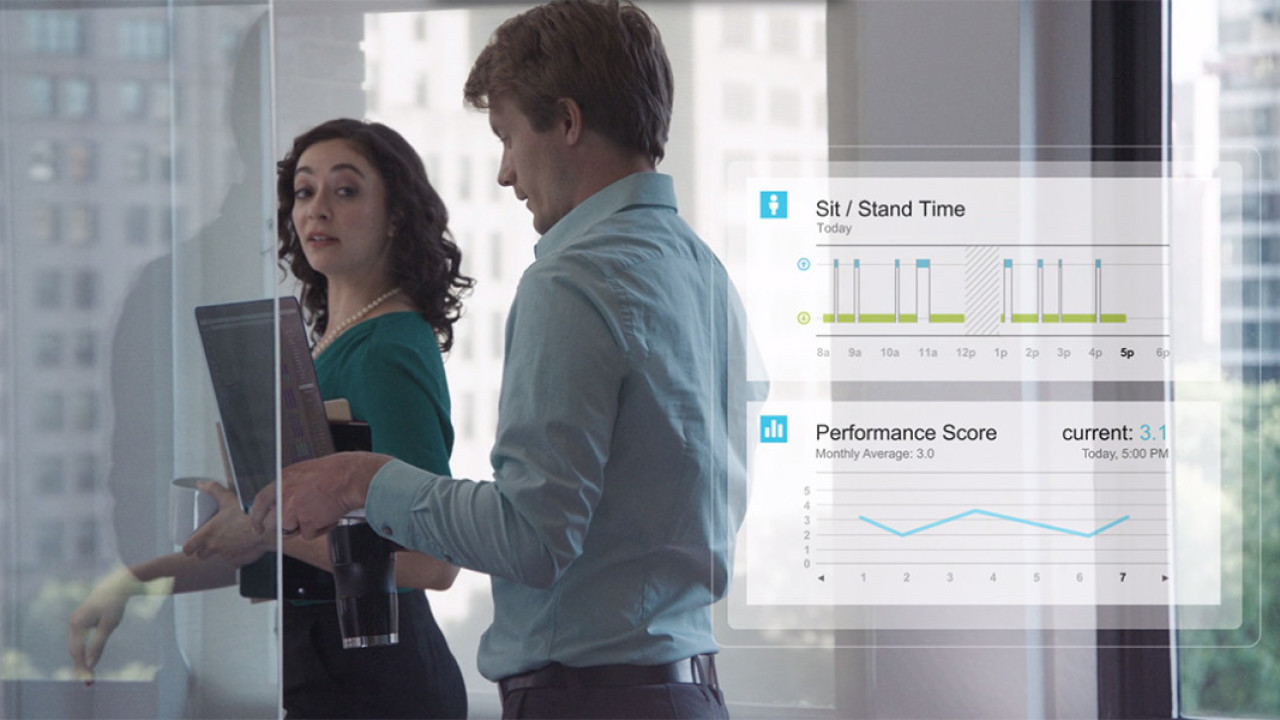 If you sit at your desk all day working hard, that may please the boss, but it’s probably not doing you any good — not the work part, but the sitting part. Sitting down all day is detrimental to both mind and body, but a new workplace device will be hitting the mass market soon that seeks to solve that problem.

Humanscale, which has developed a sit-stand workstation that gives people the flexibility to work standing up at various intervals, has incorporated Tome Software‘s OfficeIQ hardware/software combo to not only encourage the desk-bound to spend some time standing up while working, but to track the positive effects of such movement on health and productivity.

The technology creates a connected workstation that links to third-party iOS and Android apps and measures health and wellness information such as calories, while giving users real-time feedback.

OfficeIQ’s inventor Jake Sigal, CEO of Tome Software, joined a panel discussion hosted by Metropolis Magazine on Wednesday night to discuss how his enterprise product for the design community hopes to boost worker health and well being.

Tome has partnered with Humanscale to create a product that would provide the total sit-stand desk package complete with analytical software. The product, which debuted at CES last January, has been in beta tests since then and is set for mass rollout soon.

“OfficeIQ is around health and wellness; it’s about being active,” Sigal told the audience. The device — a software and sensor around the size of a deck of cards — attaches to the underside of Humanscale’s Float or Quickstand sit-stand desks. The USB-powered device tracks the position of the desk (up or down) and whether the desk is occupied. That data can be downloaded into the individual user’s mobile phone so you can synchronize calorie count with your favorite fitness or weight loss apps.

Whereas users can track personal information, employers only get aggregated data for an office or department via a bluetooth wireless gateway hub with a range of 200 feet. Employers see overall utilization rates with a future goal of sharing the aggregated information with health care companies for corporate welfare initiative or to save money on health premiums.

Employees need the ability, motivation and the trigger to start changing their sedentary ways, Sigal said. The trigger is client software on the computer that will pop up to remind people who have been sitting too long to get on their feet.

TNW sat down with Jake Sigal for a few minutes to get an in-depth view of what OfficeIQ can do for desk-bound employees. While it is targeted to the enterprise for the moment with various pilot rollouts currently underway, mass distribution is a few months off, he said.

Sigal is also thinking about how home office folks may be able to use this product in the future.