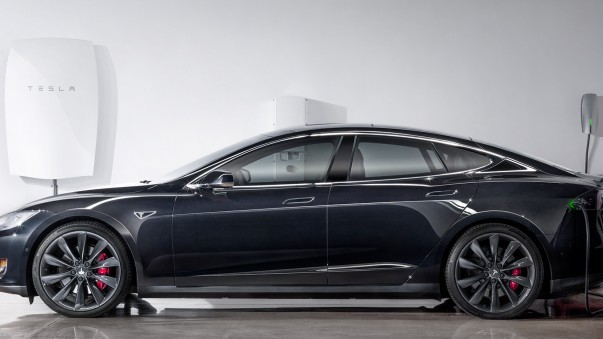 We knew it was coming. Tesla founder and CEO Elon Musk teased their arrival in a tweet earlier this week…

For the future to be good, we need electric transport, solar power and (of course) … pic.twitter.com/8mwVWukQDL

The home model is called the Tesla Powerwall. It’s a rechargeable lithium-ion battery designed to increase capacity for homes with solar panels, store energy and act as backup power. It can be mounted in your garage or to an outside wall and hooks into the local grid.

The idea is that the battery will save owners money by charging during periods of low electricity demand when rates are higher, then providing power during expensive, high-demand times.

It’ll also store solar energy that isn’t used at the time it’s generated and provide backup power in the event of an outage. It’s internet-connected to communicate with Tesla Energy to monitor usage.

The Powerwall is available in two configurations – $3,500 10kWh (optimized for use as a backup system) and $3,000 7kWh (geared towards daily use). Tesla will start shipping both models to installers in late summer. Tesla fans in the US can order the Powerwall online now.

The Powerpack, the business version, won’t be available until later this year, with the company starting to really push it in 2016. It uses 100kWh battery blocks to provide on-demand power distribution and manage peak demand.

Tesla Energy also plans to extend to the Germany and Australia by the end of 2015.

Tesla has been supplying home energy storage systems using Tesla batteries to SolarCity, the home solar panel provider, for some time. It has installed more than 450 of the backup power systems this year.

Musk conceived of the concept for SolarCity and serves as its chairman. The co-founders, brother Peter and Lydon Rive, are his cousins.

Businesses including Amazon, Target, Walmart and Cargill are already testing the Powerpack system.

With supplies of lithium-ion batteries already too constrained to completely serve Tesla’s car needs, it’s imperative that the company gets its $5 billion ‘gigafactory’ in Nevada up and running to begin making the new batteries.

Read next: How to Be As Great As Elon Musk: Advice from His Ex-wife