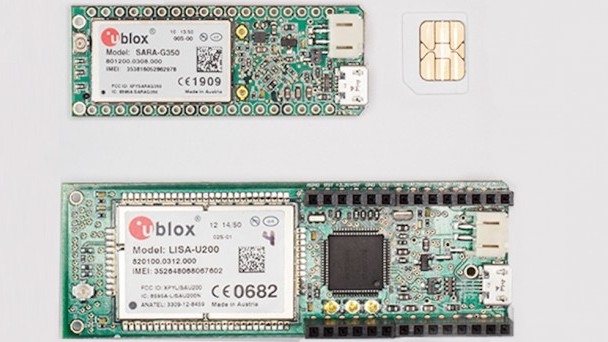 We saw one solution – the Spark Electron – last month. Now Chicago-based Konekt, another maker of IoT toolkits has revealed its own take – the Konekt Dash.

As has become par for the course in the hardware space, the company has launched a Kickstarter campaign to promote and fund the device. It’s set a very manageable target of $10,000 to produce the consumer Konekt Dash and more secure enterprise-level Konekt Dash Pro models. The campaign ends in 36 days.

Konekt’s original toolkit includes a SIM card and the services required to build cellular IoT projects, but the Dash goes further by providing a circuit board with integrated battery management. That means developers just need to add sensors and code to create products that work anywhere with mobile service.

The company suggests the consumer version could be used to build products such as smartphone-controlled home security systems and bicycle trackers.

The Dash Pro, which features end-to-end 256-bit PSK encryption and automatic over-the-air key exchange, is designed to be used for more sensitive projects such as ATM security, industrial monitoring and healthcare applications.

Both models hook up with Konekt’s cloud platform which allows devices built with them to communicate with the internet or each other.

Interestingly, the Kickstarter rewards include peripherals that developers will need to implement their projects. At the $5 level you’ll get the global SIM card, which includes a free six month data plan (1MB per month or up to 6MB in total). A pledge of $79 will get you the Dash bundled with the Raspberry Pi B2, a Huawei E303 USB Modem and the SIM.

Contributors can also add one or more Shields at any reward level. They include a Solar Shield to power devices, a Relay Shield for switching external devices on and off, and an awkwardly-named Shield Shield for integrating Arduino into your project. As well as the tier with a Raspberry Pi included, the company’s offering bundles with Arduino and Beagleboard hardware.

Konekt says it will start shipping its global SIM cards at the end of the Kickstarter campaign in May – providing it meets its funding goal – with SIMs packaged with third-party hardware going out the same month. The Dash and Dash Pro will ship later in the summer.

“I was in Singapore trying to build GPRS printers for Foodpanda, which would print out customer orders without having to use Wi-Fi. We discovered how hard it was to obtain those cellular data plans. We sought to solve that problem. We can provide a global SIM card that will work with any hardware, to provide super-affordable access in over 100 countries.”

While the company is launching the Dash and Dash Pro on Kickstarter, it also recently raised $1.3 million from a range of US investors.

Forgan points to the recent questions around SIM security, following revelations by Edward Snowden, when talking about the Dash Pro’s security features:

“Our CTO [Pat Wilbur] has a PhD in Computer Science with a focus on security and virtualization so we’re pretty focused on this stuff. The Dash Pro will have end-to-end SSL security, that includes handling key exchange. With some other encrypted devices, if you pre-load the key manually, you’re secure, but if that’s compromised, you have no way of changing it in a secure fashion. With Dash Pro, you can do that in the event a device is comprised, through the cellular connectivity, without having to use our network.”

With the growing interest in developing connected devices, more options for individual makers and bigger companies can only be a good thing. Konekt’s approach of connecting with as many other hardware platforms as possible is definitely a compelling one.