Sony didn’t announce a flagship phone this year at Mobile World Congress, but instead they did come packing a high-end tablet – the Xperia Z4. I got a chance to try out the tablet and see how it performs.

At 6.1mm thick, and only 389 grams, the Z4 is a direct competitor with Apple’s iPad Air 2, and it can certainly hold its own in the stats stake. The design is true to the Xperia range but the hard edges have become rounded and the thinness of the Z4 makes it feel less industrial than its predecessor, the Z2.

The Z4 runs Android 5.0 Lollipop and features a 2GHz Qualcomm Snapdragon 810, 64-bit octa-core processor and 3GB of RAM. It’s a powerful device and during my use, navigation was very smooth.

Sony has also cut back on the number of apps that will be pre-loaded on the device when you buy it, which is a nice, considerate touch. It comes with 32GB (27GB out of the box) internal storage and there’s a microSD slot that takes cards up to 128GB.

What struck me about the new tablet most was its suitability as an entertainment device; Sony has really focused on making this a multimedia device. The 10.1-inch screen has a resolution of 2560 x 1600 pixels, making the images appear sharp and clear. It’s difficult to say if the image quality would be compromised outdoors though when testing it under the bright lights of the auditorium at MWC.

Sony has incorporated it’s surround sound audio effect and noise cancellation, which work with any headphones.

I actually found that the sound through the tablets speakers was good, but not great and nothing compared to when you have headphones plugged in. The true surround sound effect is very impressive and something I will probably notice is missing from other devices going forward now that I have experienced it. 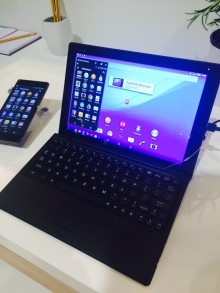 Sony has made this tablet functional for business as well. Microsoft Office for Android is pre-installed, and there is also a keyboard attachment available separately.

And whether you are using it for business or leisure, Sony promises the massive 6,000 mAh battery will deliver 17 hours of video playback.

The camera stands out less. While the sound and the screen and the functionality overall is impressive, the main camera is still 8.1 megapixels. The front facing camera is 5.1 megapixels so that is a consolation, and there are countless augmented-reality effects built in to the camera as well. These seemed very gimicky to me personally.

Sony has maintained its waterproof standard with the Z4 which is definitely a unique selling point. There will be a WiFi-only and an LTE version of the tablet, but Sony has yet to confirm pricing or a release date.

All in all, the Z4 is probably the best Android tablet available, but more so for media consumption than anything else. I can’t shake the feeling that it is just the best of a not very good lot. The competition on the Android market for tablets isn’t quite there and if Sony goes in with a high price point above the entry level iPad Air 2, I think it will lose out.