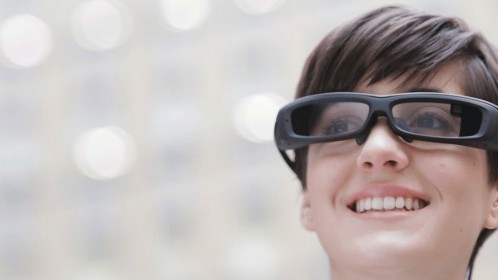 As Google begins working on a commercial version of its heads-up display wearable, Sony is stepping things up in double time, with the launch of its SmartEyeglass Developer Edition SED-E1 augmented reality glasses.

The device will be available in 10 countries this March, and pre-orders have already opened in the UK and Germany at $840 apiece.

The bulky looking binocular display eyewear weighs about 2.7 oz (77g) and manages to superimpose monochrome text, symbols and images in your field of vision. This developer edition comes with a controller that features a speaker, mic, NFC and touch sensor for controlling the display.

Sony has also released a software development kit (SDK) for developers to tinker with and also has a host app on Google Play, which brings apps to the SmartEyeglass for enabling voice control and accessing Twitter, Facebook, Gmail, RSS and calendars.

As with the company’s clip-on heads-up display, this pair looks far too clunky and conspicuous to wear in public. Hopefully, it’ll get sanded down and streamlined before it’s launched for consumers.