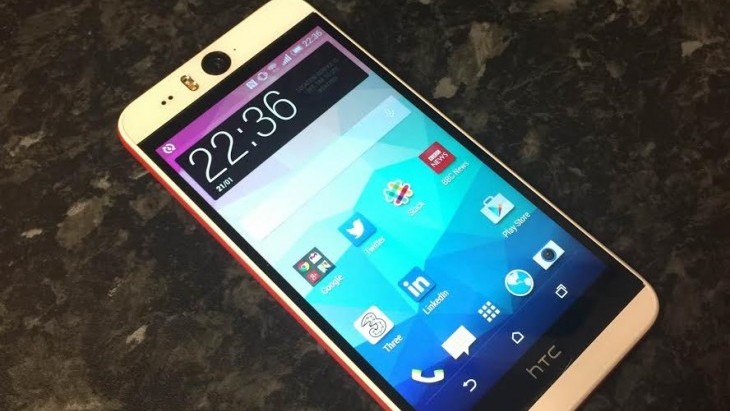 HTC has a history of creating gimmicky products, with its 2011 Facebook phone and only tablet, the Flyer, taking a particular kicking.

The Desire Eye, which features a 13MP front-facing camera and a dual-LED flash that sits next to it, would appear to be yet another gimmick. What HTC has done, for better or worse, is try to create the ultimate selfie phone.

I spent some time with the device to see how it fared.

In appearance, the Desire Eye is no One M8. It’s not made from metal and sits in the middle of HTC’s smartphone portfolio. However, its two-tone plastic finish is far from ugly and it’s solid and easy to grip. I found the finish to be less tacky than the Galaxy S5 and Note 4.

The most peculiar thing about the Desire Eye’s appearance is its large front-facing camera.

Surprisingly, though, it isn’t distracting and works well. What’s also nice is the fact that the phone’s speakers have been placed cleanly at either end of its display. At first glance, it would seem there aren’t any at all. But there are, if you look carefully.

The Desire Eye comes packed with a 5.2-inch (1080 x 1920 pixels) display, with a density of 424 pixels per inch (PPI). This is virtually the same as HTC’s flagship One M8, though that manages a slightly higher pixel density of 441 PPI.

Colors are sharp and wide-ranged, with darks, in particular, standing out. Like the majority of smartphones, though, colors aren’t as clear when exposed to daylight. However, this isn’t a major issue, and you can still enjoy your favorite shows and movies while on the go.

Of course, there are bigger handsets if you’re into your videos and movies. The Note 4 is respectable in this department, offering a 5.7-inch display.

The Desire Eye runs Android KitKat with HTC’s Sense 6 UI atop. Sense has to be one of the simplest Android UIs out there, unlike Samsung’s TouchWiz, which is cluttered with superfluous animations and functions. Here, there’s a sense of fluency that makes it easy to use and good to look at.

What’s particularly useful is the BlinkFeed function. Situated on the phone’s homescreen, it provides you with a list of content you’re interested in – from newspaper reports to social media updates.

Another nifty feature is HTC’s Do Not Disturb Mode, which lets you disable notifications at certain times of the day. If you’re an iOS user, you may have noticed that this is the same name as Apple’s variant. They’re both good and get the job done.

There’s full access to the Google Play Store, too, as you’d expect.

Sporting a quad-core Snapdragon 801 processor, the Desire Eye is well-equipped. It’s not up to the standard of the Snapdragon 805, but it’s still powerful enough to provide you with a smooth performance and can handle demanding games like Asphalt 8.

I’d put it in the same league as handsets like the Sony Xperia Z3. There’s also 2GB of RAM and 16GB of internal storage on offer, which can be expanded with an additional up to 128GB via the microSD card slot.

In reality, it’s possible to be taken into the next day without any problems, but this will depend on the user; performance wasn’t compromised after a typical day of tweeting and reading emails. It was cut short after a few hours of video, though.

The Desire Eye has two 13-megapixel cameras – one on the front and one on the back. This in itself is interesting, because it’s the one of the largest front-facing cameras on any phone on the market. Nokia’s Lumia 735, sporting a 5-megapixel front camera, is probably its closest competitor.

There’s also a dual-LED flash on the front, which means you get to take selfies in the day as well as at night. The only thing different with the front-facer is that it has a smaller aperture.

A selfie from a selfie phone

Thanks to a dedicated shutter button, you won’t have a problem taking photos, and there’s a fast shutter speed. You won’t be disappointed with the overall quality, either, as photos look sharp and colorful. What is worth noting, however, is that images taken in the dark lack detail slightly, and the dual-LED can make photos look washed out. This isn’t a problem you get with the iPhone’s dual-LED rear flash, but there isn’t a flash on the front.

This is one of the most selfie-obsessed smartphones out there, so if you’re vain, you needn’t look any further.

If you’re not into your selfies, you may find it inconvenient to have a huge front-facing camera slapped in front of you. That said, the Desire Eye is certainly capable as an all-rounder, with an elegant and strong design, a fast processor and a battery that can get you through the day. Still, you may want to consider the One M8 as well. It’s similar in spec, but its metal body provides an altogether more refined look.

The HTC Desire Eye is available to buy online from around £300 (~ $457) or on a range of contracts, variable by operator and retailer.