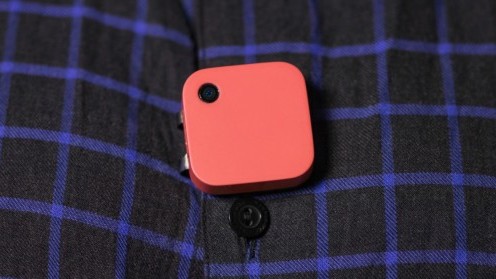 Sweden’s Narrative has today released details of version two of its Clip wearable camera, ahead of CES.

Like the previous version, the Clip 2 is designed to be worn as you go about every day life. It takes a photograph every 30 seconds and, once uploaded to Narrative’s servers, these images are assembled into ‘moments’ that capture the most visually interesting parts of your day.

One big problem with the original Clip was its reliance on being connected to a computer to adjust settings and upload photos. With this in mind, a big boon with version 2 is Wi-Fi sync and Bluetooth connectivity .

The device can automatically log into one assigned Wi-Fi network whenever it’s in range, uploading images automatically. While you’re on the go, you can view recently taken photos and adjust settings from your phone over Bluetooth.

Additionally, the sensor has been upgraded from 5 megapixels to 8 megapixels, and there’s a new 90-degree lens, promising  improved light sensitivity in low light conditions. There’s also a new modular clip designed to allow more attachment options, such as on a necklace or pinned to a shirt.

On the software side, Narrative’s iOS, Android and desktop Web apps will be updated with a public timeline, so you can share your best images with other users.

I was impressed when I reviewed the original version of the Clip. Its ability to capture life in a unique way had me hooked for a few months, and even got me in trouble at an airport. Version 2’s reduced reliance on hooking up to a computer should make this a more compelling device. As with most wearable devices, the friction around ‘charge and sync’ relegated the original to staying unworn in my bag after a while.

There’s no release date set for the Narrative Clip 2 yet, but it will cost $199 at launch, as opposed to the original device’s current $149 price point. Color options at launch will be black, white and red.