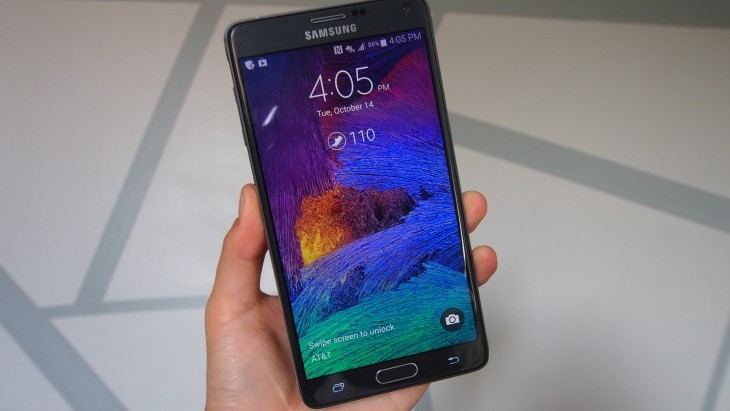 Lines are quickly blurring between what you’d consider a smartphone and a tablet, but that doesn’t stop Samsung from releasing more devices in an array of screen sizes. With the success of the Galaxy Note line, however, it’s only natural for the company to continue pushing out its most successful “phablet” annually – this time with subtle, underrated improvements in nearly every aspect.

Here are my thoughts on the Samsung Galaxy Note 4 after a week of living large.

The physical upgrades on the Galaxy Note 4 follows along the lines of the Galaxy S family – with a new aluminum frame that adds a much better grip than the Note 3’s shiny plastic edges. Off the bat, the Note 4 feels more luxurious, all while continuing to sport the faux-leather back found on its previous model.

Although the Note 4’s screen remains at 5.7-inch, it is now equipped with Quad HD Super AMOLED display running on a 2.7GHz quadcore processor, making the visual experience brighter, richer and smoother. It’s a good call on Samsung’s part to keep the device at the same size, but concentrate on higher pixel density at 515 pixel per inch vs. the iPhone 6’s 401 ppi.

The main navigation bar on the bottom looks mostly the same, except the Menu button has been replaced with the Previously Used apps button so you can quickly bring up apps for multi-tasking. The Home button also includes a fingerprint scanner which you can use to unlock the phone by swiping down instead of typing in your password, but I didn’t find this to be a quicker route than your average pattern unlock. Still nice to have that added security system, however.

You’ll find the S Pen neatly tucked into the lower right corner. Again, always a bit awkward for a left-hander to use a device clearly designed for the right-handed world since I have to move my palm to get to the pen or switch hands back and forth, but otherwise the design is discreet and when I’m not using the pen, I hardly realize it’s even there.

On the back, you’ll find a 16-megapixel camera. Just below it is the new optical heart rate sensor that measures vitals with a press of your finger. The sensor also doubles as a camera shutter while you’re in selfie mode, but more on that later.

Just like all other Galaxy devices, the Note 4 runs on Samsung’s TouchWiz interface built on Android KitKat 4.4. Depending on your carrier, the phone will come with some pre-loaded apps which you can easily dump into a folder to avoid scrolling through carrier-branded applications you’ll never use.

Samsung has also built in a Galaxy Apps feature which contains all the apps which would have otherwise been pre-loaded, but now allows the user to decide which they actually want to download. A small but highly-appreciated addition to making TouchWiz less clunky to use.

Just like its previous iteration, the Note 4 comes with a few motion gestures to perform actions based on context. The one I found most useful was the Direct Call gesture, which will dial the number of the contact currently on your screen just by raising the phone up to your ear. Otherwise, most of the gestures, such as hovering your hand on the screen to mute incoming calls or swiping your palm to screengrab, seem more like ‘nice to have’s than ‘must-have’s.

Samsung has also updated its Multi Window feature, allowing you to drag and drop multiple apps and use them simultaneously. If you have Multi Window turned on, you can now hold the return button to bring up a shortcut of your favorite apps and drag them to the screen to open them in split-screen or pop-up mode.

Call quality and signal strength also worked quite well. My review unit came with an AT&T 4G LTE plan – when I took it on a weekend trip outside of New York City, it managed to retain a few bars of LTE in an isolated region whereas my personal HTC One found no service.

Although Samsung said the Note 4’s battery life will remain the same as the Note 3’s despite the hardware upgrades, the latest model does come with a few power saving modes to keep the device running as long as possible. In addition to the regular power saving mode, the Note 4 now offers “Ultra Power Saving” which puts the phone in grayscale mode, restricts mobile data and other connectivity features and stops background apps from accessing data. For example, at 83 percent, the Note 4 calculates its survival at 14.8 days of standby time – which is useful for times when you just really need to have a working phone for emergencies.

In my brief time with the Note 4, I was able to go through a full day of regular use (some Google Maps, Spotify streaming, photo-taking and editing and Web surfing) and still have about 20 percent of battery by bedtime. This number also did not deplete significantly when I forgot to charge it overnight, but if you do need a quick boost, Samsung’s “Adaptive Fast Charging” lets you go from zero to 50 percent in about 30 minutes.

And yes, despite the leather back, the case is removable should you want to replace the physical battery.

The Samsung Galaxy line of smartphone offers some of the best cameras on an Android, and the Note 4 is no different. In addition to the 16 MP rear camera, it’s also got a 3.7 MP front facer along with a slew of selfie modes. 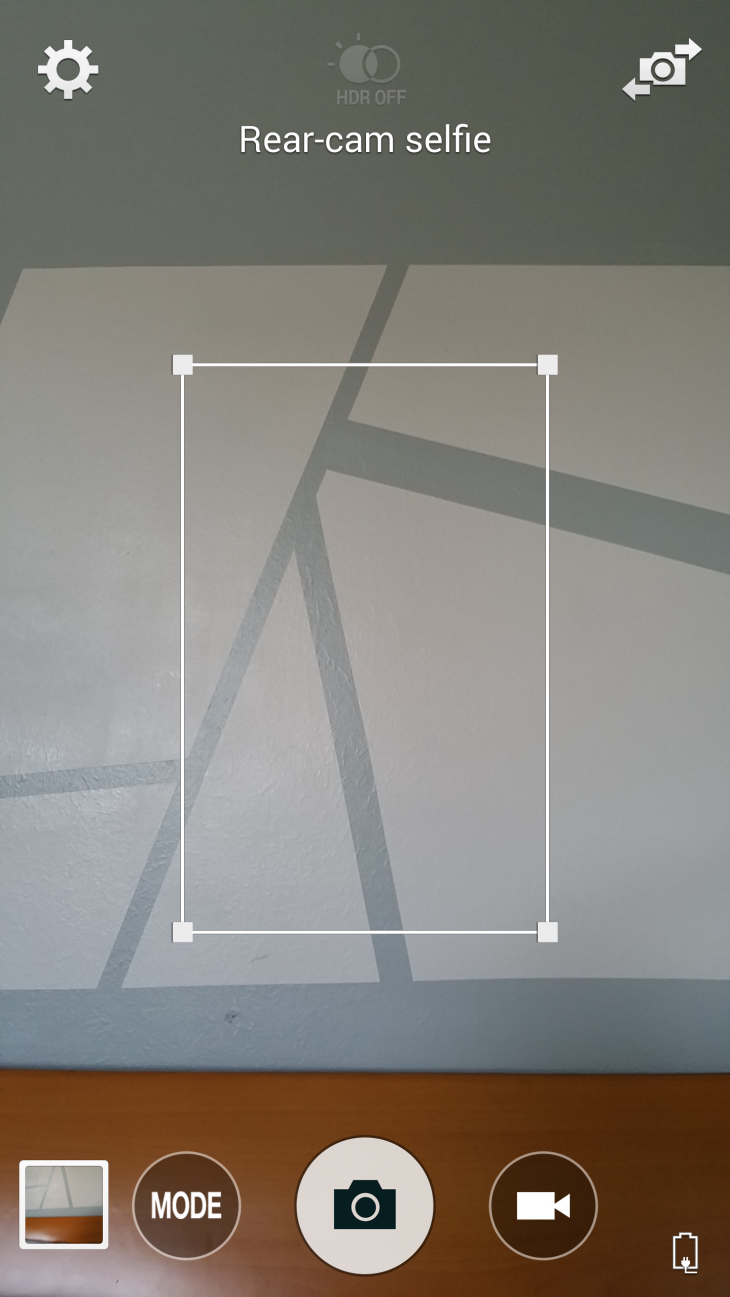 You can use the “Rear-cam selfie” mode to set the parameters of where you anticipate your face to be, and turn that baby around for 16 megapixels of self-indulgent goodness. Once the Note 4 detects your face, it will make a pleasant chime and beep to count down to the shutter.

Unfortunately, when I attempted to use this, I couldn’t get the timing right and ended up with several photos of me blinking, but you get the idea of how this supposedly works.

Alternatively, if you want to use the regular selfie cam, instead of pressing the shutter on your screen, you can tap the heart rate sensor in the back to snap your photo. You can even opt for a wide-angle selfie to capture larger portions of the room. This gives you the flexibility of better grip and angling, or as a Samsung rep puts it during our demo, “we take selfies really seriously.”

No surprise, the Note 4’s camera remains one of the most superior on the Android market. Pictures are sharp and bright, with significant details and minimal graining under low lights.

I liked using the S Pen and its Air Command feature, which brings up shortcuts for things you could do with the Pen such as copy words, take a screenshot or scribble notes on the current screen. However, I didn’t find the stylus to be all that accurate in sensing pressure and weight, and there is a slight delay between writing and seeing it appear on the screen that felt a bit underwhelming under all these technical upgrades.

S Health and S Voice also worked as advertised, but I did not find S Voice to be all that different from Google Now, and S Health has good intentions but the amount of tapping involved didn’t feel all that intuitive and seamless. With all the wearables out on the market, you’d hope Samsung would be able to fully utilize, at the very least, the Note 4’s accelerometer to recognize when you are running, walking or driving.

Alas, all these functions still need manual input, which doesn’t take that much work – but enough for me to not feel encouraged to use it frequently.

Fans of the Note phablets will enjoy the nice improvements made on the Note 4. Although it may not look like a big leap from its previous model, Samsung has done a good thing by concentrating on higher build quality and specs rather than adding gimmicky features.

This is the type of phone built for a very specific audience, so whether or not you’ll like this device depends on if you can handle a phone of this stature and if you absolutely require Multi Window and stylus use on a regular basis.

If you’re already using the Note 3, you won’t need to make this upgrade immediately – but if you’re in the market for a big screen Android, keep the Note 4 at the top of your list as no other manufacturers have been able to offer something quite as competitive.

The Samsung Galaxy Note 4 is available in stores this Friday in the US, comes in white or black and starts at $299 for the 32 GB model on AT&T, T-Mobile, Sprint, US Cellular and Verizon. Other model colors, such as bronze and pink, will be available in Europe and Asia, and may come to the States later in the year.

For those still curious about the Galaxy Note Edge, Samsung says news of its release will follow later this month.