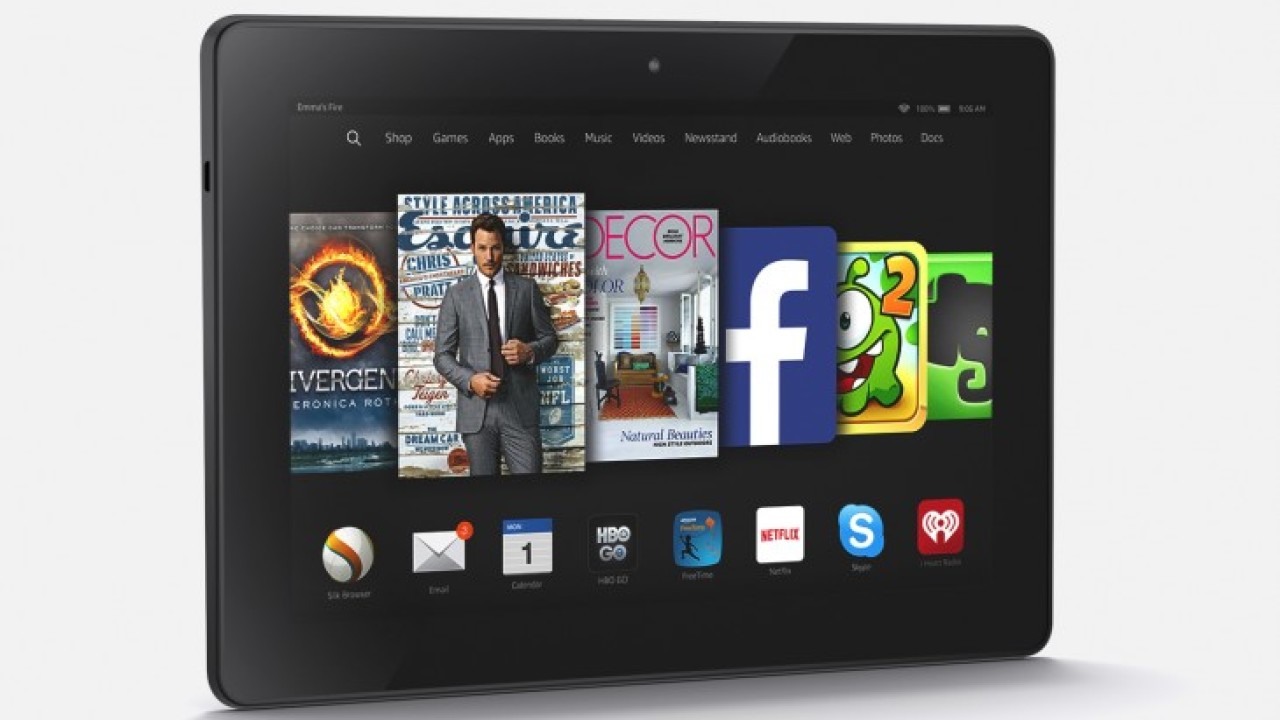 Amazon today announced the all-new Fire HDX 8.9, an upgrade to its current HDX tablet, adding a 2.5 GHz processor while sporting a lighter body and 802.11ac support for faster Wi-Fi connectivity.

The new Amazon Fire HDX is now equipped with a quad-core Snapdragon 805 processor and enhanced display that offers 339 pixels per inch in sRGB color. It is also Amazon’s first tablet with Dolby Atmos for better sound quality, and an 8 MP rear camera that can shoot 1080p HD videos.

New to the Fire HDX is a “Dynamic Light Control” chip that senses ambient lighting to adjust the screen temperature to closely match paper in its reader app. In comparison to the iPad’s Sepia reading mode, the Fire HDX’s screen is much warmer, with the text slightly less crisp. Whether or not this is a positive feature will depend on your reading display preference – I personally found the automatic adaptive display quite neat (and battery efficient!)

With its latest tablet, Amazon announced the newest version of Fire OS known as Sangria. The software update comes with a new Profile setting to let different users on the device customize their homescreen and brightness settings. When users switch between profiles, their current log-ins on third party apps like Facebook and Twitter, and the location of whatever content they last used (such as game levels, page in a book or movie progress) is automatically recalled.

Fire OS 4 Sangria, built on Android KitKat, now offers Family Library for family members to share Prime Instant Video content, apps, games and books without being locked in a particular OS. As long as household members are sharing content from their Kindle apps, it doesn’t matter which device they use. Amazon says it determines family members by using their home address and payment information.

Also new is a translation feature for FireFly, which lets you take pictures of foreign text for an English translation.

For business users, Fire HDX comes loaded with WPS Office. Documents edited in this mode get saved automatically to the Cloud for use on mobile devices or computers.

Third-generation Fire tablets will receive the software update for OS 4 Sangria over the air, with an update coming to the Fire phone early next year.

The Fire Keyboard and Origami Cover

The tablet comes with optional accessories, such as the origami cover (also available for the newly-announced Kindle Voyage e-reader) and the Fire Keyboard. The keyboard has a trackpad, and is optimized for Fire OS to begin searching when the user starts typing. The keyboard is 4.8mm thin, weighs 7 ounces and snaps in magnetically to the origami cover so all three components of the tablet pack together neatly for travel.

The new Fire HDX 8.9 tablet is starts at $379 for the Wi-Fi model and $479 for 4G, and will be available for pre-order tonight with an expected shipping date in October. The origami cover and keyboard are sold separately at $55 and $60, respectively.

Read next: Amazon announces the $199 Kindle Voyage, a premium e-reader with haptic page-turning