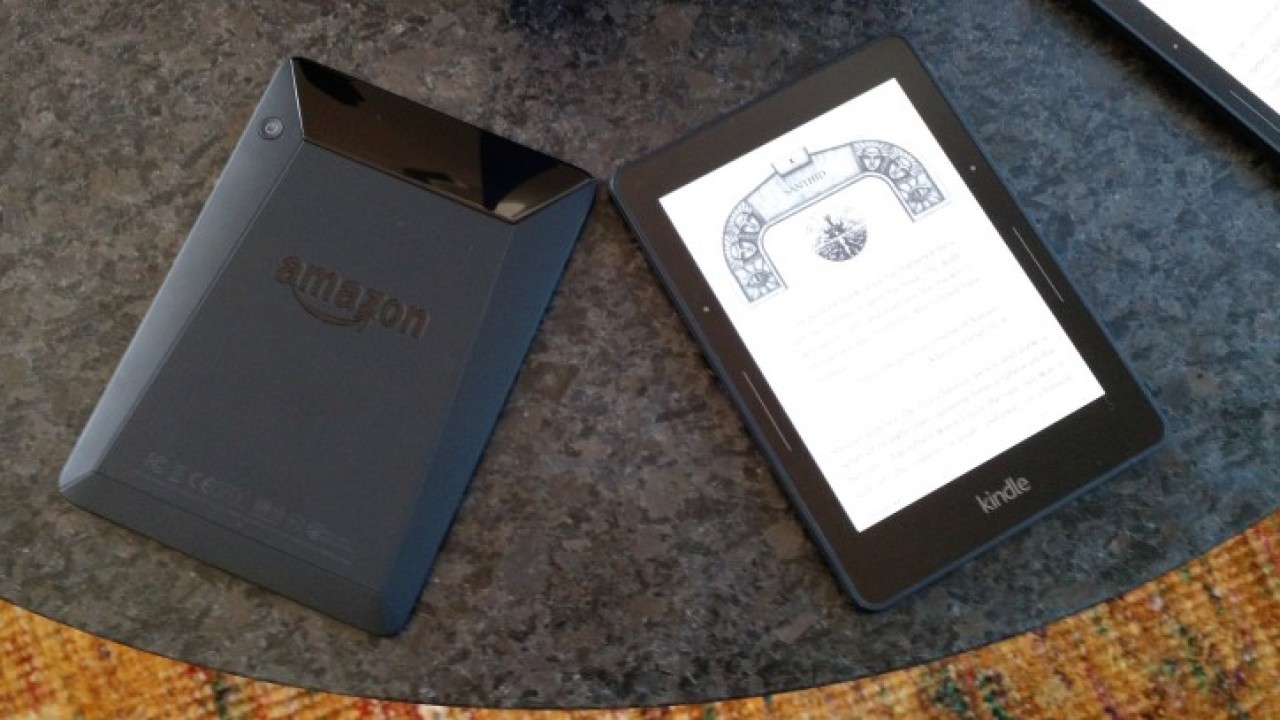 The Kindle Voyage sports a new design that has the same, matte look with the addition of a glossy bar across the top of the back. The Voyage weighs in at just 6.4 ounces, and delivers 300 pixels per inch with Amazon’s Paperwhite display.

New to the Voyage’s design are “PagePress” sensors located at both sides of the screen. This is smartly placed at the bezel where most users rest their thumbs while reading, allowing them to gently press to turn pages.

With each page turn, haptic feedback provides confirmation that the action registered. Amazon says this is designed so users do not have to move their fingers to flip between pages and chapters.

The Voyage is available with free 3G included. The screen automatically adjusts its brightness levels to match adapt to the reader’s eyes during longer reading sessions.

In our brief demo with the Kindle Voyage, it is definitely the lightest and thinnest e-reader Amazon offered to date. The adaptive screen remains one of the Kindle’s strongest feature even without colors, and the embedded bezel page-turner is an excellent addition.

However, I can’t help but feel ticked by all the fingerprint grease left on the back of the device with just a little bit of use. The Voyage also does not have speakers or microphone built in for audio books or speech-to-text. Small gripes, but I suppose that’s what your Kindle app is for.

With the new Kindle Voyage, Amazon also upgraded its current Kindle line. The original Kindle now features a touch interface, a 20 percent faster processor and twice the storage from 2GB to 4GB – but it still lacks frontlight. Kindle Paperwhite also gets an upgrade with double the original storage at 4GB.

All three Kindle models will come with the latest software update that includes expanded X-Ray features, deeper Goodreads integration and better vocabulary settings. X-Ray for Books now lets users browse the chapters by images as well as “Notable Clips,” which summarizes chapters into short bullets to keep users up to date with where they last left off.

The software also features a Word Wise functionality for a number of titles to include vocabulary definitions in-line. Users (presumably ESL readers) can adjust their reading levels as they become more fluent so definitions will only show up for more advance words.

Despite all the enhancements, all three Kindles still sport a battery life of six to eight weeks. The Kindle Voyage will come with an optional origami cover for $45.

The new Kindle is priced at $79, new Kindle Paperwhite at $119 and the Kindle Voyage at $199. Pre-orders begin tonight on Amazon.com, with devices shipping in October.