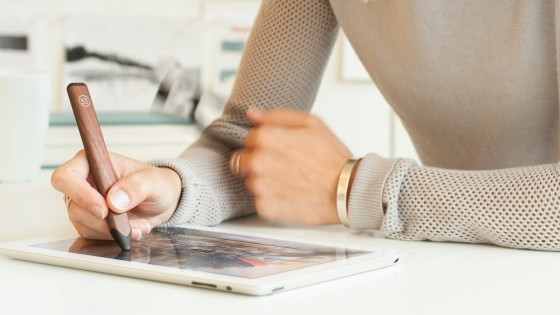 FiftyThree’s Pencil, a Bluetooth Low Energy (BLE) stylus for iPad, has launched in Europe more than nine months after it first went on sale in North America.

FiftyThree was founded by a design team that formerly plied their trade at Microsoft, working on Xbox, Kinect and other flagship products. The first product out of the starting blocks in 2012 was an iPad app called Paper, designed for note-taking, sketching, and just about everything else you can do with a physical paper pad. It was previously named one of Apple’s iPad apps of the year, and it was given a chunky visual redesign just a few months back, shortly after a trademark squabble with Facebook.

With its dedicated stylus in tow, FiftyThree is bringing the analogue and digital spheres together, delivering a traditional ‘touchy feely’ input mechanism with the wonders of modern technology. It has previously revealed some big updates are on the horizon with iOS 8 firmly in mind.

From today, FiftyThree is making Pencil available to buy from Amazon in the UK, Germany and France, and it will be available in two models – ‘Walnut’, made from hardwood, and ‘Graphite’ in brushed aluminium.

Paper automatically knows whether it’s your finger or pencil touching the page, and adjusts things accordingly. Pencil also features a built-in eraser to make deleting content a breeze, while you can use your finger in tandem to smooth out edges and blend colors.

The built-in lithium ion battery should last around a month under normal use, and can be charged by USB. And although it has been built for use with Paper, it can be used as a basic stylus on any touchscreen device.