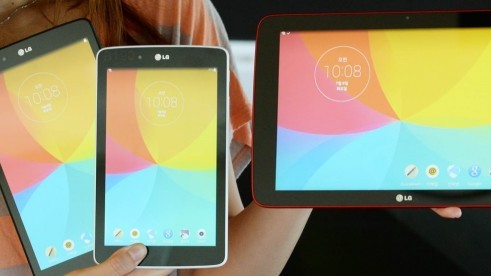 LG has begun to introduce the 10.1-inch version of its new G Pad tablet range worldwide, starting in the US on Monday. The company says it will make its way to markets in Europe, Asia and Latin America “later” this month with pricing to be announced — we’ve contacted LG to ask for concrete details.

Update: LG tells us that the G Pad will launch in South Korea on July 11, and will then go on sale in “most of the rest of the world” during the week commencing July 14. The company does not have confirmed launch dates for China and India at this point.

The G Pad 10.1 is the largest of three new tablets that LG announced in May. Each model features a 1280 x 800 pixel display and is powered by a 1.2GHz quad-core processor. The 10.1-inch version offers a five-megapixel rear camera and 1.3-megapixel front camera, while the seven and eight-inch versions include less internal storage, lower capacity batteries and reduced quality cameras.

The trio of tablets share some common features however, like the inclusion of Knock Code, Smart Keyboard and a simplified, LG-tweaked user interface.