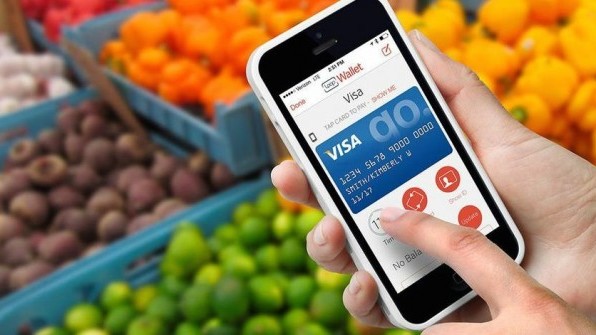 The $99 ChargeCase follows the release of the $39 Fob, which attaches to iPhone and Android devices through the audio jack. For a limited time, if you buy the ChargeCase, you’ll also receive a free Fob. Swiping your credit and loyalty cards through the Fob allows you to save their mag-stripe data to the LoopPay app so you can use the cards at retailers.

LoopPay’s technology generates a tiny magnetic field that you can hold above a credit card terminal to simulate the act of swiping a card.

The ChargeCase battery holds about 60 percent of an iPhone charge. That’s not enough to get me through a full day of heavy use, but it’s enough of a reserve so that I don’t get anxious if my battery is running low and I need some juice until I can get to an outlet. Im not too keen on how the ChargeCase looks, especially the giant Loop logo on the back.

While I’m a fan of what LoopPay is trying to accomplish, the extra bulk of the case isn’t quite worth the added convenience of not carrying your credit cards. However, if you’re already in the market for a battery-equipped case and the mobile payment angle is an added bonus, then the ChargeCase might be for you.

For my part, I’m not quite ready to ditch my wallet and go all-in with LoopPay. The real promise of LoopPay will arrive if it’s built into phones. That way, we’ll have the option of storing cards we don’t want to carry around, but we won’t be forced into doubling the bulk and weight of our phones.