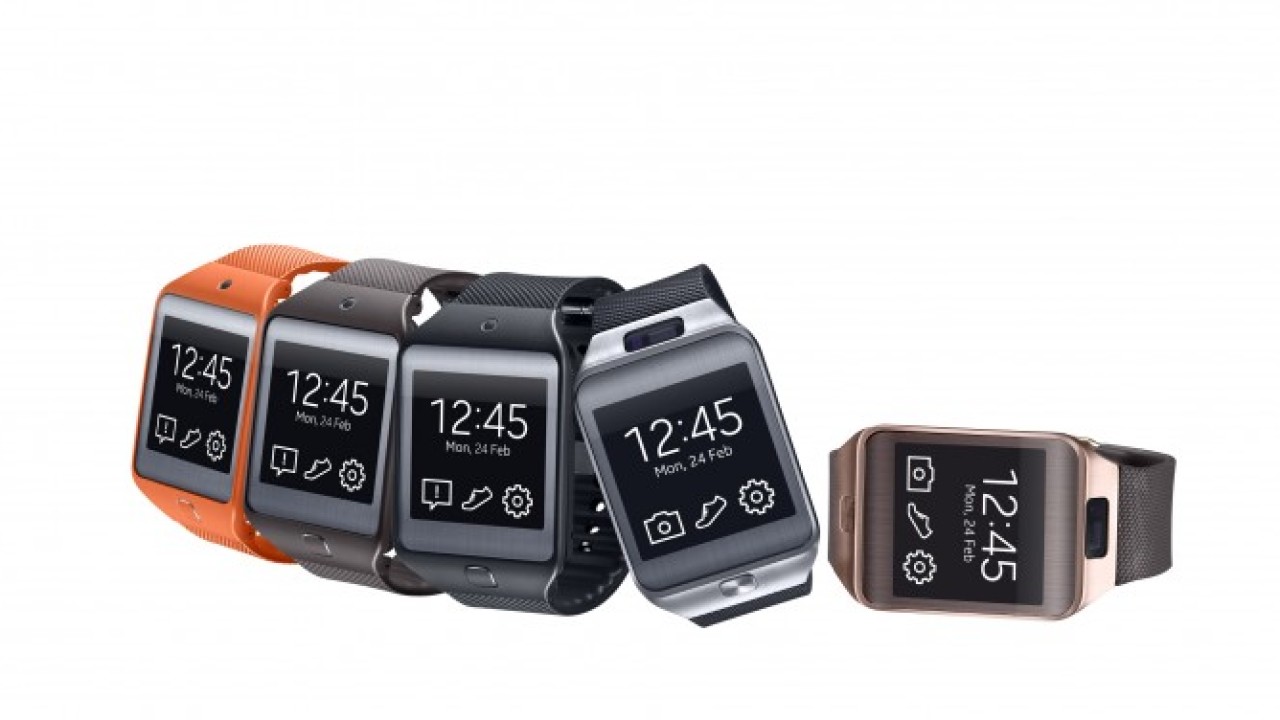 Samsung has rolled out a bumper crop of wearable devices in conjunction with its latest flagship, the Galaxy S5 — two Gear smartwatches and the Gear Fit fitness band.

As someone who has never worn a wearable device up till now, I’ve realized that the tricky part about wearables is that they have to be relevant enough to a user’s daily life. After all, why pay a couple of hundred dollars for a device that draws out certain functions of your phone if you still have to bring your phone around?

We put Samsung’s newest crop of wearable devices through their paces to find out if they are worth the asking price.

Samsung made significant changes to its Gear smartwatch family this time round after announcing two different models and switching the operating systems from Android to Tizen.

The review units that I received were both in charcoal black. They feature a sleek look with a metallic finish and are unassuming enough to match generally with most outfits. 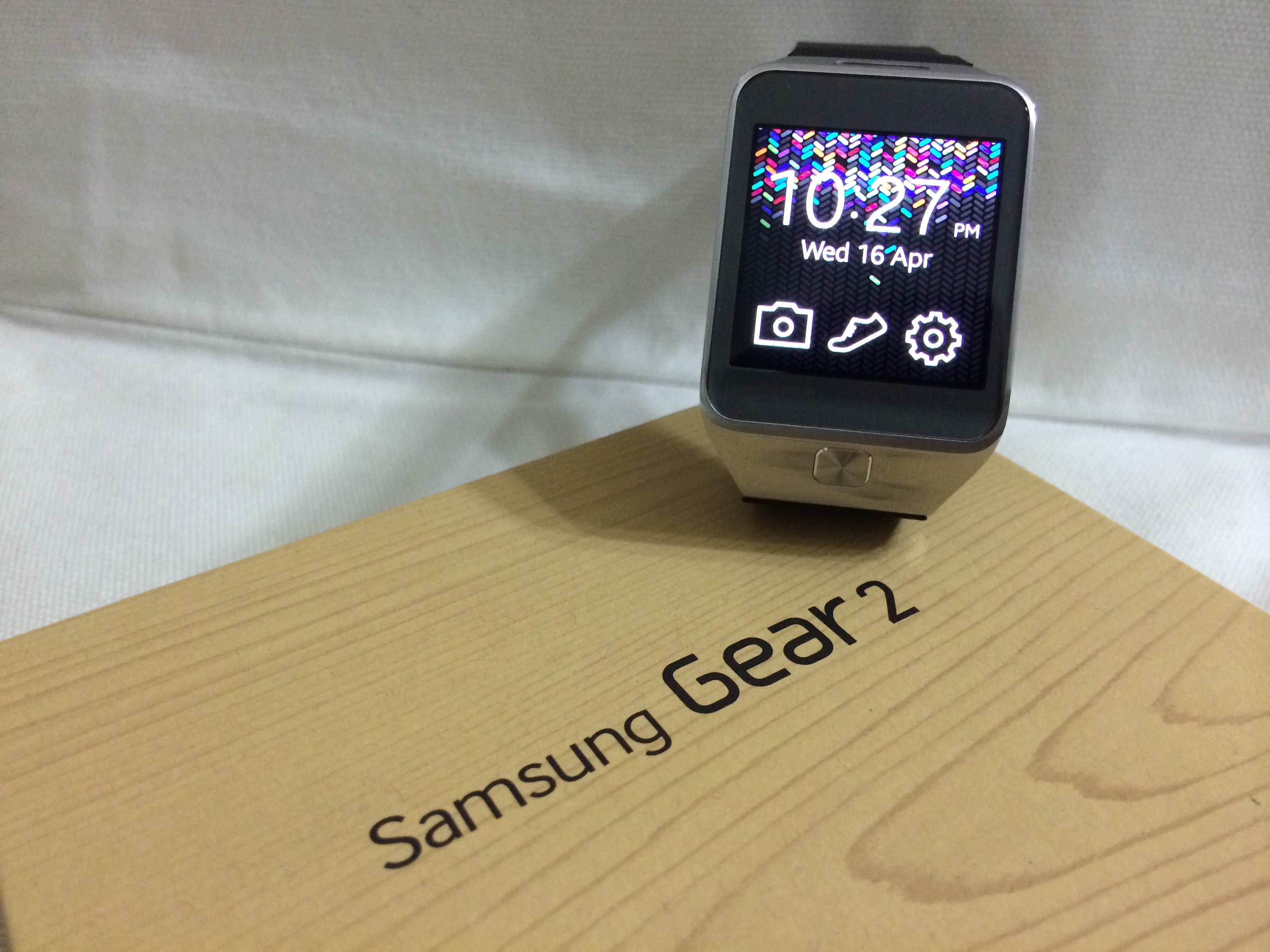 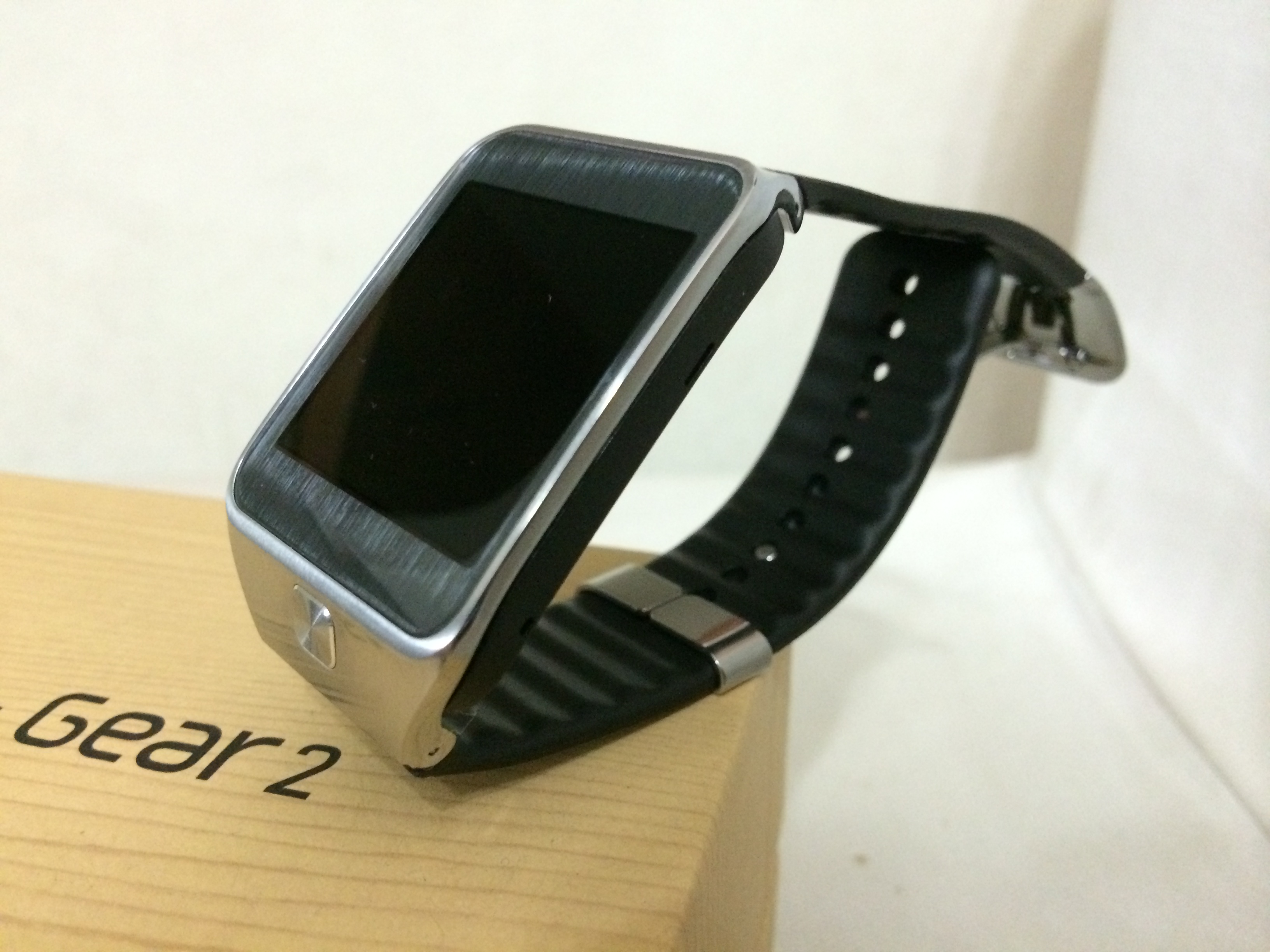 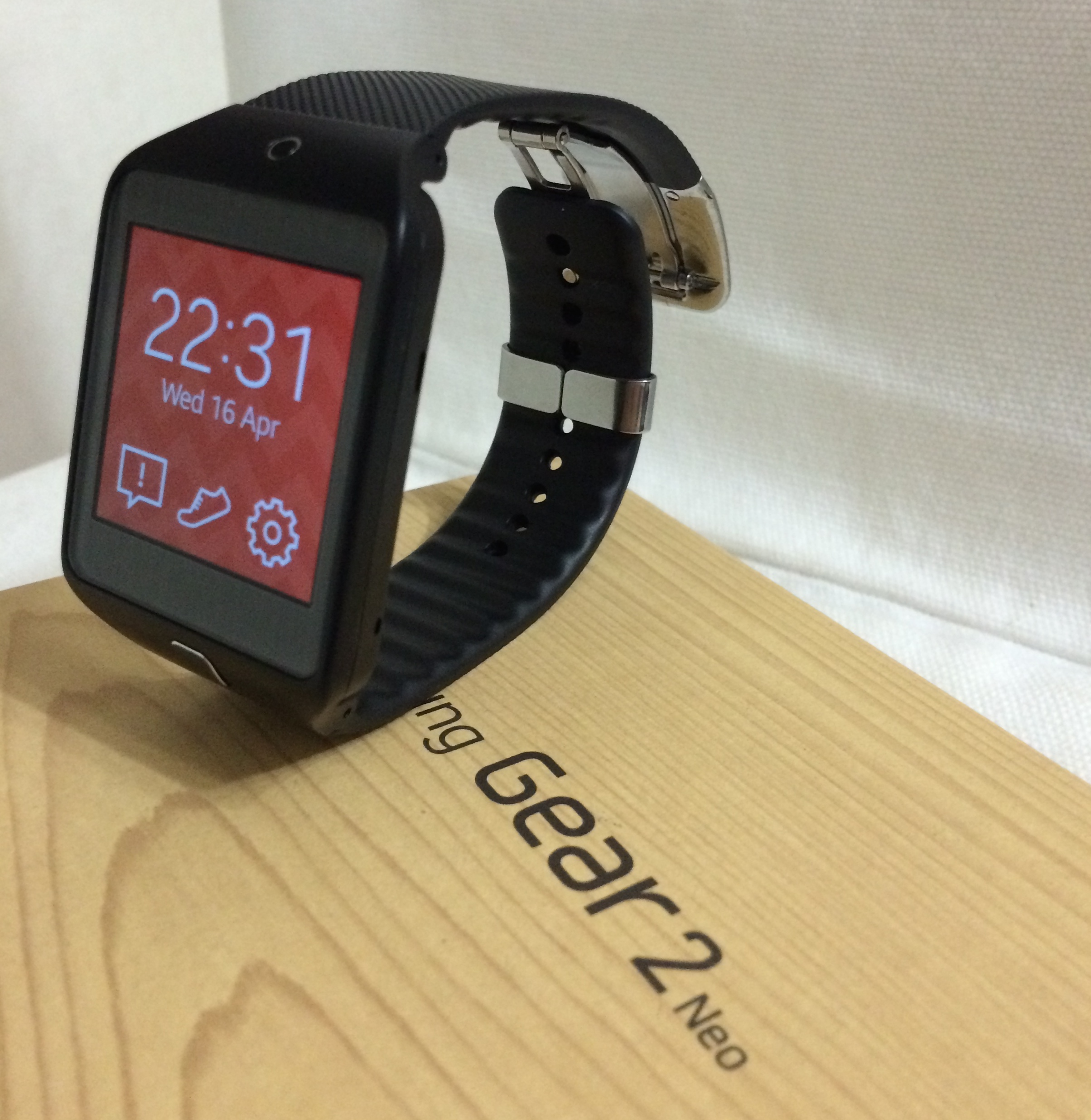 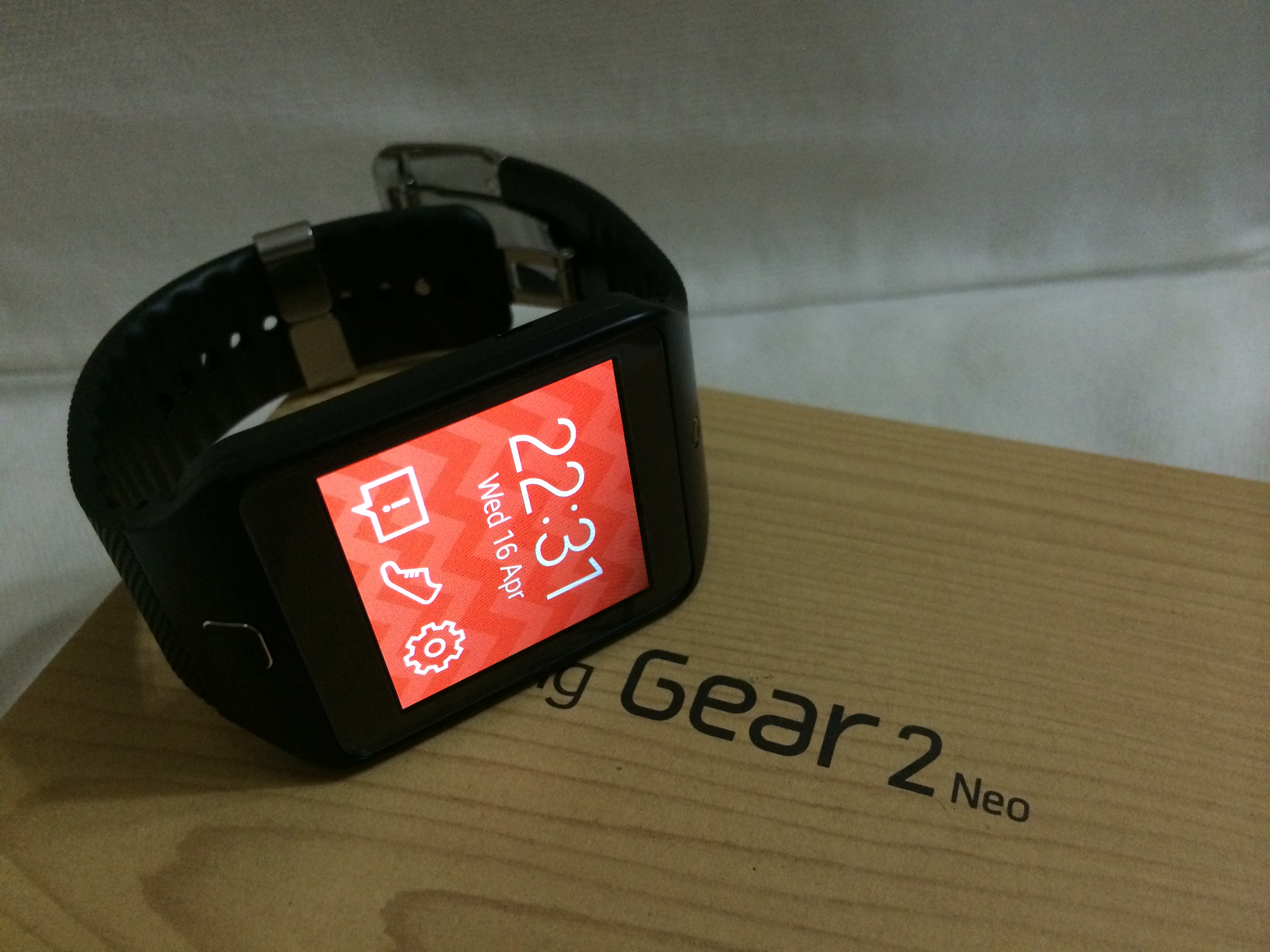 However, their overall look still leans towards being too masculine for me to feel overly comfortable with it — for example, I looked ridiculously mismatched when pairing the Gear 2 with a sun-dress. The watch face is also a tad big for my wrist. I wouldn’t swoon over either watch as being desirable fashion items — especially for women — but they do the job of looking decent enough for me to not feel that embarrassed about wearing either of them out.

Navigating the Gear 2 and Gear 2 Neo comes pretty instinctively: all you have to do is swipe left and right on the 1.63-inch Super AMOLED touchscreen display to access menu items. There is also a square Home button on the bottom end of the watch face, making it extremely convenient to quickly go back to the home screen.

Preloaded apps on board the devices include Email, Media Controller, Gallery, Pedometer, S Voice, Schedule and Voice Memo, among others. There are also other apps that you can download and install via your Galaxy smartphone including Feedly and Banjo.

The thing about the Gear 2 and Gear 2 Neo smartwatches is that they are entirely dependent on being linked via Bluetooth to your smartphone in order to showcase their range of features — as with almost all other smartwatches on the market right now.

That’s fine if the main aim of the watch is to keep you company while driving, as a convenient alternative when your phone is charging in the neighboring room, or to deliver location-based or key notifications. However, the problem is that Samsung touts its Gear 2 and Gear 2 Neo as health-focused smartwatches which can go with you on long runs and hikes. To this extent, Samsung has even introduced a heart-rate sensor into the Gear 2 and Gear 2 Neo so you can measure how heart-pumping an activity has been for you. 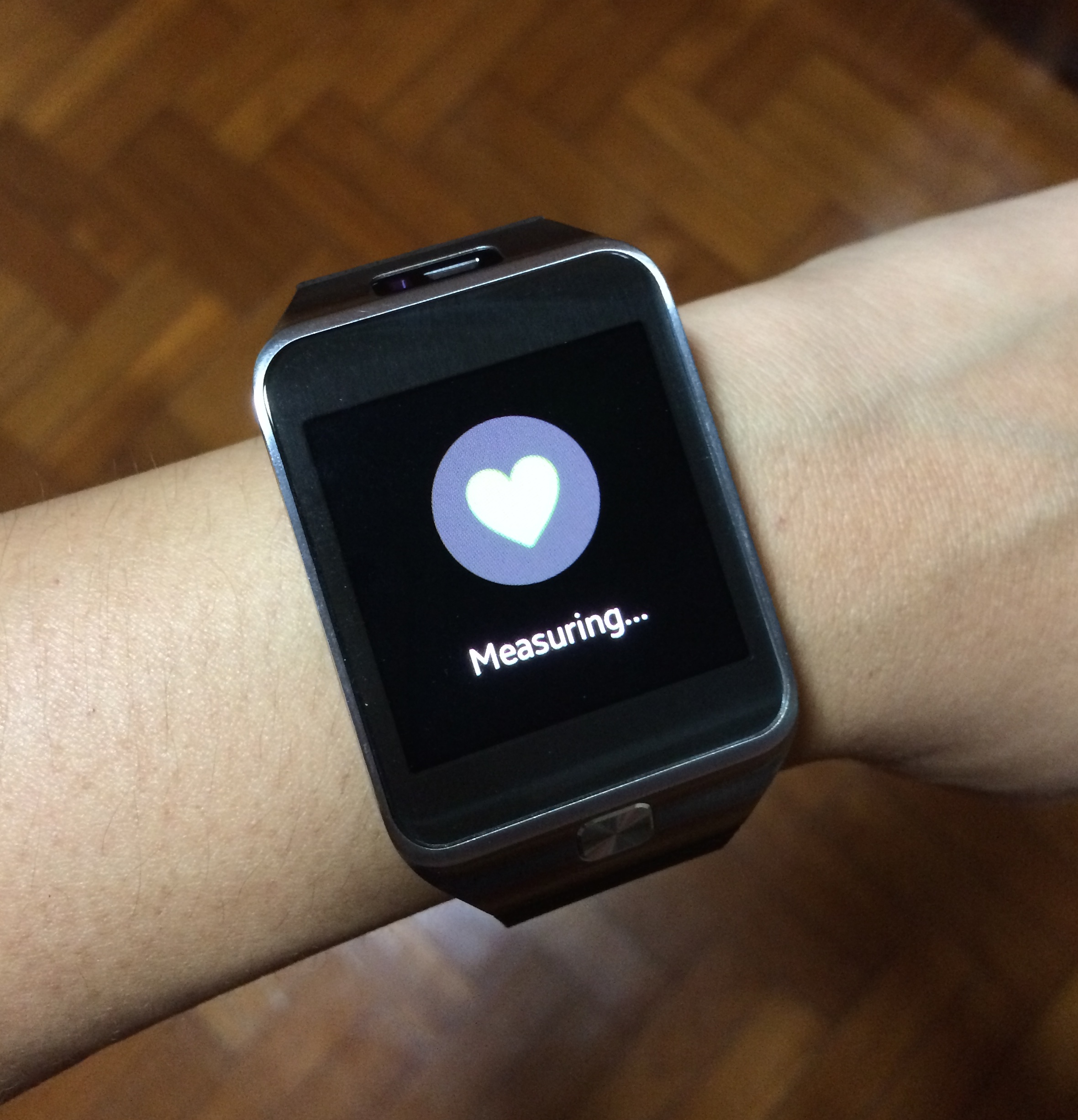 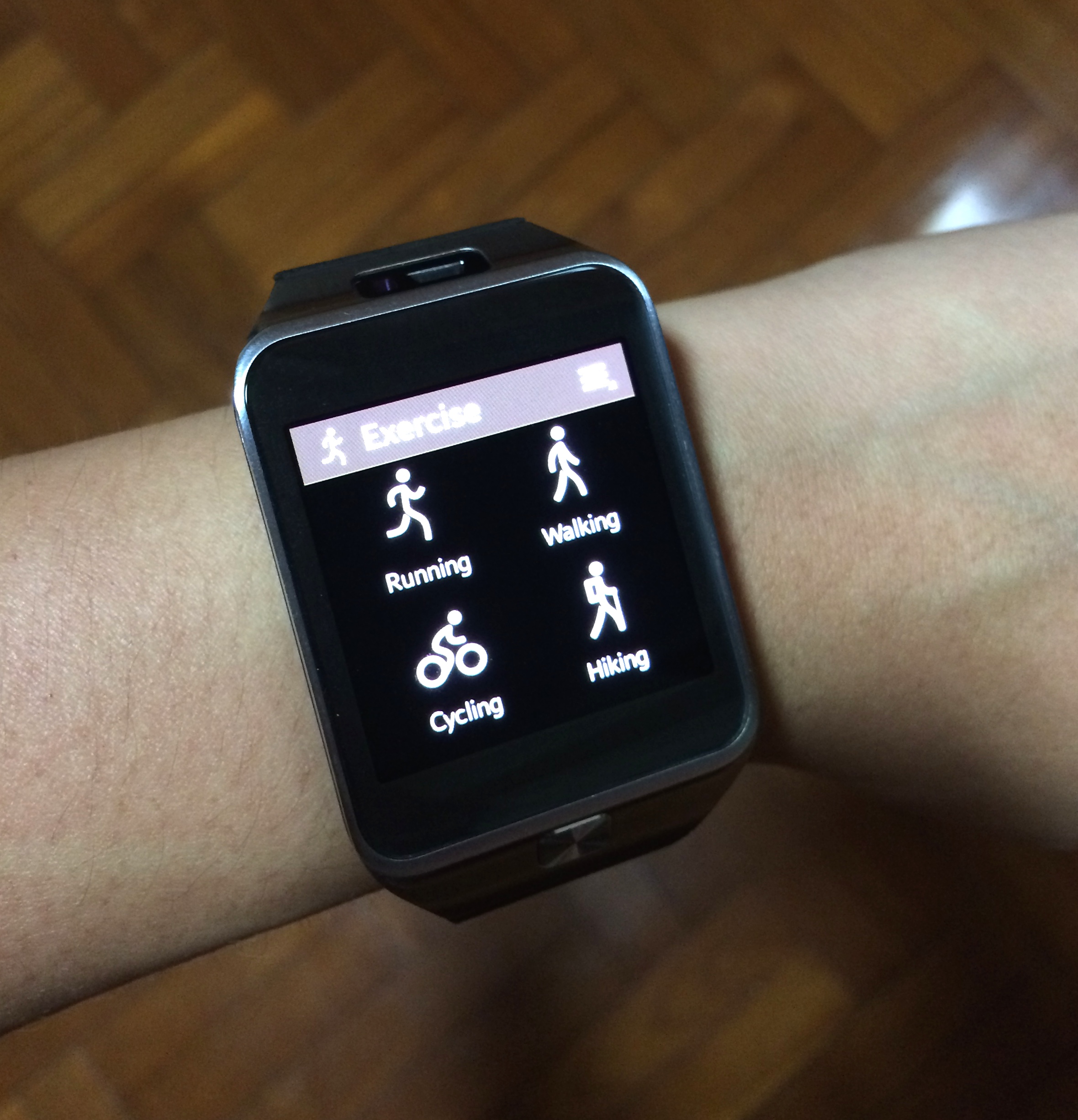 The dilemma about positioning its second-generation smartwatches this way is that you expect to be able to make and receive calls, as well as get notifications, without having to bring along your smartphone as well. However, all those functions are moot once you’re out of Bluetooth range of your phone.

It’s a pity that current technology simply doesn’t have all the pieces of the puzzle yet to make a convincing enough use-case for Samsung’s smartwatches.

What’s more, even if your smartphone is in your pocket while you run or hike or cycle, calling via the Gear 2 and Gear 2 Neo doesn’t really make sense at all. Without a Bluetooth headset, you’ll find yourself carrying out conversations via speaker phone or even struggling to shout out commands to S Voice.

Used indoors in reasonably quiet conditions though, it’s perfectly easy to carry out a phone call on the Gear 2 and Gear 2 Neo, which can be particularly convenient when you’re maybe out pottering in the garden and someone calls.

The 2-megapixel camera on the Gear 2 is very useful for times when you simply want to capture a moment on the go, instead of fishing out your phone from your pocket or bag. Though the quality of the photos isn’t fantastic, it works when all you want to do is share interesting images on social networks — here are two test shots. 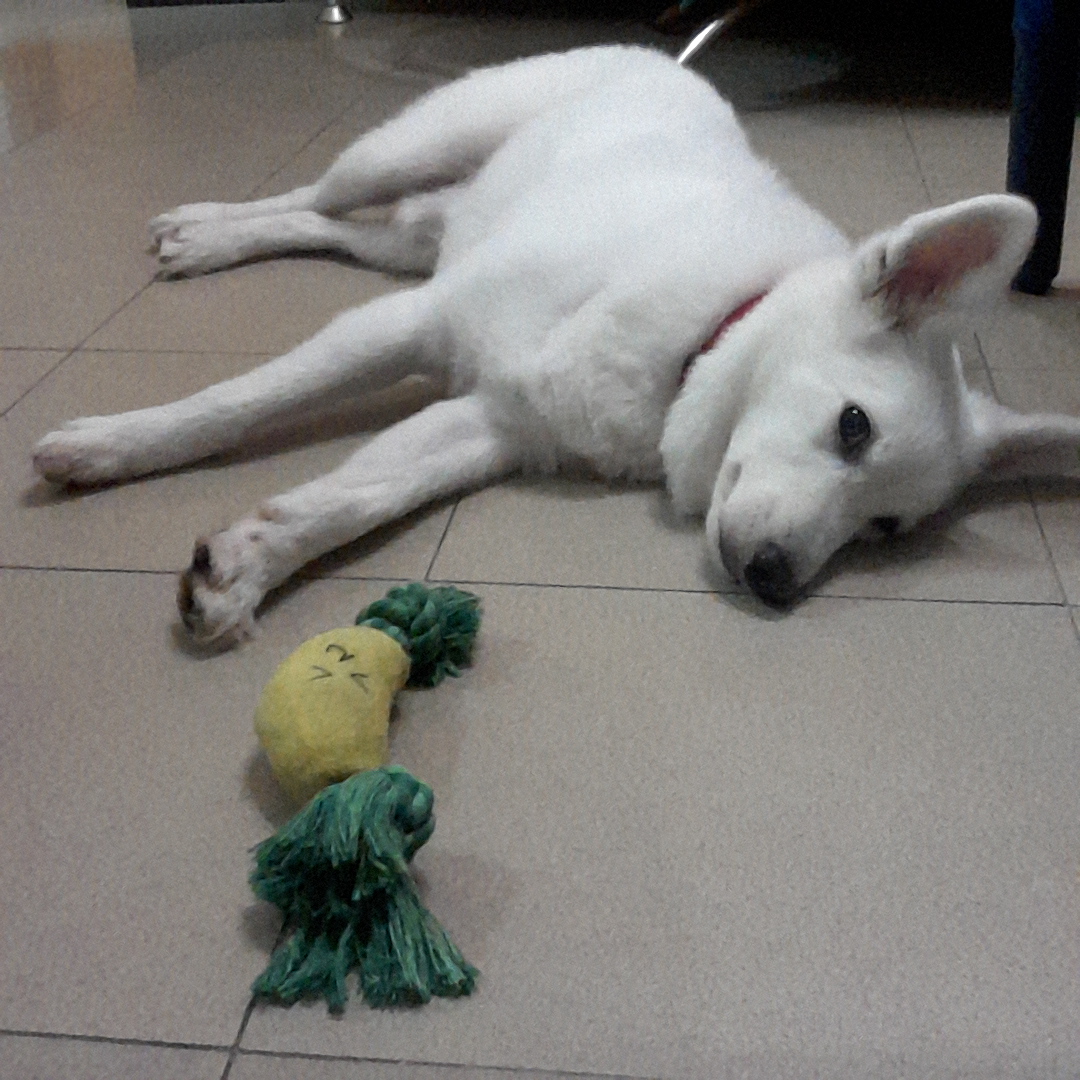 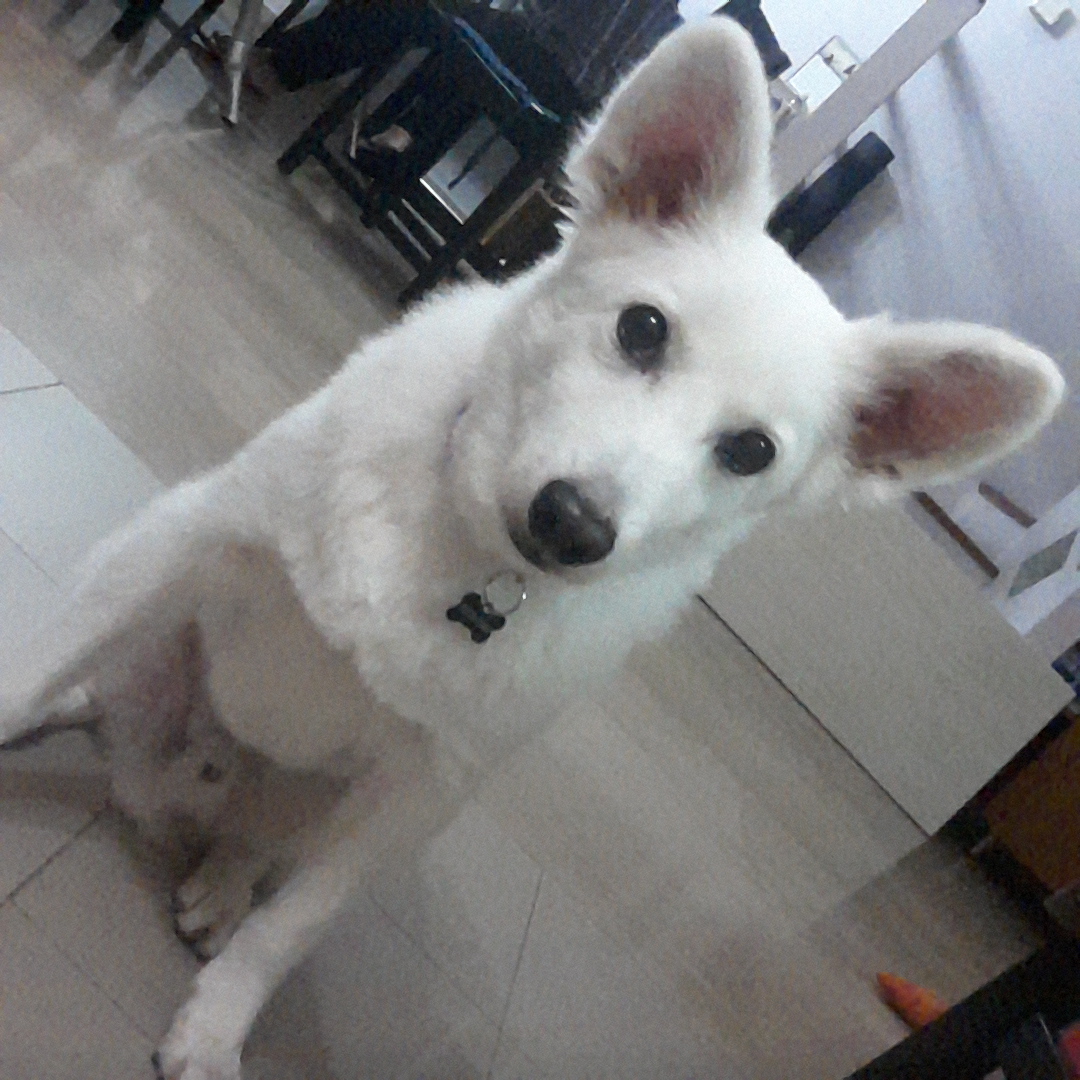 The Gear 2 can also record 720p video. What’s super convenient is that via Bluetooth, images and videos stored on the Gear 2 appear automatically and almost instantaneously on your smartphone without you having to do anything.

Now with the Gear 2 and Gear 2 Neo, you can not only receive email notifications that show you a preview of the message, but you’re able to reply too — you still can’t type an email but Samsung has input a few template responses which you can send. 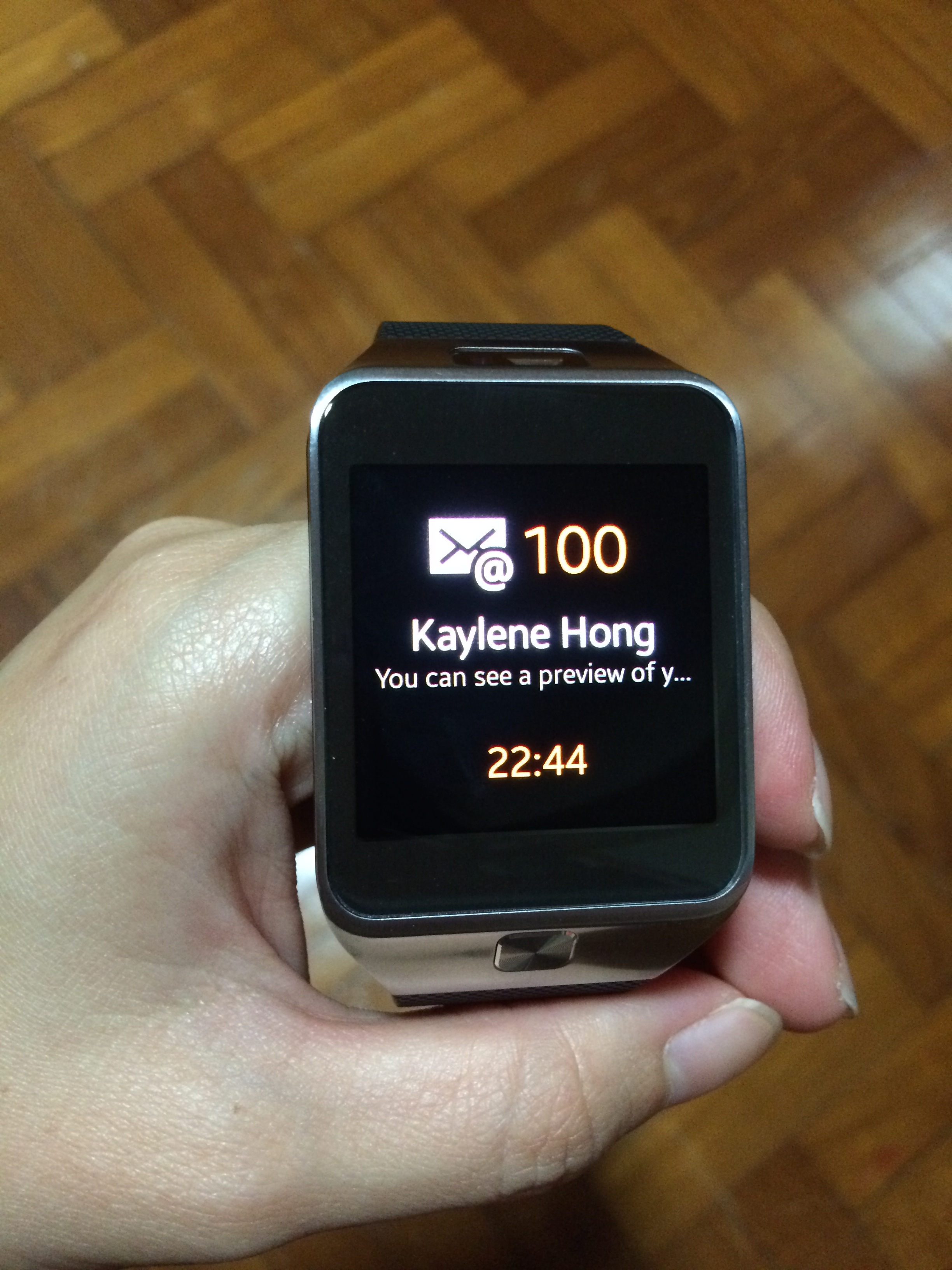 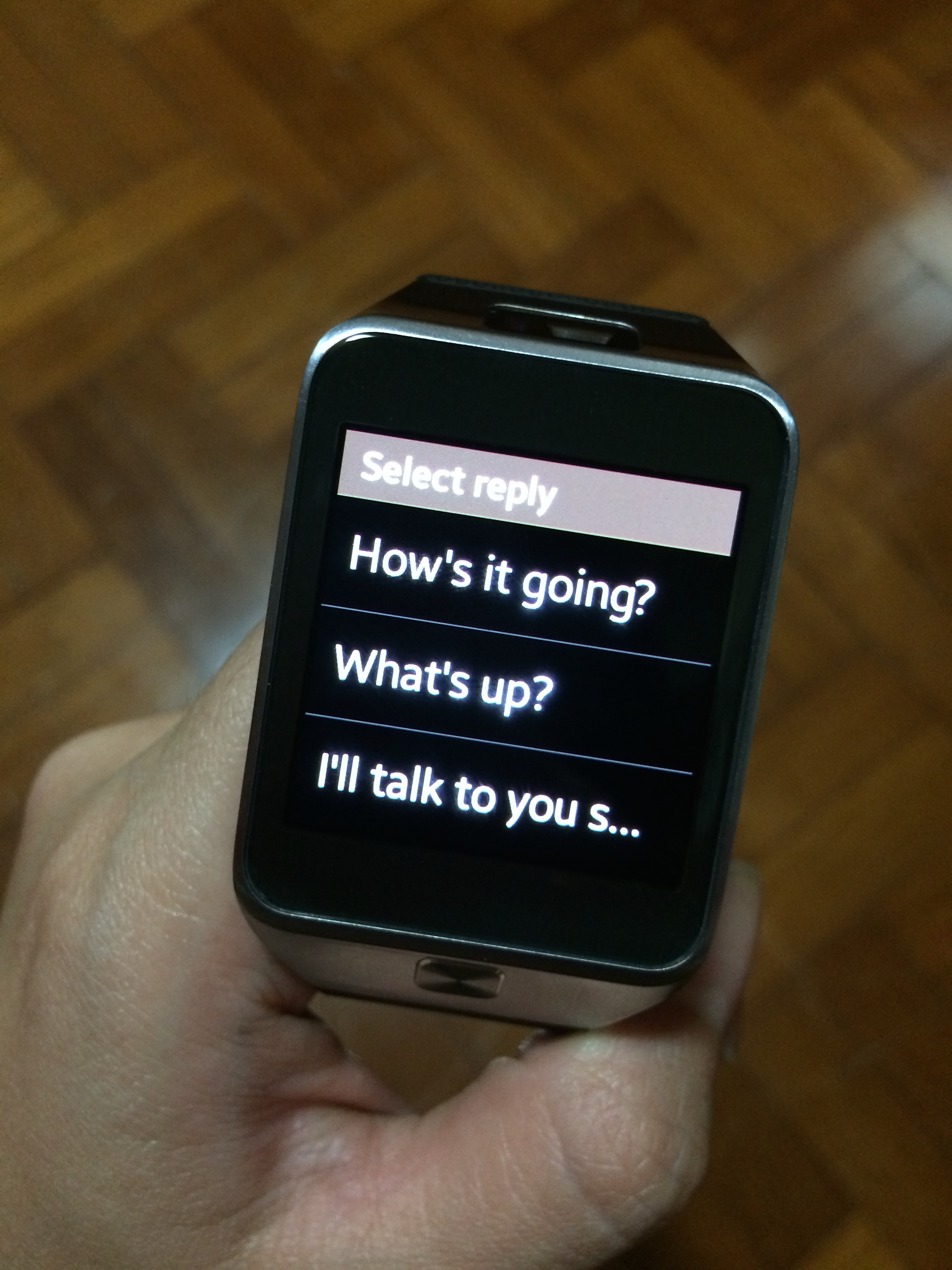 Both devices also have a standalone music player with 4GB of internal memory so you can send tracks over from the Gear Manager app in your Samsung Galaxy device. However, if you don’t have a Bluetooth headset this feature could be pretty much useless, as listening to music outdoors on speaker just doesn’t make sense.

There is also a useful ‘Find My Device’ function that Samsung has brought over from its first-generation Galaxy Gear, which lets you locate your smartphone provided it’s within Bluetooth range.

Samsung unexpectedly launched Gear Fit at Mobile World Congress, but I think it is a much more relevant product right now compared with its Gear 2 and Gear 2 Neo smartwatches, as it’s aimed squarely at those who are interested in wearables purely for fitness tracking.

The Gear Fit is a really lightweight, beautiful curved device that you can wear conveniently on any of your exercise routines without really feeling its presence on your wrist at all. What I like about it is that the 1.84-inch Super AMOLED curved display hugs your wrist — but at the same time, the reality is that my wrist is too small for it, so it still kind of spills over.

Those who find it awkward viewing images and text horizontally on the Gear Fit can even head over to the settings and switch it to a vertical display. The Gear Fit is also water and dust resistant, to ensure it will be a hardy companion on sweaty exercise routines. 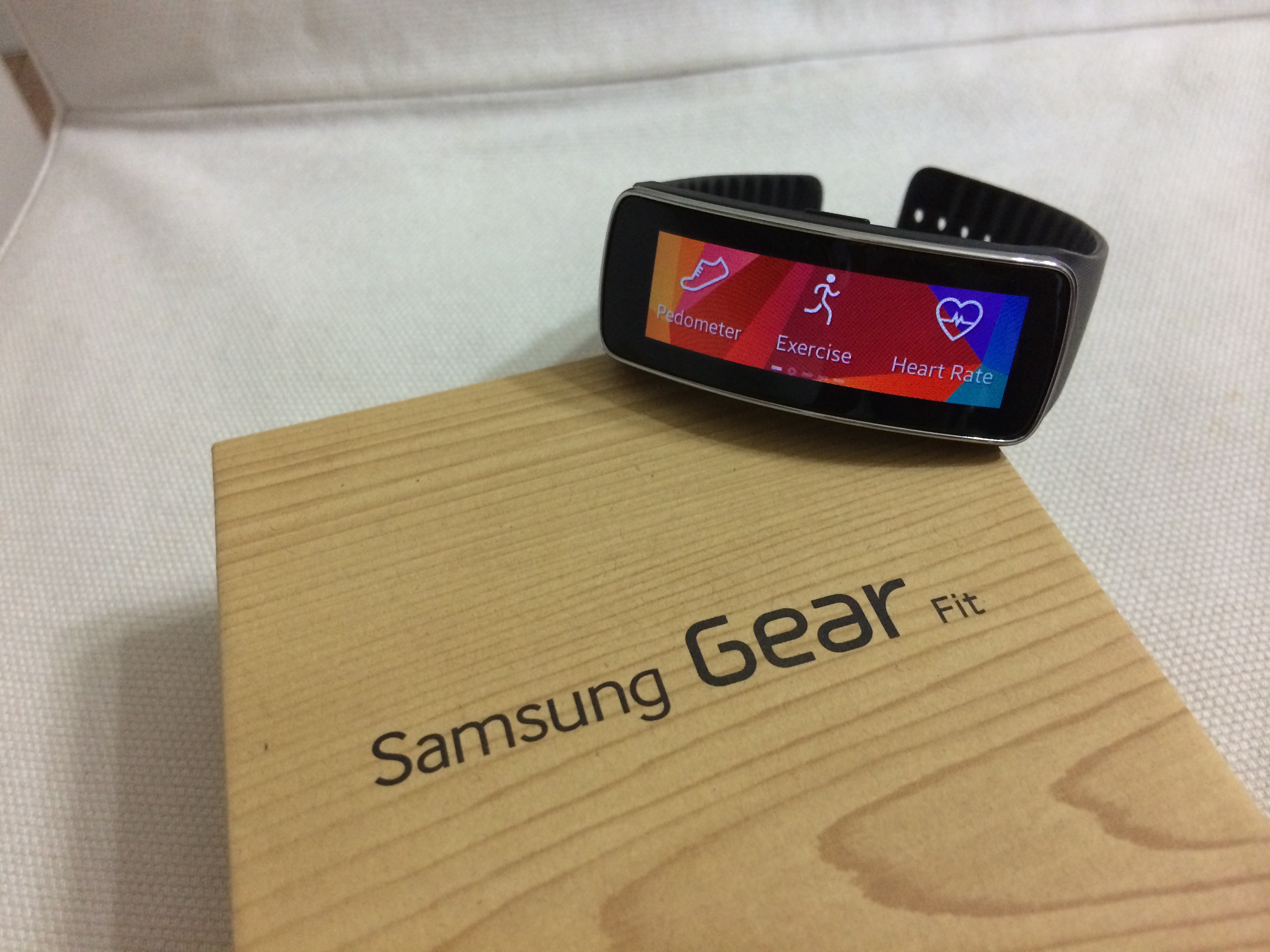 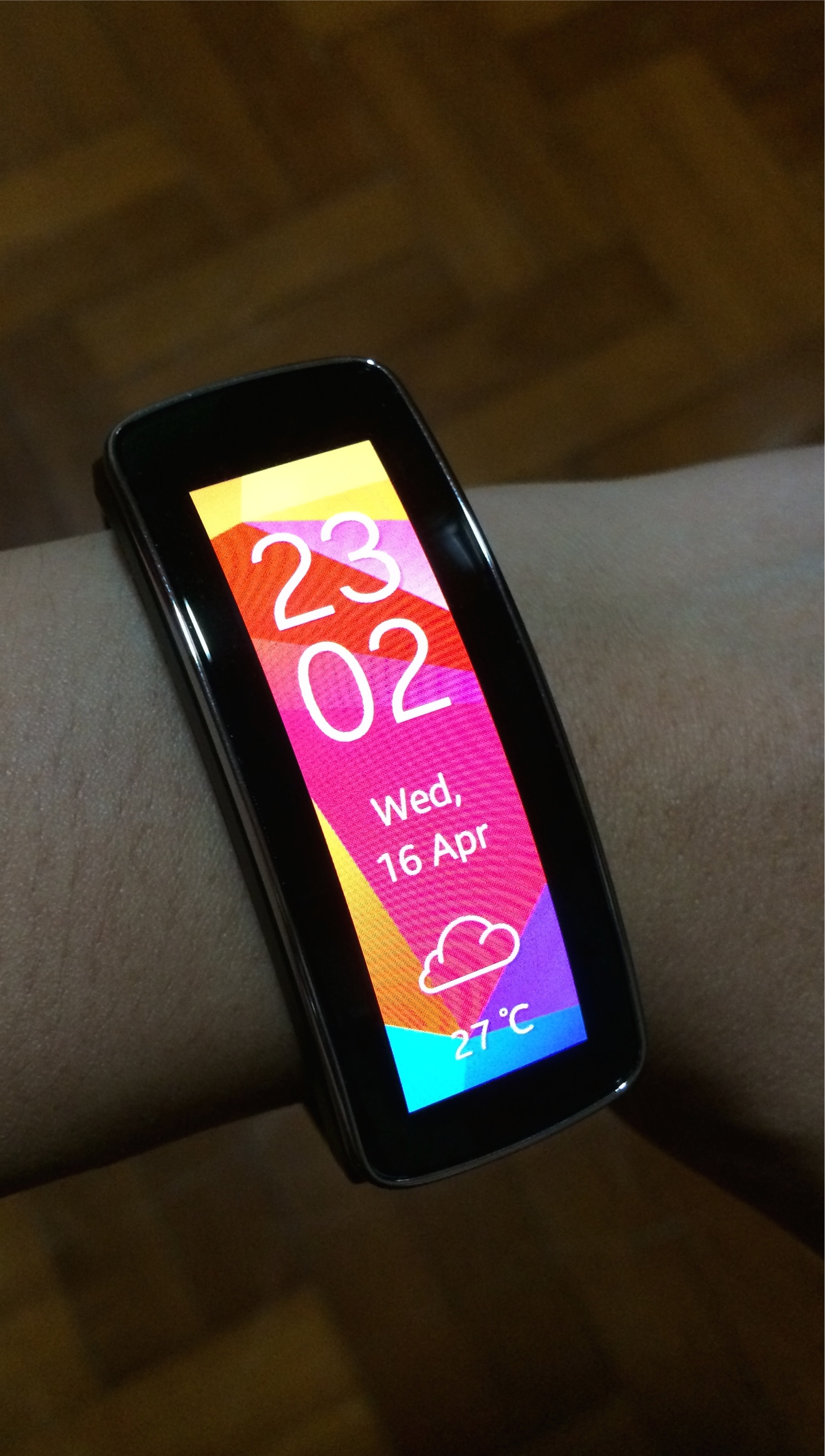 The Gear Fit is fitted with a hypoallergenic band, which is much easier to maneuver compared with the Gear 2 and Gear 2 Neo devices. All you have to do is press the metal buttons into the strap holes, instead of having to struggle with a clasp.

The Gear Fit comes equipped with a heart-rate monitor and can track your running, walking, cycling or hiking activities.

To navigate, all you have to do is swipe left and right to access various options including Pedometer, Exercise, Heart Rate, Notifications, Media Controller and Find My Device. 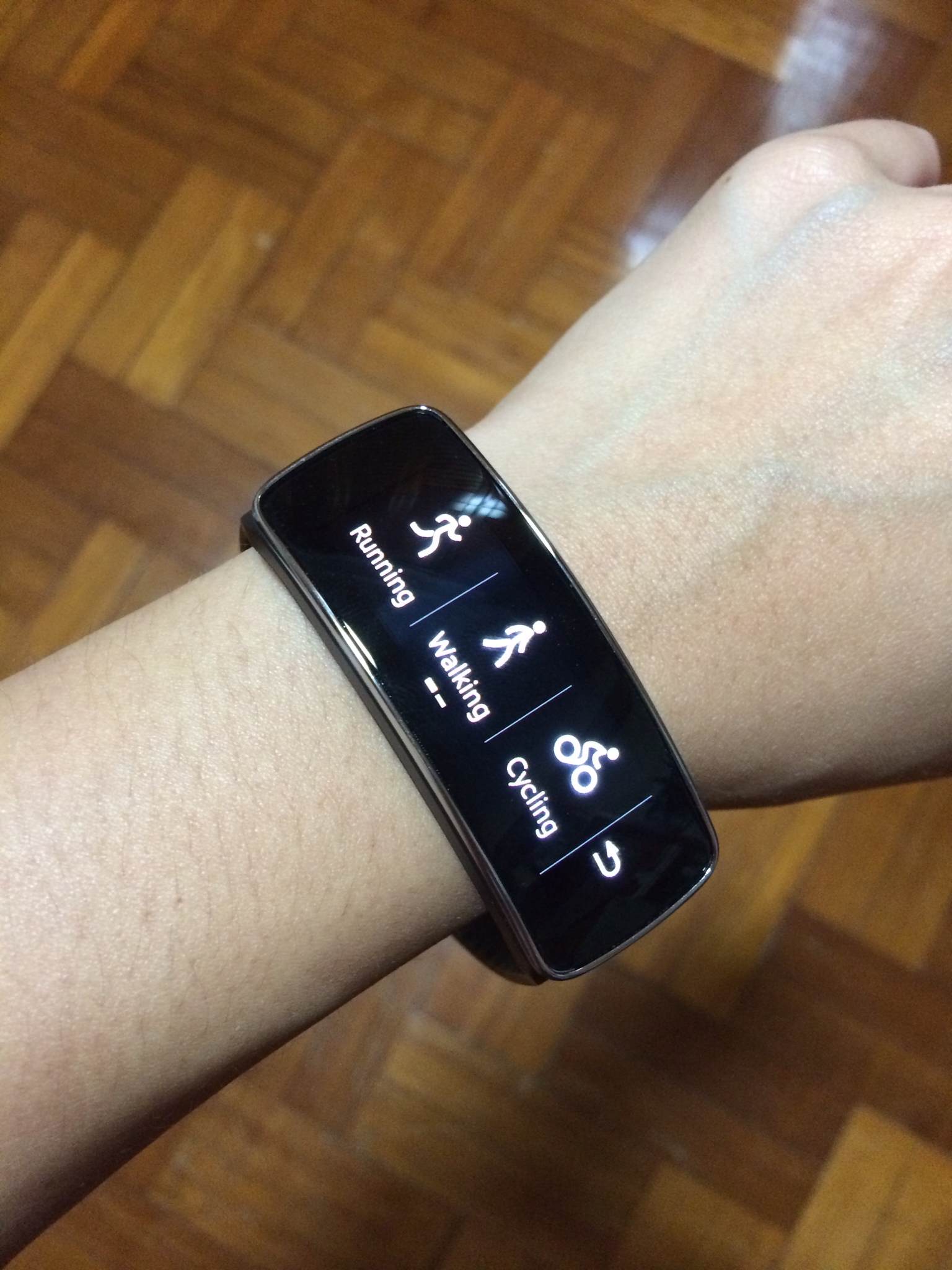 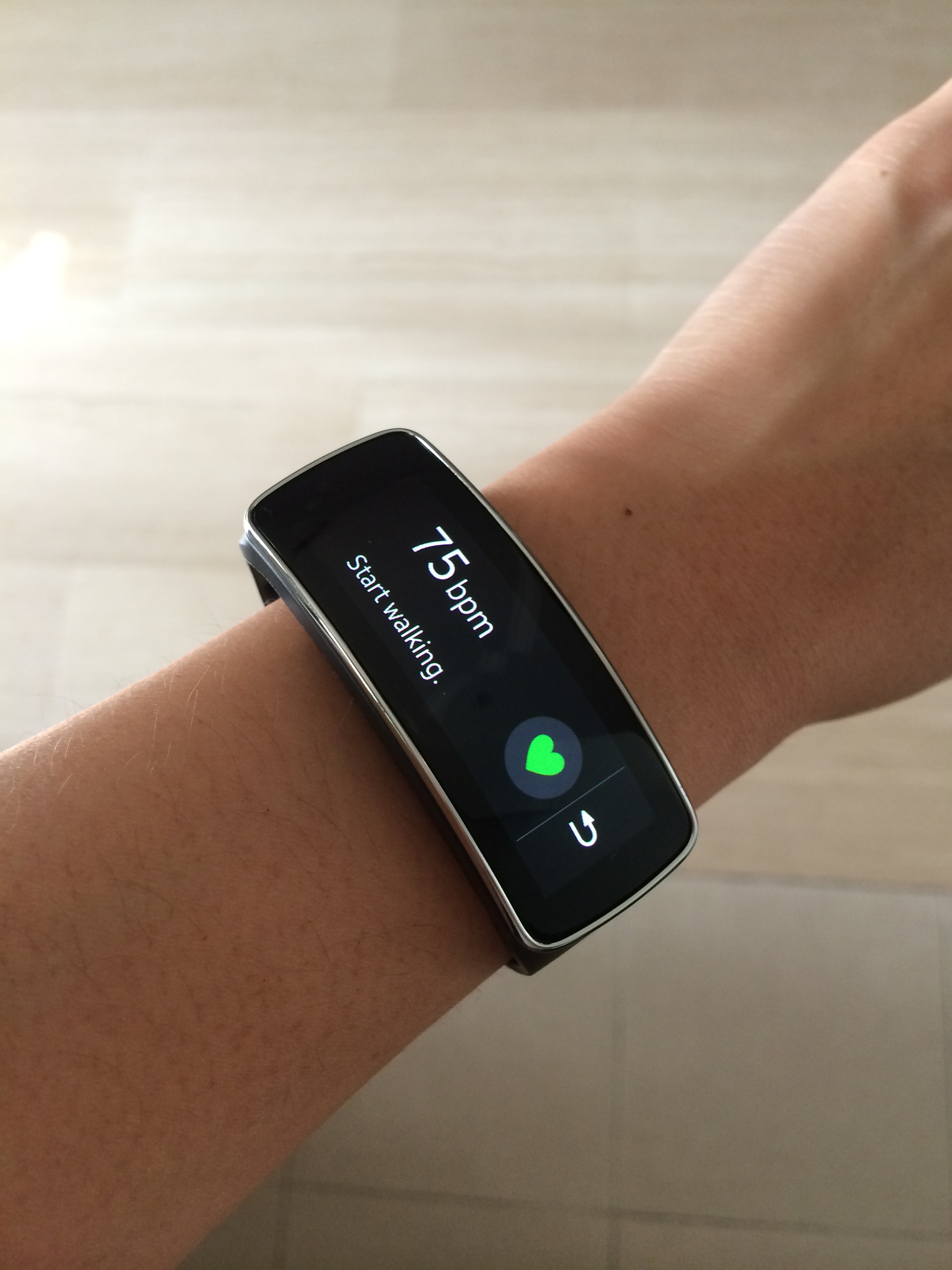 Exercise activities logged on the Gear Fit can also be easily synced with Samsung’s S Health via the Gear Fit Manager, which makes it easy for you to go on a run, come back and have your data on your phone.

However, the fact that the Gear Fit only supports four exercise options right now makes it a tad difficult to fit into my lifestyle and narrows the number of people it can target: basically only those who regularly work out in the boundaries of the four options provided. For example, there are many more fitness routines that people take part in which can’t be tracked using the Gear Fit. I could take it along to my Zumba or yoga classes but it wouldn’t do me much good.

To make it worth the money — the Gear Fit costs S$268 ($214) — Samsung has thrown in a few extra goodies. It can deliver notifications from Galaxy devices such as incoming calls, emails, text messages and alarms. However, you have to be within Bluetooth range of your mobile device before these notifications show up, which doesn’t make it a particularly relevant feature if you carry out your exercises without the burden of your smartphone.

However, the Gear Fit does have other useful features — a timer and a stopwatch for short sprints, as well as a ‘Sleep Mode’ that monitors your activity while you sleep. Similar to the Gear 2 and Gear 2 Neo, it also has a ‘Find My Device’ option to search for your smartphone within Bluetooth range.

Samsung is clearly trying to conquer as many verticals of the wearables market as possible — not only by releasing three products all at once, but also throwing in  a lot of features it hopes will appeal to users.

Its Gear 2 and Gear 2 Neo smartwatches have a lot of potential, but the tricky bit is making sure all the features are relevant enough for general consumers to want to pick them up. Perhaps it could be positioned more as a device highlighting important notifications for those who have to keep their phones away (at meetings or while driving), and less of a fitness-tracker, since the Gear Fit already caters to fitness bunnies. I’m also hoping to see future iterations of the Gear smartwatches feature apps that have been modified for better usage and not just being adapted to a smaller screen.

One major drawback though is that the Gear smartwatches can only connect to Galaxy smartphones. On the other hand, there are many options on the market with a wider reach — for example, Pebble’s smartwatch works with iOS and Android, while Sony’s Smartwatch 2 can connect to most Android 4.0 devices.

However, the Gear Fit is a pretty impressive device that’s extremely useful for those keen on tracking their fitness activities — it’s lighter, cheaper and has just the right amount of features a person needs while on the go. To me, the Gear Fit is Samsung’s strongest point in its crop of wearable devices this time round.