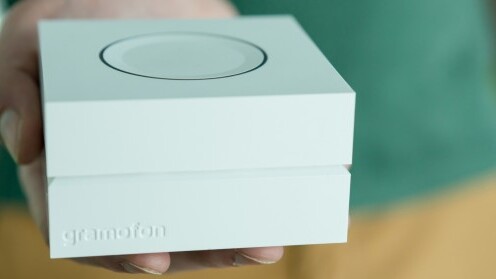 There’s no shortage of video-focused, Internet-connected boxes on the market and most of them can handle music streaming too. But what if you stripped out the video and concentrated entirely on audio? That’s what ‘social WiFi’ company Fon is doing with its new Gramofon device.

Hook a Gramofon box up to your Internet connection and not only will it stream music from Spotify, but it will act as a social jukebox where your friends can sign in via Facebook to line up songs to play. Oh, and because Fon has plenty of experience in building routers, you friends can use the Gramofon to get WiFi too, without needing your password. As long as you’re friends with them on Facebook, they can get online.

Streaming works like Google’s Chromecast; you send instructions on what to stream from your phone and the device pulls the music in directly. There’s no Bluetooth or AirPlay-type activity here – the battery in your phone or tablet won’t be taxed.

Although the R&D behind Gramofon is just about complete, Fon is taking to Kickstarter to help assess demand for the device and garner ideas about software features that can be added before launch.

“We’re established in social WiFi, but we’re certainly not established in music. We’re like a startup,” Fon CEO Martin Varsavsky says in a video interview with TNW that you can watch above. “There was a lot of debate within our company as to how good our product was and how to make it better, and so Kickstarter came up as a solution.”

The campaign has just gone live today and backers will be able to pre-order a Gramofon for a discounted price of $30 for a white unit and $40 for a black version, as opposed to the proposed regular retail price of $60 in white and $80 in black. Varsavsky says that Fon hopes to ship the first Gramofon units within 60 days.

(Update: Incidentally, a rather similar – if less polished-looking – device called the Blicko is also live on Kickstarter right now).