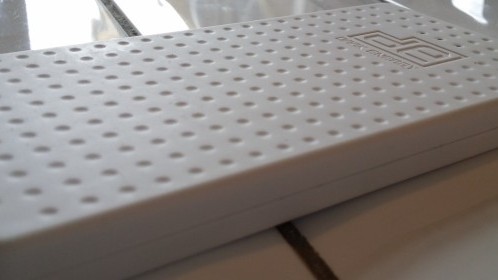 While modern smartphones, tablets and all kinds of other devices offer up a world of possibilities, they all require one thing – power.

They mostly share a common trait too, they’re generally not that power-efficient and can burn through a full charge in what seems like no time at all – this is certainly true for a lot of the power-hungry high-end smartphones you can buy today.

It’s no surprise then that there are a wealth of portable battery chargers (like the Satechi 10000 mAh or the Fluxmob) on the market promising to keep your devices fully juiced when you’re away from mains power .

A recent entrant is the 8,000mAh Dark Energy Reservoir, which although packing slightly less of a punch than the Satechi, is lighter, thinner and better specced in other ways.

The first thing that struck me about the Dark Energy Reservoir is how thin it is; 11.9mm to be precise.  It’s quite long too, at 139mm. Ultimately, it sort of looks and feels a bit like the size of a not-all-that-svelte smartphone – but don’t forget, it promises to recharge your phone four to five times before it needs recharging. Considering that, it’s remarkably thin and light.

The unit itself comes with a black or white, dimpled plastic case – we tested the white version.

On the front of the unit, there are three LEDs to indicate the charge level left in the Reservoir and on the right-hand side there’s a power button to start charging. Handily, when your phone or other devices are fully charged, the Reservoir stops trying to charge it so you won’t drain power there either.

On the bottom of the device are the two ports for connecting your devices. That’s right, ports. One is a 2.1A USB port for things like tablets and the other is a 1.0A port for your smartphone, both can be used simultaneously. Sitting between the two is a microUSB slot for charging up the Reservoir.

The company says that left untouched, the battery pack will hold its power for up to a year.

Touted as good for at least four full phone charges, my testing saw me get around that amount, although if you have particularly large capacity devices, it could be a little less. As well as using it just for charging my smartphone, I fully charged the Reservoir and then threw a few different devices at it.

From full, it happily took a totally dead YotaPhone, a nearly exhausted PlayStation Vita ‘Slim’, and a pair of much-depleted Sol Republic Tracks Air wireless headphones back to 100 percent power. It even had a bit left over to recharge part of a Note 3 before giving up.

You might have noticed that up until now, I haven’t mentioned its price. It’s $129 (around £80) and if you want international delivery outside the US, that’s an additional $25 – making a total of $154 (~£95). So, it’s by no means the cheapest option on the market. Both the alternatives mentioned at the start of this article are considerably cheaper. There are other potential downsides too – as it has a pretty large capacity, it’ll need several hours solid charging to get it back to 100 percent if you do drain it all the way down.

Nonetheless, it’s small, relatively sleek and can really pack a punch, charging two devices simultaneously if you need to – and for that, it just about earns its price tag. As I said, it’s not the cheapest, but if what you want is four or five full charges of your phone ready to go at any time, you could do a lot worse than considering the Dark Energy Reservoir.