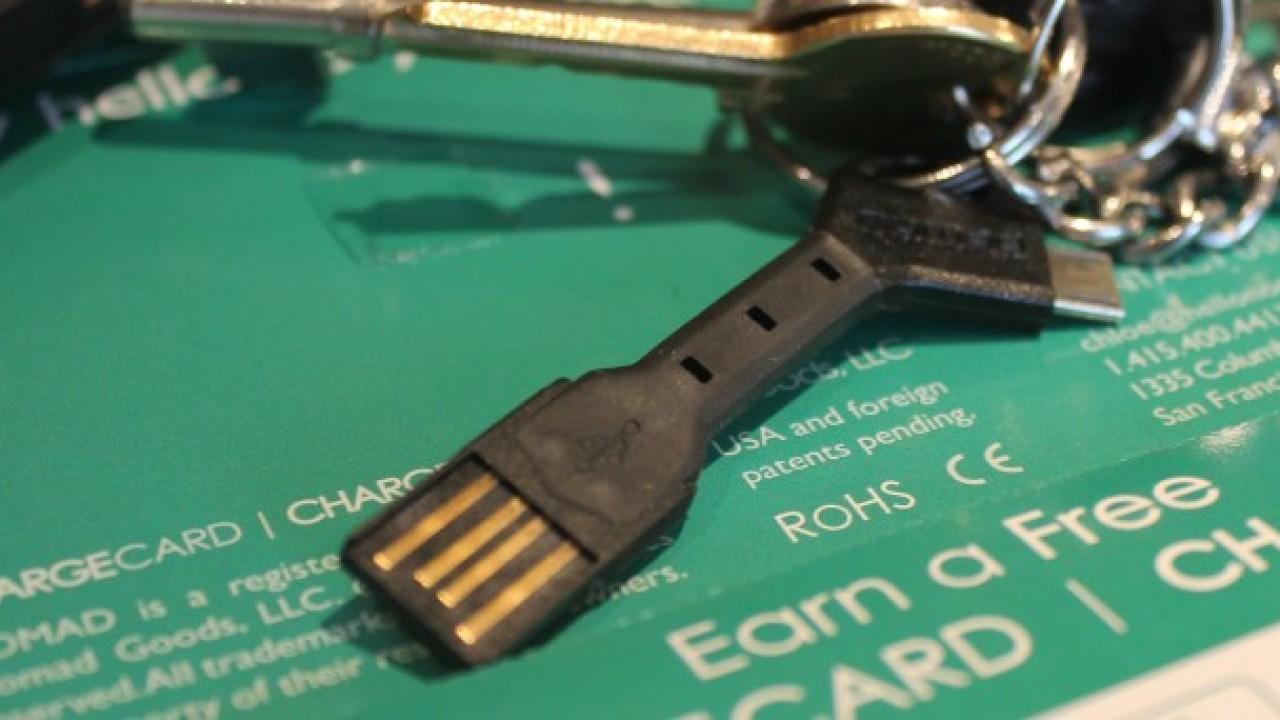 Picture the scene: You reach into your bag to grab your USB cable, hoping to give your Kindle or iPad an extra shot of juice before you leave the office for the day. But then you remember – you switched bags that morning and forgot to move your cable to the new satchel.

It’s not a life-altering dilemma by any means, but it’s a dilemma nonetheless. And it’s this dilemma that the Nomad Chargekey hopes to solve.

The Chargekey was funded via an Indiegogo campaign, eventually closing with more than $170,000 in the coffers back in December, having originally only sought $50,000. Available for Micro USB devices (e.g. Android phones, Windows Phone, Kindle) and iOS devices with a lightning connection (e.g. iPhone 5 and iPad mini), the premise is pretty simple.

You hook the Chargekey onto your keychain using the little hoop, and then you’ll never leave home without it. Assuming, that is, you don’t forget your keys.

While you can of course remove the Chargekey from your keychain, the idea is you place your keys in between the device and the USB port, and connect them up.

In terms of downsides, well, the obvious one is that you can’t really hook this up to a wall-charger given it’s so miniscule. But it’s not really designed for that scenario – it’s supposed to remain on your keychain and sit next to your laptop. Perhaps a more genuine issue over time will be the wear-and-tear it’s likely to endure being in your pocket, in amongst keys and other potentially scratchy objects. With that in mind, Nomad actually offers a separate device called a Chargecard, which is a credit card-sized incarnation of the Chargekey, and slips inside your wallet instead.

Costing $25, the Chargekey perhaps just creeps in at the right end of ‘affordable’, and if you buy two or more items at the checkout, the US-based company will ship worldwide for free.

That all said, when you consider you can buy a tiny Micro USB cable on Amazon or eBay for just a few bucks, one that can be slipped inside your wallet, then the $25 price-tag does start to seem a little punchy. Thus, the Chargekey will work well as a gift perhaps, or for those who really need to have a USB cable tethered to themselves at all times.

Related read: The Fluxmob Bolt: A tiny wall-charger and backup battery that packs a punch