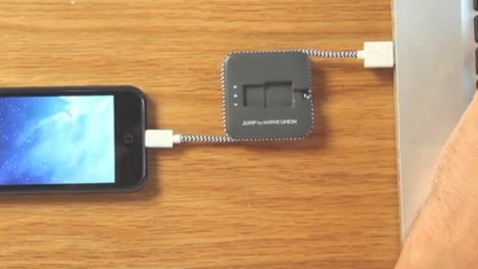 Keeping the batteries in your smartphone and tablet topped up throughout the day can be tough. Instead of strapping on a bulky case or carrying an external power brick the size of a small tank, Native Union is offering a smart, pocket-sized charging cable and portable battery called JUMP on Kickstarter.

It’s smaller than a hockey puck (50mm x 50mm x 13.6mm) and the two reinforced cables wrap around its exterior to keep it clean and mess-free. An 800mAh battery is hidden inside, which is roughly a third of the power pack found in the iPhone 5 and 5s. While it won’t bring your device back to 100% charge from flat, it should still prove yourself for those who find themselves in the red during the latter part of the day.

The JUMP’s pièce de résistance is its ability to automatically recharge its own internal battery once it has finished reviving your smartphone. So if you’re charging from a wall socket or your laptop, JUMP will detect when the battery is full and begin charging itself unprompted. This means, at least in theory, that the JUMP should have 100% charge more often, and therefore more useful out in the wild.

Native Union smashed its $40,000 funding target in a little over 24 hours, but you can still pre-order the device by pledging $40 or more before the campaign ends on February 13, 2014. It’s available with a Lightning Connector or MicroUSB and is expected to ship in May.