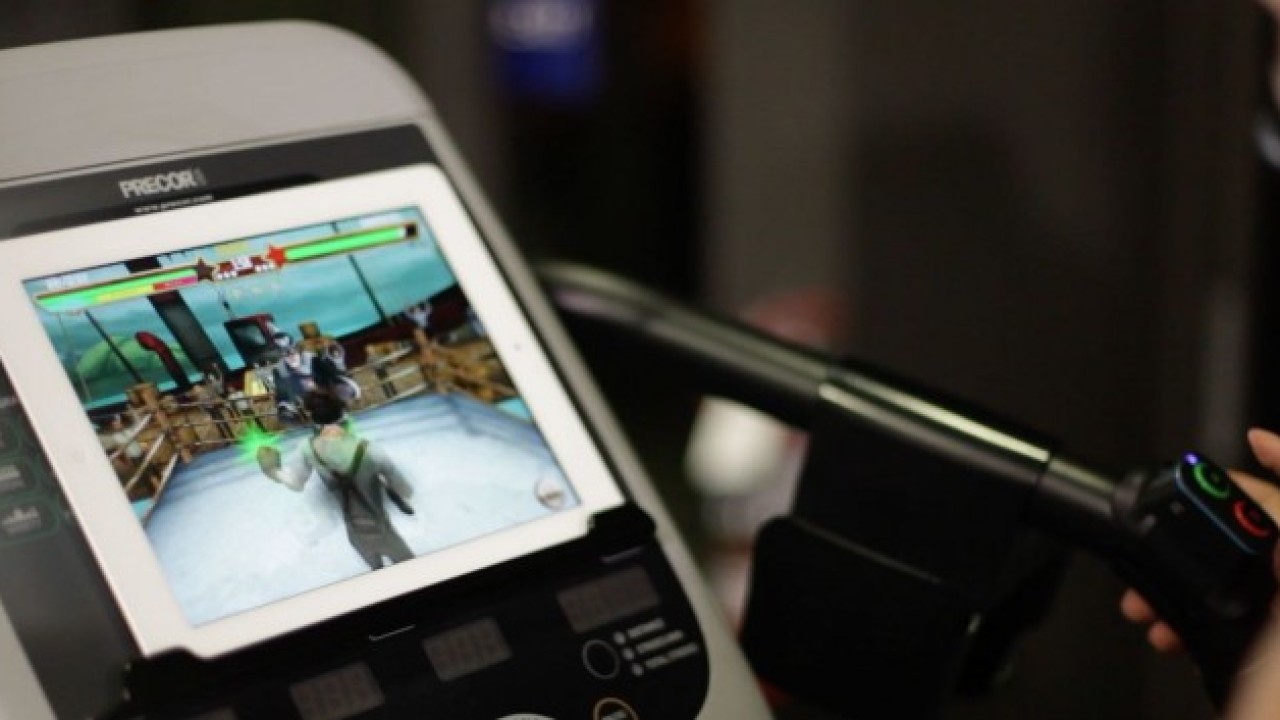 “Going back to our founding of Guitar Hero, we’ve witnessed how the fun of games can inspire the masses to be more active and social. Goji Play is the culmination of our dream to encourage people to get fit by fusing games and cardio equipment.”

When Guitar Hero hit the console market back in 2005, creators Kai and Charles Huang likely had little inkling as to the cultural impact the game would have.

Indeed, the multi-billion dollar franchise helped bridge the virtual and physical divide, morphing musical instruments with control pads and prompting gamers off their sofa and into a multitude of energetic, Springsteen-esque rock-God postures. Sure, it was all make-believe, but it was all kinds of fun too.

Now, the Huang brothers have brought on board Coleman Fung, founder of OpenLink, to pick up where they left off with a new company and product that’s striving to breathe fresh life into all those cardio machines you see in your local fitness center.

Following a limited launch back in October, Blue Goji is today officially rolling out Goji Play, which is a combination of hardware and software designed to work in conjunction with treadmills, exercise bikes, cross-trainers and all the rest. Intrigued? Read on.

The future of gyms

We’ve previously dug-deep on what the future may hold for gyms, and it’s clear that while mobile and new home-based technology is disrupting the market to a degree, there is an intrinsic human desire to be social. This means that gyms as a ‘thing’ will remain, but the technology within will evolve.

Health and fitness is a hugely profitable industry, and much of this comes down to gyms and health clubs. According to figures from the International Health, Racquet & Sportsclub Association (IHRSA), US health club industry revenue alone reached $21.8 billion in 2012, up from $20.3 billion in 2010.

So gyms are here to stay. And it’s this lucrative industry Goji is looking to infiltrate.

Goji Play: What’s in the box

The Bluetooth sensor acts as a Fitbit-like motion sensor which you can slip in your pocket, or clip to your waist/shoe when on a cardio machine.


As for the controllers, these can be held in one of two ways. You can strap them to the handles of your exercise bike or cross-trainer and use them to control the game like that; or if you’re on a treadmill, which will require your arms to be moving rather than fixed, you loop the pads around the foam baton instead and hold them.

In addition to this hardware, Goji Play consists of an arsenal of games and apps. And yes, you will need your own iPhone, iPad or iPod touch too.

Pivotal to everything working is the Goji Play app, which is basically the command center that lets you launch the games, set and track your fitness goals, and more. When you first launch it, you’ll be prompted to turn your equipment on – the sensor will need to be charged first of course – and you’ll need to pull the little plastic tabs out from behind the controllers which activates the AA batteries inside.

Then, follow the instructions by clicking the buttons in the order described.

You’ll also be given the choice of integrating with your MyFitnessPal account when setting up, but you can obviously skip this.

Once in, you’ll be asked to set your personal goals for the week – so how many hours over how many days you think you’ll be exercising.

Your likely next port of call will be the games – after all, Goji Play is all about the games. Though the library is expanding, at the time of writing you have the choice of eleven titles – most developed by Goji, but some are third-party efforts that have opened up to Goji’s hardware.

It’s worth noting here that all the compatible Goji Play apps have two modes – they can be played independently using the touchscreen controls of your iPad or iPhone. But that does of course defeat the purpose – you really want to be using these games in cahoots with the Goji system.

The exceptions here are APO Snow, and Vector Unit’s Riptide GP and Shine Runner which have been adapted through the Goji Play SDK, having first been developed for touchscreen devices. The plan here is to quickly accelerate third-party game compatibility using this SDK, meaning that Goji doesn’t have to worry about producing all the titles in-house.

The general standard of the games is high – I mean, they’re probably not going to win major plaudits among sofa-dwellers, but for the purpose at hand they’re good. It’s all about keeping your brain engaged while working out, making a tedious 20-minute 5km treadmill run feel more like 5 minutes.

The activity sensor in your pocket or on your waistband detects your motion, which effects the in-game speed or power (depending on the game). However, it doesn’t detect your actual speed – if the meter on the treadmill reads ’15km/hour’, this isn’t directly reflected in-game. It’s more about the general intensity of your movements.

There are a few issues worth noting with some of the games though. Super Moto X, for example, presents the gameplay with a side-on view – I actually found this quite disorientating given that my body was moving in a forwards motion on a treadmill. For me, it’s much better playing games with a first-person/bird’s eye view of the action – looking down along the track in front is best.

Also, Spin or Die – which I found quite enjoyable to play – only works in portrait mode. For a racing game, I would much have preferred the option of playing it in landscape.

It’s worth remembering here that your Goji sensor works just like the many activity trackers out there – it monitors your movements. So once your workout is complete, all your data is uploaded to Goji Play, and you can see a summary of your week’s activity in the app.

Goji Play works, and it works well. But when I tested this out in my local gym, at first it seemed as though a network connection was required to pair up the sensors and controllers through the Goji Play app. I had assumed that using Bluetooth would negate any need for WiFi, but to use the peripherals you will need to establish a connection with the Goji Play app – however you don’t actually need an Internet connection.

If you load a game with all your equipment turned on and talking to teach other, you will see this message at the bottom telling you to open the Goji Play app. So open the app, and if you try to log-in without a WiFi connection you’ll get an error message. But keep the app open and run it in the background, you should now be able to play the games using the controllers.

However, even if you do manage this, you still won’t be able to track your workout data – it can only track this data in real-time, so you can’t upload this later once a connection is re-established.

This is fine if you’re playing with your iPhone or cellular iPad, but with a WiFi-only device, it could be problematic. My local gym doesn’t have WiFi, so I cobbled together a solution involving me tethering my iPad to my smartphone. So this could be one potential downside for would-be customers – an iPad is the preferred device here given the screen size, but if you don’t have a 3G version, or if your local gym doesn’t have WiFi, it’s difficult for you to use this to the full extent.

Goji Play is available to buy now on Amazon and through BlueGoji.com for $99. Meanwhile, check out the official demo video of Goji Play in action.