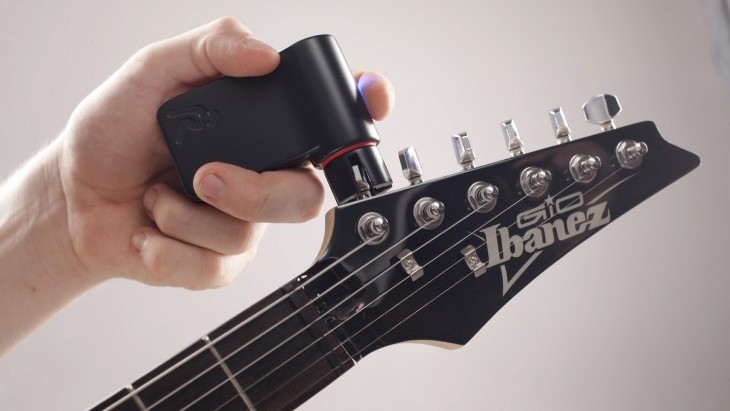 When you think about it in terms of user experience, tuning a guitar is pretty much the worst part of playing the instrument. Roadie, a Bluetooth-connected smart tuner that automatically adjusts your strings for you, is about to make things a whole lot easier.

The project recently graduated from the China-based Haxlr8r hardware accelerator with the launch of its Kickstarter campaign, which reached fully-funded status in about five days.

Co-founders Bassam Jalgha and Hassane Slaibi gave me a brief demo of the tuner over Skype, and I’m sold. You simply connect the Roadie to your smartphone, stick it on a tuning peg, pluck a string and let it automatically adjust it. Gibson already has its own automatic tuning system, but Roadie will work with just about any guitar as well as stringed instruments that use similar pegs.

The accompanying app can store information on the elasticity of your strings in order to let you know when it’s time to replace them. You can also use it to pick preset and custom tunings.

Tuning a guitar is one of the main deterrents for beginners, so a device like Roadie would increase the likelihood that you’ll stick with the instrument after you pick it up. Combined with new learning methods like Ubisoft’s Rocksmith game, picking up the guitar is now easier and more fun than ever before.

Jalgha and Slaibi plan to begin shipping the Roadie, which will retail for $99 but is available to Kickstarter backers for $79, in June 2014. Kickstarter hardware projects have a propensity for delays, so I was curious whether that was a realistic date.

“We gave ourselves margin for error and any mistakes,” they said. “We’re really hoping we’ll be one of the very few Kickstarter hardware projects that deliver on time.”

The fact that they’ve spent the past few months with Haxlr8r should help their case significantly. The pair have already settled the manufacturing process and just need to complete work on the Android and iOS apps.

Jalgha and Slaibi noted that relocating to China for the accelerator helped them to iterate. They managed to create new prototypes weekly during the program while still keeping the process affordable.

“In four months we were able to move from a prototype to an almost final product,” they said.

I already use a guitar tuning app on my phone, since it’s easier than carrying around a separate device, but having the benefit of mechanical automation will make the process even easier. If you’ve always wanted to learn guitar but have been put off by tuning, you’ll want to pick up a Roadie when it arrives next year.