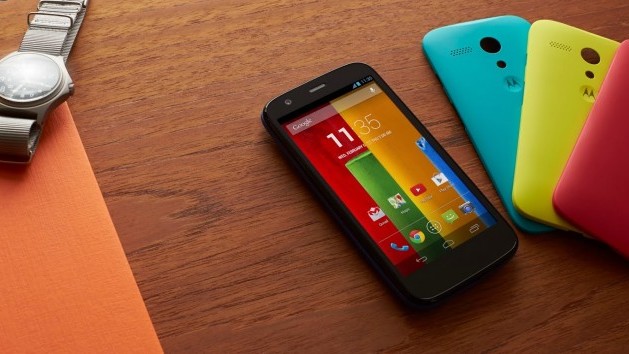 Motorola continues to rebuild its brand with the launch of the Moto G today, a more affordable, entry-level successor to the customizable, US-assembled Moto X that it launched in North America earlier this year.

In the photography department is a 5-megapixel rear-facing camera with 720p video recording, doubled-up with a 1.3-megapixel shooter on the front.

Aesthetically, the Moto G is almost identical to the Moto X. It’s understated in its design, with a slightly curved back and minimal hardware buttons. Motorola is promising 19 customization options too, using interchangeable back covers called Motorola Shells. These are joined by Grip Shells – Motorola’s take on bumper cases – and Flip Shells, which cover the front and feature a small viewing window.

On paper, the specs of the Moto G are significantly lower than the Moto X, Motorola’s current flagship Android smartphone. The Moto G will be considerably cheaper than its predecessor though – the device will be available unlocked and contract free from Motorola.com in the US, for $179/£135/€169 with 8GB of storage or $199 with 16GB.

The Moto G is available today in Brazil and select parts of Europe. Motorola will then launch the device in Latin America, Canada, the rest of Europe and parts of Asia over the next few weeks. Consumers in the US, India and the Middle East will ned to wait until early January, however.