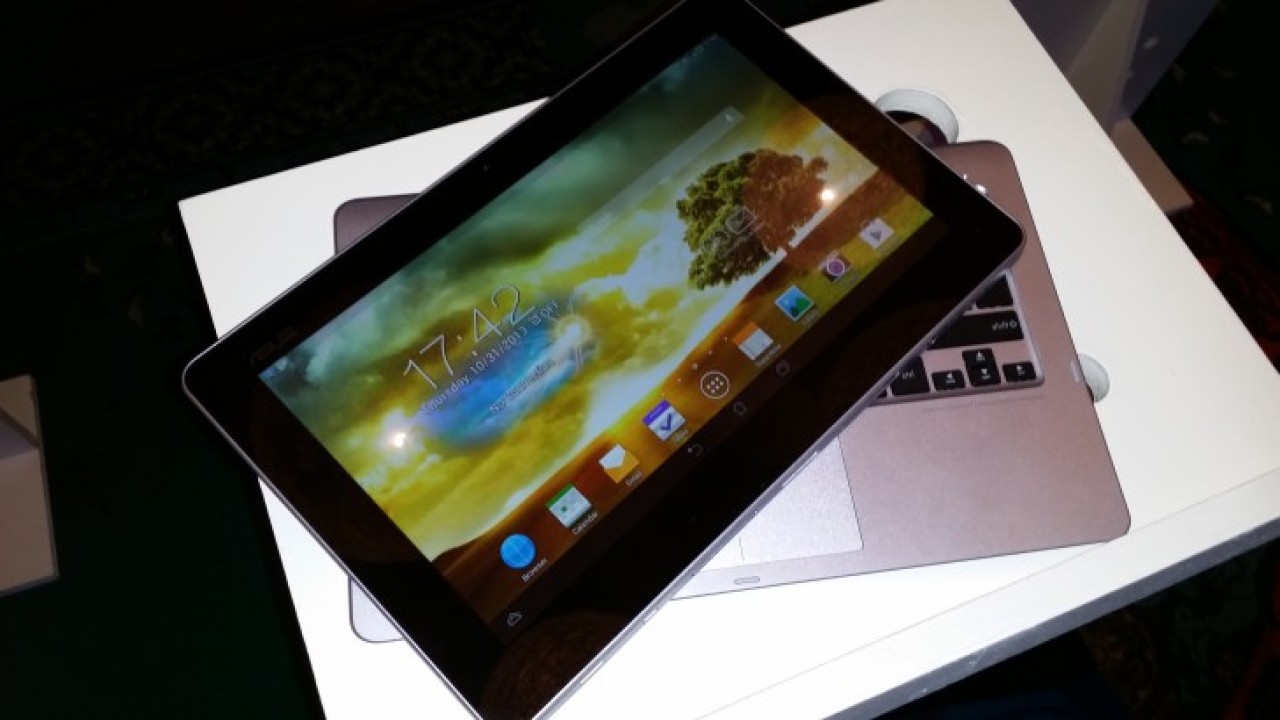 Asus’s tagline is ‘In Search of Incredible’. It used to be ‘Inspiring Innovation. Persistent Perfection’.

I hadn’t really considered the name change before last night, having popped along to the UK launch of the Asus Transformer Book T100 and Transformer Book Trio – both hybrid tablet-cum-laptop stand-ins. There are a few differences though; one is far more capable than the other.

‘Persistent Perfection’ suggests you get it right every time, which makes it all the more jarring when you don’t, whereas ‘In Search of Incredible’ is a far closer reflection of what Asus is doing with its transformable/hybrid/dual-mode devices.

The Transformer Book T100 and Trio aren’t the first of Asus’s (or other manufacturers’) endeavours with different form factors, there have been plenty before it, including the Asus Taichi – which I thought totally missed the point of the best part of Windows 8 when it launched by only having a touchscreen on the outside.

However, what I hadn’t perhaps appreciated back then was how willing Asus was to get it wrong in pursuit of its goals.

For this next generation of convertibles, Asus has endowed the Transformer Book T100 with a 10.1-inch (1366 x 768 pixels) IPS (In-Plane Switching – for better view angles) display,  an Intel Atom ‘Bay Trail’ quad-core processor and 2GB RAM. Then there’s the keyboard dock, which the main body of the tablet slots into to provide more of a laptop experience.

Size is always a big deal when considering a convertible too – after all, they are promising the best of both worlds. The T100 strikes a great compromise here and manages to deliver both keyboard and dock together for just a touch over 1kg; each half of the device just weighs a little over 500 grams.

500-odd grams held in your hand for a 10-inch tablet is perfectly respectable, nay, light enough for me. And adding the keyboard to your bag for when you do want to travel with it only takes it to just over the weight of a bag of sugar. Hardly too much to lug around.

The actual docking mechanism (above) for connecting the tablet to the keyboard feels sturdy, and allows you to adjust the screen to any angle you’d like, unlike some of its rivals, like the Surface/Surface 2, which is a clear bonus to me.

Unfortunately, and slightly oddly, Asus has managed to make the keyboard on the T100 feel very cramped and not a lot of fun to type on – there’s plenty of travel in the keys, but it’s just too small for comfort. If you ever used one of the original Asus EEE PCs, it’s a bit like that; not quite that cramped, but it’s not dissimilar. Thankfully, the company took a different approach for the keyboard on the Transformer Book Trio resulting in a much nicer, although still not perfect typing experience.

My time using the T100 was limited, so I can’t comment on the claimed up to 11 hour battery life or 14 day standby, but it does feature Asus’s Instant On technology which allows it to boot from a standing start in just a few seconds. An admirable trait in a laptop or a tablet.

Under the bonnet, you’ll find a full version of Windows 8 – not RT – like the Surface 2 and a copy of Office thrown in too. Naturally, the pre-installed Windows 8 is upgradeable to Windows 8.1 for free straight away and later models will come running it out of the box.

Whether or not Asus’s choice to use the full version of Windows rather than RT (particularly given that one of its main rivals will be the Surface 2) means that it thinks there’s no space in the world for the tablet-specific OS, I’ll leave for you to decide.

What can’t really be argued with is the £349 asking price in the UK, which includes the dock. The T100 is on sale from today.

The Transformer Book Trio is a slightly different affair and while it has ‘Trio’ in its name, it really has the same tablet or laptop modes as the T100. What that Trio refers to, however, is what results from the fact that it offers up a choice of operating systems. For tablet mode, you have Android 4.2 Jelly Bean and when it’s docked you have Windows; the first few batches will ship with Windows 8, but again, it’s upgradeable for free to Windows 8.1 – and I suggest you do that right away.

The clever bit, though, is that all of the Windows-related hardware and software is built into the keyboard, while everything needed for Android is in the tablet. This means that you can remove the tablet section and connect the keyboard up to a separate external monitor and you have a fully functioning Windows 8 PC as well as your Android tablet. When it is docked, you still have the option of switching back into Android mode too by pressing the dedicated button (shown below) on the keyboard. Two pieces of hardware, three different modes and two different operating systems – that seems pretty hybrid to me; more so than simply being something that flips over or has two screens for novelty value.

As well as being able to press the button on the keyboard to switch between Android and Windows mode, lifting the tablet out of the dock does it automatically.

Although one machine and sold together, these are two essentially separate systems. As such, there are different specs for each section.

The keyboard dock section plays home to an Intel Core i5 4200U processor, integrated Intel HD Graphics 4400 4GB of DDR3 RAM and a generous 500GB hard drive. Claimed battery life in Android mode is 13 hours, and five hours as a Windows machine.

Once again, I didn’t get much of a chance to test the machine for things like battery life, but the 11.6-inch display was certainly crisp and bright enough and the keyboard, while not perfect, was considerably more comfortable to use than the one found on the T100 – providing more generously spaced keys, but less key travel.

Impressed as I was with the Transformer Trio, there’s a word of caution: at 1.7kg when docked it’s certainly pretty weighty. The tablet section on its own is 700 grams. Throw both parts into a bag along with its charger and you’re going to feel it.

For me, it also suffers from a similar problem as the Surface 2 Pro; I wouldn’t want to use it in portrait mode at all – 11.6-inches just feels a little too much like its pushing the realms of decency for holding it up like a book. Imagine if every book you read was that size. It probably wouldn’t be the one you took on the morning commute to work, would it?

However, while I’d normally gripe about the weight being a little too much, on this occasion I’m not going to. The fact that it can offer Windows and Android – both of which can be used simultaneously by two different people if you’re connecting to an external display – make it one of the most truly hybrid ‘hybrids’ on the market. And for that, for this generation, I’ll tolerate a little extra weight.

What a difference a year makes

Almost exactly a year ago, I got my hands on the Asus Taichi, and I was disappointed in what I found. It was overly heavy and the inner screen wasn’t touchscreen – and the outside of the device where the outer shell normally is, was a touchscreen. It’s a bit of a mess to describe, and while gutsy enough, ultimately just didn’t make sense to me. A compromise too far to solve a problem that didn’t really exist.

However, with the Transformer Book Trio you can see where the lessons have been learnt. Asus knows there’s a good chance that if you’re considering a hybrid, you’re probably the sort of person that already has a smartphone. And the fact that you’re not buying Apple suggests you might have one of the nearly one billion Android devices out there; providing an Android OS alongside a full version of Windows is a masterstroke for balancing productivity and an OS people really want to use on a tablet. Plus it’s ‘hybrid’ in a way that really means something, other than carrying around a keyboard dock in your bag.

What Asus has essentially created is something that looks a lot like a MacBook Air when docked, and a fair amount like an iPad – because of the size of the bezel – when used as a tablet. Creating something that looks like that, runs Android Jelly Bean and the full Windows 8, and costs less than £900 (to be precise, it’s £899) is quite an achievement. But better than any of that, it makes sense when you’re using it, which couldn’t be said about the Taichi.