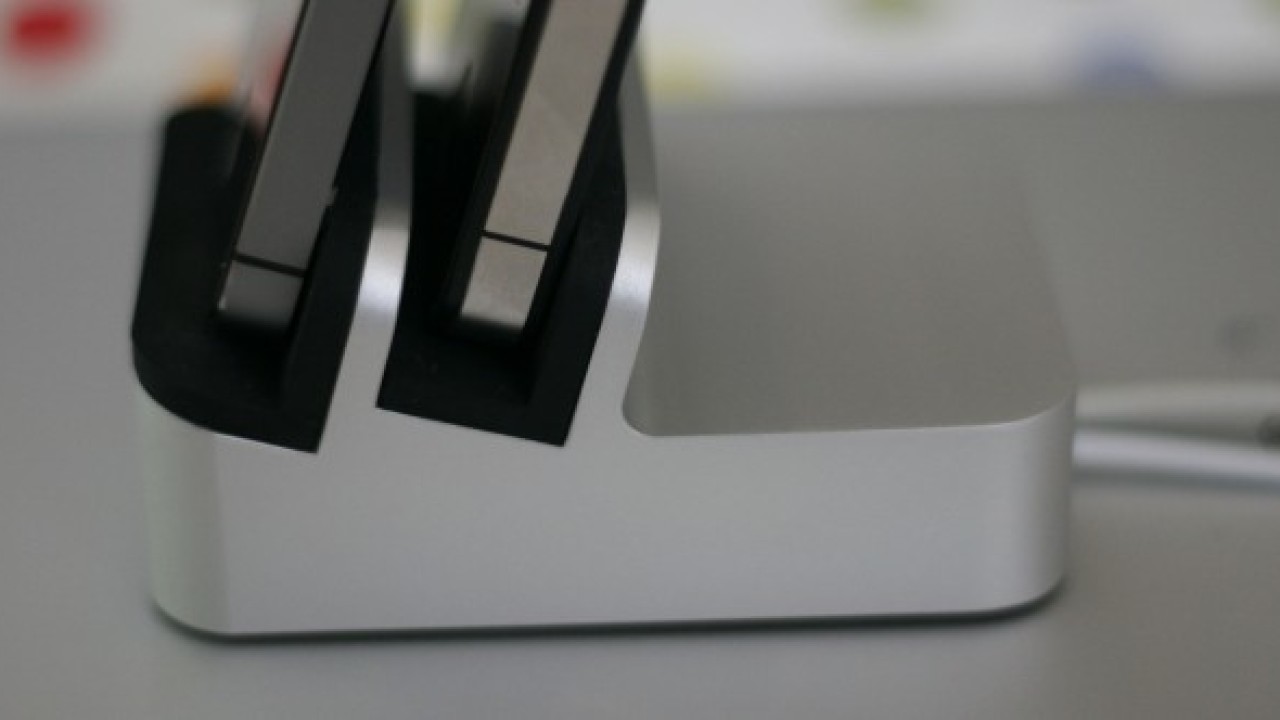 Fuz Design’s EverDock lets you dock all kinds of devices, and it looks good while doing it. The Kickstarter project, which wraps up on Thursday, has an attractive aluminum design that matches Apple’s aesthetics.

The dock will come in single and double versions and is fitted for Lightning, 30-pin dock and micro-USB connectors. It includes silicone protectors if you’re using your device bare, or you can take the pads off if you have a case.

The sample we were sent didn’t include the customized micro-USB cable, so I wasn’t able to get a perfect fit for a Moto X, but it worked fine with an iPhone 5s, iPhone 4s and iPad 2.

Unfortunately, threading the cables underneath the dock wasn’t a perfect fit on the dual-device model, as the slot for the front device is slightly off-center. It was possible to make it work with some fussing, but if I wasn’t careful, the cable would either stick out and keep the dock from lying flat or the connector would poke up and keep the device from sitting flush with the dock. The single-device version shouldn’t have this problem, as the cable slot is centered with the docking port.

Update: Fuz Design responded that the cable fits if pulled tight before tucking into the slot. I expressed concern about keeping the cable at an angle for exended periods of time, but co-founder Cameron Gibbs said that cables have held up during testing and actually receive less wear and tear since they’re stationary and not being pulled around.

The EverDock’s micro-suction pads served to keep it in place without making it difficult to move. I did a quick test of sticking the dock to a surface and holding it upside-down in the air, and it managed to keep its grip and hold two iPhones in place.

The dock comes in silver, space gray and gold, so it’s best-matched for iPhones and iPads. Backers who pledge at least $49 will receive the single-device version, while a $69 pledge will include the Everdock Duo as a reward. The two models will retail for $69 and $89, respectively, once they go on sale.

If you’re interested in backing more crowdfunded smartphone docks, take a look at the Sarvi Dock and the Spool Dock projects.